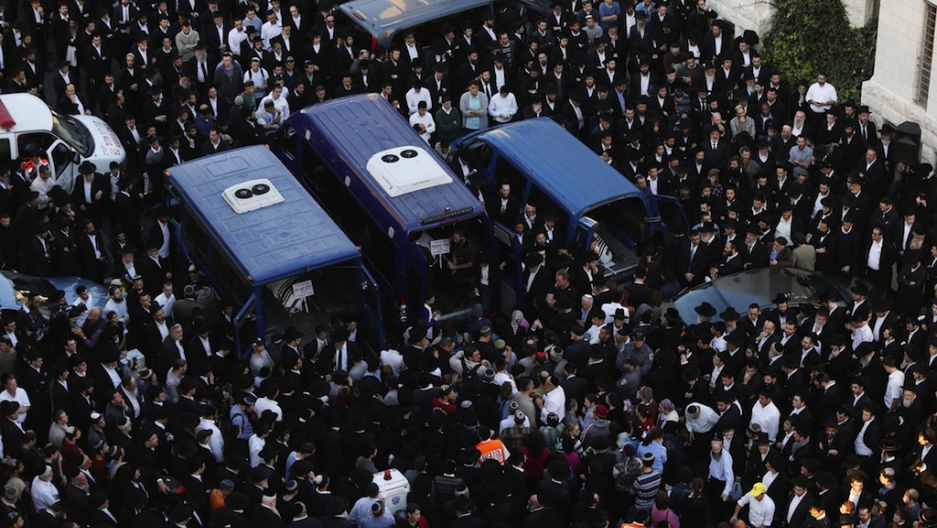 Ultra-Orthodox Jews mourn three of the victims of an attack by two Palestinians on Jewish worshippers at a synagogue in the Har Nof neighborhood in Jerusalem. The Nov. 18, 2014 attack was the deadliest in the city in years.
Credit: Gali Tibbon
Share

JERUSALEM — Two Palestinian men stormed into a synagogue in Jerusalem on Tuesday, where they killed four rabbis and injured eight with knives, axes and guns in the city’s deadliest attack in years. A policeman died later of his wounds.

Witnesses described a chaotic scene during the 7 a.m. attack as the two gunmen first opened fire outside, then entered the building and began attacking worshippers. The attackers were shot dead minutes later by police.

Emergency workers said the slain victims lay outside in pools of blood, still wrapped in their prayer shawls.

“This will force all of us to wake up. This will shake the country, the Israeli people,” said David Laniado, who was across the street when the shooting started.

It was the latest in a series of high-profile attacks in Jerusalem over the past month, which both Israeli and Palestinian leaders seem largely powerless to control. The attackers have mostly been individuals, acting without the direction of any organized group. And their motives have been increasingly religious — driven by concerns over the status of the Temple Mount/Haram al-Sharif, a site sacred to both Jews and Muslims.

The attackers were identified as two cousins, Oday Abu Jamal, 22, and Ghassan Abu Jamal, 32, from the Jabal al-Mukaber neighborhood in East Jerusalem.

The Popular Front for the Liberation of Palestine, a secular group that is well past its heyday, praised the attack and said the two men were its members. Hani Thawbta, a PFLP leader in Gaza, told Reuters: “We declare full responsibility of the PFLP for the execution of this heroic operation conducted by our heroes this morning in Jerusalem."

Hamas also praised the attack, and urged Palestinians to commit more of them.

Relatives said the cousins did not receive direction from any group, but were simply “fed up” with the situation in Jerusalem. “They weren’t terrorists … they just couldn’t take it anymore,” said an uncle, who called himself Abu Saleh.

They weren’t terrorists … they just couldn’t take it anymore.

The city’s occupied east has been convulsed by unrest since July, when a Palestinian teenager was burned alive in revenge for the killing of three Jewish Israelis in the occupied West Bank. Riots have continued almost nightly since then, with local youth attacking police and passing vehicles.

Over the past month the violence has spread, with two hit-and-run attacks and the attempted assassination of a right-wing Jewish activist. There were also stabbings in Tel Aviv and the West Bank, and several days of riots in the north after the police shooting of a Palestinian man. Ten people have been killed since Oct. 22, including Tuesday’s attack.

A key cause of the unrest has been a series of visits by right-wing activists to the mount. Israeli Prime Minister Benjamin Netanyahu has said repeatedly that he does not plan to change the status quo there, which allows Jews to visit the site but forbids them from praying.

But Palestinians fear those promises will be short-lived. The makeup of the Israeli government is becoming increasingly religious and right-wing, and activists fear it will cave to pressure to change the status quo and limit Muslim access to the site.

The activist targeted for assassination last month was Yehuda Glick, an American-born Jew who lobbies for the construction of a third Jewish temple on the site, a step often described as requiring the destruction of the Muslim sites there.

The families of several Jerusalem attackers have said their relatives were driven by the unrest at the compound. Israeli politicians, meanwhile, implied that Tuesday’s attack would make them redouble their efforts to pray on the mount.

The synagogue attack drew a sharp reaction from Netanyahu, who vowed to “respond harshly.” Authorities have already deployed a thousand additional police to Jerusalem since late October, and arrested more than 1,300 since early July, so far with little effect.

Netanyahu has also reinstated the practice of punitive home demolitions, which was discontinued in 2005 after the army concluded it had no deterrent value. On Tuesday he ordered the homes of the synagogue attackers destroyed, and several other families are facing similar orders.

He was quick to blame Palestinian President Mahmoud Abbas on Tuesday, calling the attack “a direct result of Abbas’ incitement.”

Abbas, though, has relatively little influence over East Jerusalem, a territory he cannot even visit without Israeli permission. In interviews over the past month, Jerusalemites expressed nothing but disdain for the Palestinian Authority leader.

“He has his capital in Ramallah already. He doesn’t care about us here in Jerusalem,” said Mahmoud Abdel Qader, a resident of Silwan, south of the Old City.

This may be the largest concern for both sides. The Palestinian leadership has no control over events in Jerusalem, and elsewhere in Israel. The Israeli government, meanwhile, has little to offer; talks with the Palestinians are stalled, and an ever-widening crackdown in East Jerusalem has done little to stem the unrest.

“The government, I don’t know what they can do,” Laniado said. “There’s no way to resolve this.”