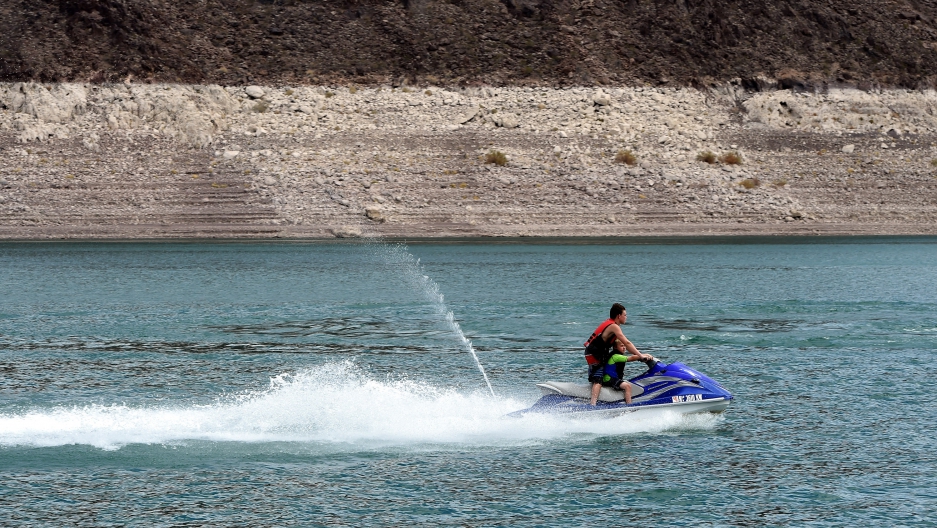 A visitor rides a personal watercraft in front of mineral-stained rocks in the Lake Mead National Recreation Area, Nevada in July 2014. A 14-year drought in the Southwestern United States and a dwindling supply of water from the Colorado River has left a white 'bathtub ring' of mineral deposits left by higher water levels on the rocks around the lake as high as 130 feet. The National Park Service has been forced to close or extend boat launch ramps and move entire marinas to try to keep up with the receding water levels.
Credit: Ethan Miller
Share

Editor's note: This essay is the first in a series, “Conservation Innovation: Voices of a New Generation,” which has been produced by the Lincoln Institute of Land Policy in collaboration with The GroundTruth Project on GlobalPost. The essays were written for presentation in Sydney, Australia during the November 2014 World Parks Congress organized by the International Union for the Conservation of Nature.

COLORADO SPRINGS, Colorado – The western and southwestern United States is gripped in a crippling drought. For the Colorado River, one of the most important water sources in the United States, the story is increasingly dire. Experts argue that regional water demand has already reached what the river can supply.

Years of drought have lowered storage levels in reservoirs along the Colorado to dangerously low levels, and a ratcheting series of ever more stringent water use regulations is likely to be imposed throughout the American Southwest in years to come.

Overuse of the resource has taken its toll on the landscape as well. The Colorado River Delta, where a mighty flow of fresh water once met Mexico’s Sea of Cortez, has virtually evaporated in the late 20th century. Where the Colorado River had once been the source of life to one of the world’s most significant estuaries, essential to transcontinental bird migration routes and the lives of vibrant human communities, a mostly dry riverbed has been left. Bird life is now isolated to exceptionally salty lagoons. Long, desolate patches of cracked mudflats and invasive salt cedars are taking over.

The apportionment of the Colorado River to seven Western US states was codified in 1922. Mexico was allocated a share with the signing of an international treaty in the 1940s. The nearly 100-year-old Colorado River Compact binds these stakeholders together, but the document may lack the flexibility to address the West’s water crisis.

Follow the river’s course south from its alpine headwaters to the deserts of southern California and Mexico and you’ll encounter a huge and interconnected network of farmers, adventurists, energy producers, municipalities and their residents tied to the Colorado River and its tributaries. Nearly 40 million people across the West rely on this river.

In 2011 and 2012, the State of the Rockies Project, based at Colorado College, set out to do just that, aiming to promote a landscape-scale understanding of the immense watershed. By addressing some of the basin’s key issues – its ecology, legal framework, and culture, as well as its agricultural, industrial, commercial and residential uses, we worked to convey to citizens and policy-makers the complexity of the situation.

We also worked to better understand opportunities for cooperation being devised by groups such as Raise the River, a joint effort of the Sonoran Institute, Environmental Defense Fund, National Fish and Wildlife Foundation, the Redford Center, the Nature Conservancy and Mexican partner Pronatura Noroeste. They, and myriad other groups, have worked tirelessly over the past several decades to find ways to restore the Colorado River Delta.

In addition to more traditional student-faculty collaborative research, we partnered with two recent Colorado College graduates, Will Stauffer-Norris and Zak Podmore, to promote their epic, 1,700-mile journey in kayaks along the length of the river. Student videographers assisted in chronicling their journey and observations from the headwaters in the snowy Wind River Range of Wyoming to the parched river delta where it once consistently flowed into the Sea of Cortez.

The video’s message tells a compelling story of the two graduates enduring October snowstorms and grappling with the river’s world-class whitewater. It also shows the interconnected nature of this complex river system and how actions taken upstream have serious implications for communities and environments downstream.

The video, titled “Remains of the River,” was instrumental in helping us fulfill one of the key aims of the project — to engage college audiences across the nation by tapping into the power of new and emerging media. The film itself promoted the idea that colleges and universities have a role to play in understanding complex environmental and socioeconomic issues, and that students and young people, in general, can affect great change when thinking critically about these issues on a landscape-scale.

“Remains of a River” was presented to college audiences and at film festivals across the region. It was effective in showing how the cities of Los Angeles, Denver, Salt Lake City, and the remote mountains of Colorado, Utah and Wyoming are all connected to the great many challenges facing the river and the people who depend on its health. The video proved to be quite popular, winning several citations and awards at festivals and conferences across the nation.

Our work also found its way to more specialized audiences. The State of the Rockies Project at Colorado College was able to present our research and the video to key federal decision-makers, effectively encouraging them to find solutions for the delta’s daunting problems. The Secretary of the United States Department of the Interior Ken Salazar, United States Under Secretary of Agriculture Harris Sherman, and the head of the United States Geological Survey Marcia McNutt each came to the Colorado College campus during the 2011-2012 academic year to engage with us and see our work.

When we combined the voice of a new generation with those of seasoned advocates for the delta’s restoration, the message resonated. In November 2012, the hard work of many individuals and organizations yielded historic results. With the signing of Minute 319, an international agreement between the United States and Mexico, the two nations have settled on an experimental plan to bring water back to the delta.

In the winter and spring of 2014 this became reality as an experimental pulse flow of water was released from Morelos Dam on the US-Mexico border, and the dry Colorado River channel once again flowed to the sea.

We offered but one voice among many. As Jennifer Pitt, the Colorado River Project Director for Environmental Defense Fund stated: “it took many hands to lift the gates at Morelos Dam.” The State of the Rockies Project is nonetheless very proud to have played a small but significant role in this achievement.

In doing so, we also hope to have planted a seed of inspiration for other colleges, universities, and most importantly, students, to undertake this important work – making the voices of a new generation, deeply concerned with the future of our planet, be heard loud and clear.

Brendan Boepple is a 2011 political science graduate of Colorado College (CC) who now serves as Assistant Director of CC’s State of the Rockies Project. Having grown up in Connecticut, he has, during his years in Colorado Springs, come to love the western landscape. He plans to pursue graduate studies in the next several years.