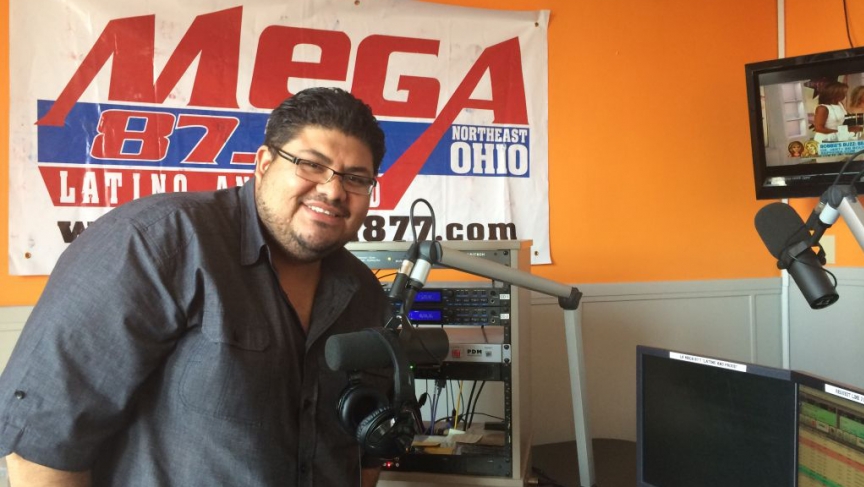 Daniel Melendez is program director for TSJ Media, which runs three Spanish-language radio stations in Ohio, including La Mega, and puts out out Spanish-language newspapers and magazines all over the Midwest.

Cleveland prides itself on being a music-rich city. It's where DJ Alan Freed coined the term “rock and roll,” and it’s the home of the Rock and Roll Hall of Fame and Museum. Now you can add Latin American music to the mix.

Spanish-language radio stations, which are common on the coasts, have begun popping up in places like Cleveland. Less than a year ago, one of the city’s alternative rock stations switched formats to focus on Spanish-language music, and the new La Mega 87.7 FM is a hit among Spanish-speakers in Northeast Ohio.

“I’m Puerto Rican, but listening to La Mega all day long, you can listen to Mexican, Colombian music, all types of music,” says Ivan Memo, the manager of Las Villas Deli and Pastry in Cleveland.

But that diversity is also a challenge for the young station. La Mega is Cleveland's only Spanish-language music station, and it has to cater to a wide range of backgrounds.

“When you’re the only station and you’re trying to have Central Americans and Mexicans and Puerto Ricans and Dominicans and Cubans, you got to understand [that] just because it’s the same language, it’s [not] the same music,” says Daniel Melendez, program director for Cincinnati-based TSJ Media, which runs La Mega and two other stations in Ohio.

Each country has its own style: Puerto Ricans, who make up most of Cleveland's Spanish-speaking community, like merengue; in the Dominican Republic, it’s all about salsa; in Mexico, tastes can be different from city to city.

“I would think Cleveland should have three or four Spanish-language stations, because of the diversity we have encountered,” Melendez says. “There’s enough Hispanics to serve in this market.”

He argues the media market should grow to target Latino listeners of specific genres. All English-language radio isn’t the same, so why would Spanish-language music be any different?

But that's still in the future. In the meantime, La Mega is trying its best to mix up its playlist and satisfy its diverse audience — and keep a local focus as well. La Mega is the flagship Spanish-language station for the Cleveland Cavaliers, and — love him or hate him — LeBron James has a way of uniting disparate communities.

“I hope, maybe in another year, we have a lot more stations, a lot more newspapers, a lot more media interested in this community,” says Ivan Memo, the deli owner. But, he adds, La Mega is a great start.