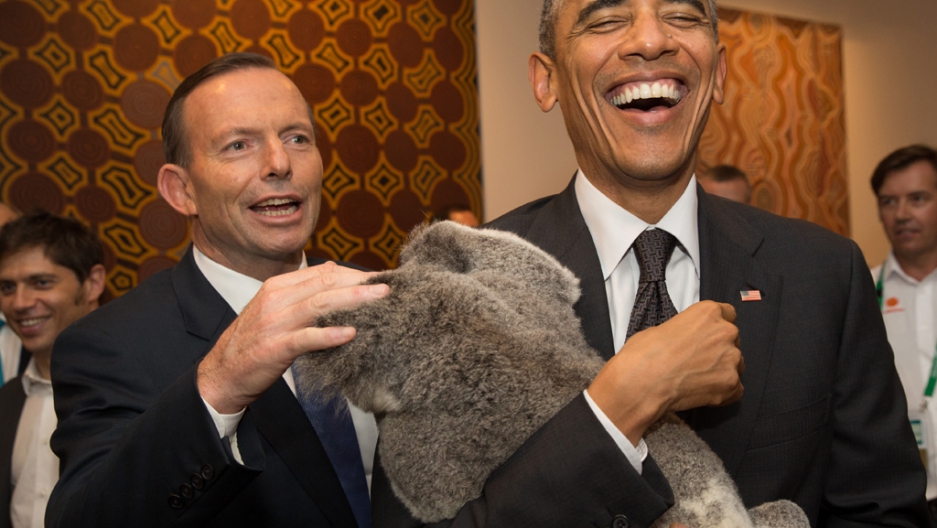 The G20 summit kicks off this weekend, where the world's biggest economies come together to make the sorts decisions that impact us all in language most of us can't really understand.

On the agenda for the summit is "boosting world growth, fireproofing the global banking system, and closing tax loopholes for giant multinationals."

Noticeably absent from the agenda is climate change, even though two G20 members, China and the US, this week brokered a huge deal to bring down global carbon emissions. Still, Australian Prime Minister Tony Abbott, the summit host, decided to keep climate change off of this year's agenda. Perhaps a certain magazine cover helped him miss the big climate news, but it might have a little more to do with his love for coal. Either way, protesters are prepared to make it clear to G20 members that the environment shouldn't be an afterthought.

Some of the countries represented at this weekend's summit are also some of the biggest users of non-renewable resources. We've created a series of charts that show you the top ten global consumers of petroleum, natural gas, and coal. To give you a little more context, we've also added how much of the total supply of each energy type each nation produces, and what percentage of the global population each nation makes up.

With the summit's participants representing 85 percent of the world's GDP and 75 percent of global trade, and environmental scientists warning of the environmental nightmare we're hurtling toward right now, this is definitely the sort of conversation that shouldn't just be taking place on the sidelines.

Here are some of the countries that might need to get together and discuss a way to kick their environment-killing energy habits. The top petroleum consumer in the world is the United States, which uses nearly double the amount of petroleum China does. This statistic gets even more striking when you factor in population numbers: The US consumes 20 percent of total petroleum with only 312 million people, while China manages to spread 11.2 percent of the world's petroleum among its population of 1.3 billion.

The only two nations on this list that actually produce more oil than they consume are Russia and Saudi Arabia, both of whom are top trading partners to the United States and the European Union. The two nations don't just cover their own needs — they have A LOT of petroleum left over. This probably makes them less inclined to shift to renewables. While Russia is the fifth largest producer of hydroelectric energy in the world (a renewable resource), the nation has barely scratched the surface with other renewable sources of energy. Saudi Arabia generates none of its electricity from renewable resources. China has a serious coal problem. Nearly half of all the coal consumed on the planet is consumed in China. It's little comfort that they're also producing that much coal, since it's one of the least environmentally friendly non-renewables. The US Environmental Protection Agency warns: "When coal is burned, carbon dioxide, sulfur dioxide, nitrogen oxides, and mercury compounds are released. For that reason, coal-fired boilers are required to have control devices to reduce the amount of emissions that are released." Even so, the United States still consumes about one-tenth of the world's available coal, and produces 11.7 percent of the supply. The real worry with coal, though, is in developing nations in Asia. Places like India and China find coal to be a cheap source of energy as their economies industrialize. China, in fact, is solely responsible for 69 percent of the 3.2 billion-ton increase in coal production in the last ten years. Burning that much coal that fast can have an immediate impact on the environment — it's a major contributor to China's air quality issues.