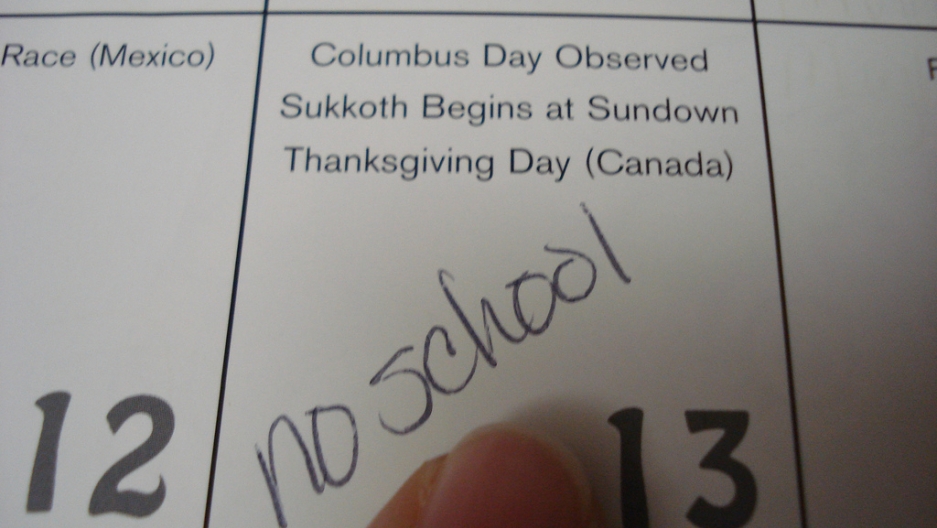 Muslim groups say their religious holidays belong on school calendars alongside Jewish and Christian holidays that many districts take off.

How do public schools decide which holidays are worthy of a day off? In many states, the law requires schools to break for Christmas — but other holidays are left up to individual districts.

The Muslim community in Montgomery County, Maryland, has been asking the school board to recognize the Eid holidays. Instead of recognizing the holidays, this week the school board instead voted on a related proposal: To strip all religious references from the school calendar.

“There have been efforts underway for over a decade by the local Muslim communities to have the Eid holiday added on to the school calendar,” says Zainab Chaudry, the Maryland uutreach manager for the Council on American-Islamic Relations and co-chair of the Coalition for Eid. “Unfortunately, their efforts have been met with a lot of resistance."

Students and teachers in the county still have days off for major Jewish and Christian holidays, but the school calendar will no longer mention the holidays themselves. The Montgomery County school board did not respond to repeated requests for comment.

"We’re not seeking special rights for these students — we’re seeking equal rights," she says, arguing that the school calendar should reflect the diversity of the community. “The Muslim community in Montgomery County is being asked to meet demands that are different from their Jewish and Christian friends.”

There aren’t precise figures on the number of Muslim families in the Montgomery County school district, but it’s estimated that Muslims make up about 10 percent of the county’s population. Chaudry says that the parents of Muslim children feel as if their children are being treated as “second-class citizens.”

Muslim students in Montgomery County are excused from school during their religious holidays, but they are also still marked as absent and may miss important classroom instruction, exams, or projects

According to Chaudry, the Montgomery County Muslim community did not ask the school board to remove all religious holidays from the calendar. “We respect the right of our friends, neighbors, and peers to be able to celebrate their holidays and do as they choose,” she says. “But federal law also grants the right for reasonable religious accommodation.”

Though the division between Jewish and Christian holidays and Islamic holidays remains a contentious issue, some wonder why public schools are recognizing religious holidays at all.

“The truth is, under the First Amendment, a public school may not close for religious reasons — period,” says Charles Haynes, director of the Religious Freedom Center of the Newseum Institute. “The problem is that Christian holidays were baked in to the calendar when public schools were founded by Christians.”

Haynes says that school calendars have become more secular over the years, even if many do recognize Christmas Day, a national federal holiday in the United States.

“About 40 or 50 years ago, many public schools started also including Jewish holidays as days off,” he says. “I don’t know if they did their homework and came up with good, secular educational reasons for doing that.”

Haynes says that under current law, schools may shut down on religious holidays — if they have secular and educational reasons for doing so. “If the school calendar closes the school on Christmas or Yom Kippur, they can certainly call it that,” Haynes says. “But the reason they close on Yom Kippur can’t be that they’re accommodating the Jewish community.”

According to Haynes, many schools close on religious holidays because they may not function properly on those days if many students and teachers choose to take the day off. Instead of closing with the specific reason of observance, Haynes says many schools choose to close on religious holidays to protect the educational experience of all students, regardless of what religion they practice or holiday they observe.

“To take off the religious name off the holiday makes everyone unhappy and it doesn't solve anything,” he says. “The real issue is, ‘Why are we closing school?’”

Haynes argues the way forward is to fix absence policies and not to keep amending the school calendar.

“It’s impossible, as the United States grows more religiously diverse, to keep closing days because of the growing populations of various groups,” he says. “Today, we’re in a position where we have so many different religious groups that we need a good policy that protects their right to celebrate their holiday without penalty, but no longer adds more closing to the school year.”