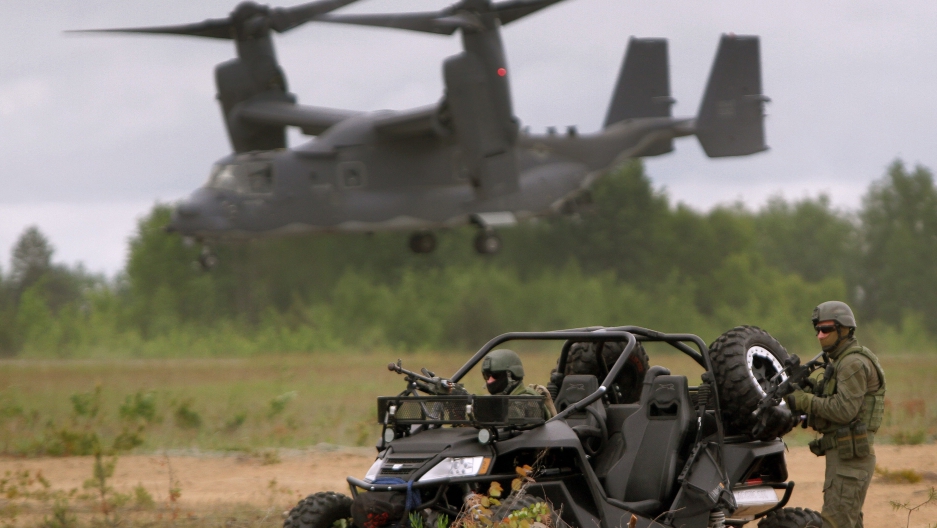 Deterrence: Lithuanian special operations forces in an exercise with US and other NATO allies last month.
Credit: Petras Malukas
Share

BERLIN, Germany — Five years ago, a group of renowned European leaders, including former Czech President Vaclav Havel and Polish ex-President Lech Walesa, published an open letter to President Barack Obama warning him against abandoning his allies in central Europe in order to cozy up to Russia.

As a new generation of central European leaders strives to balance the demands of Brussels and Washington with their vulnerability to Moscow, commentators and officials in the United States are expressing their concerns about losing the central region to Russian influence.

Some worry that Cold War-style US rhetoric over Ukraine may be alienating the countries it’s supposed to help secure.

"Across the region, the twin cancers of democratic backsliding and corruption are threatening the dream so many have worked for since 1989," she said, referring to the year the Berlin Wall fell and central Europe broke free of Soviet control.

"And even as they reap the benefits of NATO and EU membership, we find leaders in the region who seem to have forgotten the values on which these institutions are based."

“In reality, a big chunk of the NATO alliance has quietly begun to lean toward Moscow,” he wrote in the Washington Post.

To be sure, the days of blinding love for Europe are over as NATO's newest members realize that the “benefits” Nuland mentioned also come with costs.

In stark contrast to Havel's distrust of Moscow — the former dissident playwright spent four years in prison under communism — the current Czech president, Milos Zeman, founded his Party of Civic Rights in 2009 with the financial support of Russia's Lukoil. Now he's under fire for a foul-mouthed defense of Putin's jailing of Pussy Riot.

This summer, Czech Prime Minister Bohuslav Sobotka opposed Poland's call for expanding NATO's presence in Europe in response to Ukraine’s crisis, while his Slovakian counterpart Robert Fico obliquely compared the idea of stationing NATO member troops on his country's soil to the Soviet invasion of 1968.

Even Austria, which was never part of the Soviet Bloc, welcomed Putin with broad smiles while Brussels was pushing for tougher sanctions in June. Vienna, like Budapest, is steadfastly moving ahead with plans to help construct a natural gas pipeline that would link Russia to southern Europe against EU objections.

Then there’s Hungarian Prime Minister Viktor Orban, who recently said he aims to make Hungary an “illiberal state” like China or Russia rather than emulating his European neighbors.

But experts say it's wrong to conflate his extreme position with the more nuanced maneuvers of other central European countries.

Some believe Washington’s rhetoric have been more threatening than reassuring for them.

Outside Budapest, central European leaders are walking a tightrope because of an understanding that despite its tough words, NATO may not be as willing to confront Russia militarily as they once believed, says Carnegie Europe director Jan Techau.

“There's a very strong feeling at the moment, particularly with the Obama administration, that people in Washington don't really care at all about cntral Europe,” he says.

In an effort to help pressure Putin to back down in Ukraine without a military confrontation, NATO wants its members to stand united over economic sanctions and threats of a Russian energy cutoff.

At the same time, some of those members increasingly see NATO as unable or unwilling to defend Europe even as it asks them to fight outside its borders — urging Poland to send soldiers to Afghanistan, for example — but declining Warsaw’s requests for a missile defense shield and its own NATO base.

Others say a more robust response to Putin's aggression would bring about even more serious consequences.

“Basing in central Europe is not crucial,” Michael Emerson, former EU ambassador to Moscow, said in an email. “Rather, the strategic choice not to go to war over Ukraine has been the issue, but who would say that was a miscalculation?”

But if relative caution has so far largely prevailed, growing demand within Ukraine to join NATO could soon raise the ante for the military alliance.

Some believe NATO's eastward expansion in the 1990s has already pushed it to a crisis point. “Now it's facing the consequences of the expansion territorially and conceptually," Feffer says.

He advocates a new security architecture that would include Putin in NATO's decision-making process before rather than after conflicts arise. Beefing up the Organization for Security and Co-operation in Europe could help, he says.

Europe’s economic crisis has also prompted countries in the region to try to reduce their westward focus.

The Czech Republic once sought to bind its economy to Germany's to cement its place in Europe. Now that a third of its exports go to Germany and two-thirds to the EU, Prague is looking to reduce what it has come to see as a kind of economic vassalage, says Czech journalist Ondrej Soukup.

More from GlobalPost: History is a never-ending battle — and Russia is always victorious

“Russia is the most viable other option,” he says.

That doesn't necessarily mean an embrace of the Russian model, however.

Despite the president's dislike for Pussy Riot, the Czech Republic's rejection of new NATO forces doesn’t reflect some new allegiance to Putin or a budding love for curbing freedom of speech, says Vaclav Bartuska, Czech ambassador-at-large for energy security.

“Brussels is our second capitol,” he says, “not Moscow.”