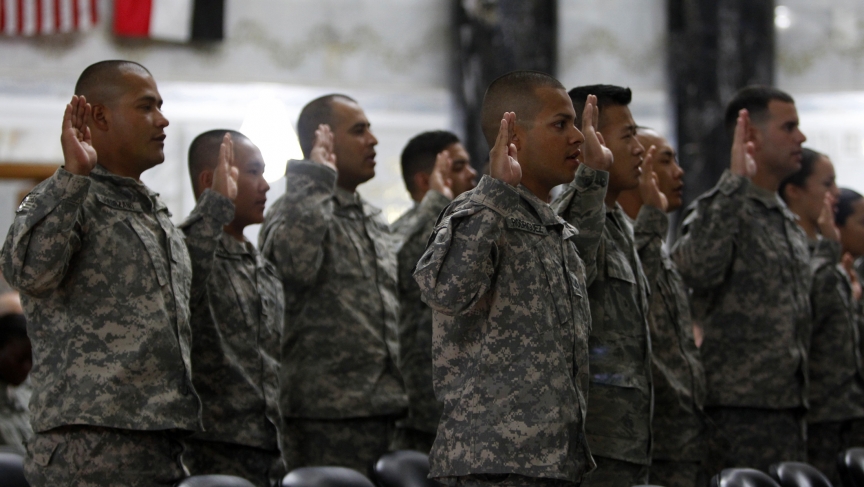 Servicemen from the US military take an oath during a naturalization ceremony at the Al-Faw Palace in Baghdad's Camp Victory on July 4, 2011.

Hector Barajas has a strange relationship with the United States.

He's a proud former US Army paratrooper who served for six years in the famed 82nd Airborne Division. But he now lives in Tijuana, Mexico, sent back to the country of his birth by the country where he lived and for whom he served. He's one of thousands of former American servicemen and women who have been deported after being in the US military.

“If I die today, I can be buried as an American, and my family would be given a flag saying, ‘Thank you for your son’s service,’” he says. “We should be able to live as Americans if we’re able to be buried as Americans.”

None of those soldiers were citizens, but all had some form of legal status in the country and chose to enlist. Do so, they were told, and you'll get full citizenship. Some risked their lives fighting on the front lines in places like Vietnam, Iraq and Kosovo.

But their new lives in the States weren't easy once they got out of the military. And those who committed crimes — anything ranging from serious felonies all the way down to minor offenses like cashing a bad check — were kicked out of the country.

Many, like Barajas, are from Mexico. He lived there only briefly as a child, but after he was accused of attempted murder, he was sent back across the border in 2004. Barajas ended up pleading guitly to the charge of discharging a firearm, but he says he has served his time and deserves to return to his real home — the United States.

“A lot of these men, when they went to these wars and volunteered, they were willing to leave their children without fathers and mothers, or die in combat like many men did — and their children are left fatherless," he says. "I think separating them from their families is like turning their back on them and it’s unjust.”

But the law isn't lenient in this case. According to the Illegal Immigration Reform and Immigration Responsibility Act of 1996, any person who isn't a full citizen who commits a crime — even a minor offense — loses his right to stay in the US. The promises of citizenship made to these veterans, like the one Barajas got when he enlisted in 1995, don't count.

“There is a lot of promising of citizenship via recruiters and different parts of the military,” Barajas says. “A lot of the veterans — especially during the Vietnam era — they thought that when they [enlisted], they were being made US citizens, but that wasn’t the case.”

The expelled veterans can appeal their deportations, but Barajas says that process is lengthy and difficult. And during the appeal, the accused has to stay in a detention center.

"A lot of the men, they get tired of being separated from their families and just pretty much sitting in there without any bail or treatment ... so they just give up," he explains.

Banished Veterans estimates that anywhere from 3,000 to 30,000 veterans have been deported from the US, but exact numbers are difficult to obtain — the government doesn't count veteran deportees separately. And while most of these veterans are Mexican, the organization says they are working with veterans deported to 19 other countries around the world.

And as awareness of this issue grows, fellow veterans have begun to honor their comrades who can't live in the country they fought for. Earlier this week, before Veterans Day, a group of veterans in San Diego conducted a ceremony for their deported peers.

Alfred Gonzalez, a veteran who is now secretary of the San Diego All Airborne Chapter, says this was the first time American veterans recognized their fellow vets who were expelled from the US — and, he says, those soldiers deserve just as much honor and recognition as the rest of those who fought.