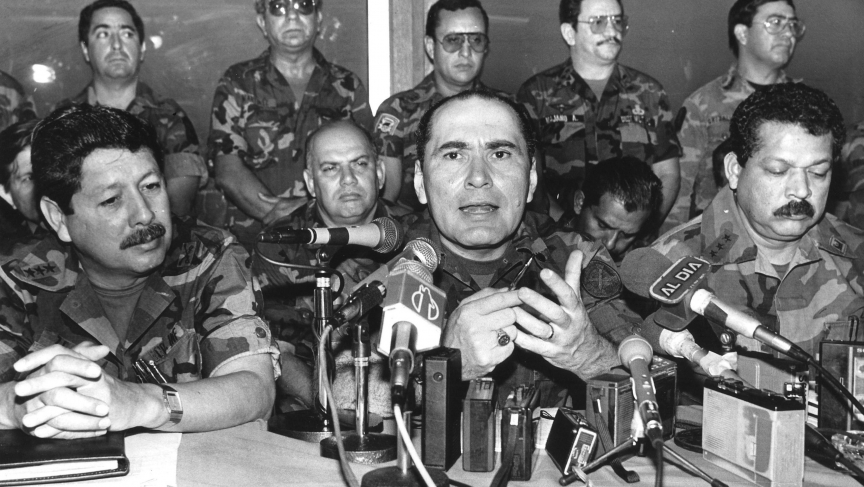 El Salvador's defense minister, General Rafael Humberto Larios, speaks during a news conference in San Salvador in a 1990 file photo. Larios and eight other former Salvadoran soldiers were arrested in 2011 for suspected involvement in the 1989 killing of five Spanish and one Salvadoran Jesuit priests, one of many such killings during the country's civil war.

Sisters Maura Clarke, Ita Ford and Dorothy Kazel, along with missionary Jean Donovan, were in El Salvador in 1980 to serve the poor and the refugees of the country's civil war. Then, on December 4 of that year, they were found in a shallow grave by a road near the San Salvador airport — apparent victims of the country's brutal military regime.

Robert White, then the US ambassador to El Salvador, was there was there when their bodies were unearthed.

“I found the town clerk, and he told me that they had heard the screams and the shots the night before, and that it was the military that had done it," White said. "You realized at that point that the Salvadoran military was out of control. They would kill anybody.”

It would take years before the people responsible for these women's deaths would be put to justice. In the meantime, the crime shook American foreign policy and exposed the brutal nature of US allies in Latin America, which was the cornerstone of President Reagan's foreign policy agenda at the time.

“It’s hard to overdramatize how important this was and how shocking it was,” says Ray Bonner, a contributing reporter for the documentary team Retro Report and a former foreign correspondent for The New York Times.

“There had been 10,000 murders in El Salvador that year, mostly students and peasants killed by the military," Bonner explains. "The archbishop of El Salvador had been killed in March — he had been murdered while he was saying a mass. But nothing caused a reaction like the killing of these American churchwomen.”

The killings put the US government in a tough position. The Reagan Administration stood firm in its support for the military government of El Salvador; Nicaragua had recently fallen to a "leftist government," and the Reagan administration was concerned its neighbors might do the same.

But even as it backed the Salvadoran government, the US had to distance itself from the incident.

“Perhaps the vehicle that the nuns were riding in may have tried to run a roadblock — or may have accidentally been perceived to have been doing so — and there may have been an exchange of fire,” said Alexander Haig, the secretary of state under President Reagan.

“To suggest that they had ran a roadblock" was absurd, Bonner says. "It was so clear what had happened. Ambassador White had been at the scene. He knew what happened, he talked to people."

But geopolitical needs trumped justice for the missionaries. “At the time, this was considered the frontline in the war against Soviet expansion and Soviet communism,” Bonner says.

“El Salvador is nearer to Texas than Texas is to Massachusetts,” President Reagan said in March 1983. “Central America is simply too close, and the strategic stakes are too high, for us to ignore the danger of governments seizing power there with ideological and military ties to the Soviet Union.”

Though the Reagan Administration believed the events in El Salvador were being influenced and perhaps even instigated by Cuba and the Soviet Union, Ambassador White believed differently.

“Ambassador White sent a 27-page cable soon after he arrived in El Salvador," Bonner says. “[White thought] there would be a revolution there even if there wasn’t Cuba. There was the poor, the dispossessed, students, and political moderates who were trying to take on the military and the oligarchy."

But White's opinion that El Salvador's unrest was a "homegrown revolution" was ignored.

"The US put it in the Cold War context — that it was part of the war against communism," Bonner says. "It’s hard to believe from this distance that we thought the security of the United States was threatened by what was going on in El Salvador.”

Check out a video of Retro Report's findings on the El Salvador killings: