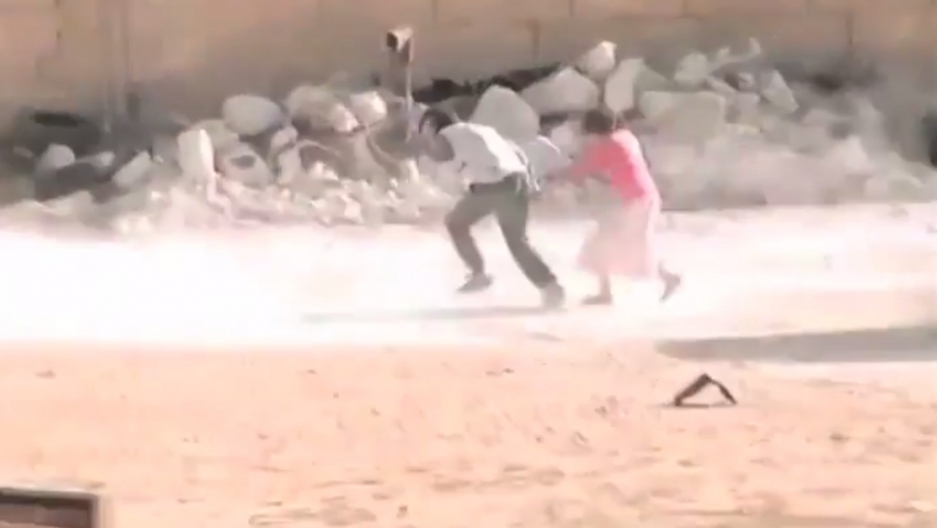 Update, Nov. 14, 2014: A Norwegian director said Friday that he and a film crew staged the video that is the subject of this story. The video does not depict real events; according to the director, it was scripted, features actors, and was made in Malta. GlobalPost stands by the information contained in the rest of the article.

When you hear that 10,000 children have been killed in the course of Syria's civil war, you're probably thinking they died in bombings and airstrikes. You'd only be partly right.

Whether it's US drone strikes in Pakistan, Israeli airstrikes in Gaza, or the Syrian government's barrel bombs over Aleppo — we are accustomed to hearing that children have been killed either accidentally or because, supposedly, the benefit of destroying a particular target outweighed the cost of non-combatant lives.

We're less accustomed to seeing children targeted in the streets by snipers.

That's been the reality for more than three years in Syria. The Oxford Research Group found that sniper fire killed nearly 400 Syrian children under the age of 17 between March 2011 and August 2013.

Now there's video that appears to capture this terrifying reality. It shows a young boy, maybe eight years old, running through live sniper fire to reach a young girl who's frozen in cover behind a burned-out car. At one point, he falls to the ground after a shot's fired at him, but he jumps up and keeps moving. He grabs the girl by the hand and they run to safety as bullets kick up clouds of dust around them.

The video was uploaded to YouTube on Nov. 10. It's been reposted by the Shaam News Network, a pro-opposition group that aggregates citizen journalism related to the Syrian conflict.

GlobalPost has not independently verified the video, and this story will be updated if new information becomes available.