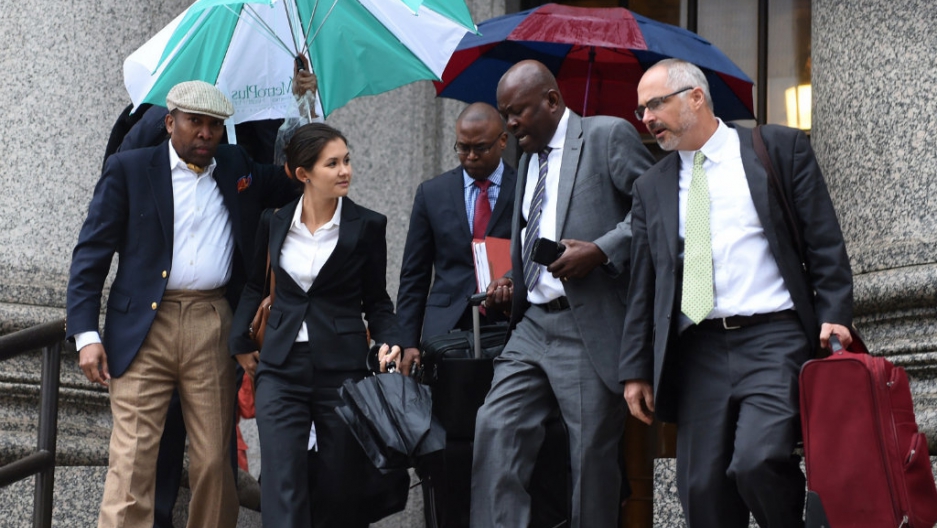 Attorneys Beatrice Lindstrom (2nd L) Marioa Joseph (2nd R) and other attorneys exit the federal courthouse in New York on Oct. 23, 2014 in New York. Cholera has killed more than 8,500 people and infected more than 700,000 in Haiti since 2010, when the plaintiffs allege it was introduced by UN peacekeepers, dispatched in the wake of a devastating earthquake.
Credit: DON EMMERT
Share

CAMBRIDGE, England — Late last month, attorneys argued before the US Federal District Court in Manhattan that the United Nations is not immune from liability for the spread of cholera throughout Haiti. The medical science is clear on this point, and none but the UN itself disputes this conclusion.

Yet in denying its role in the Haitian cholera epidemic that has killed more than 8,500 and sickened hundreds of thousands more, the UN jeopardizes its own future.

This much is true: the UN introduced cholera into Haiti in 2010 when it sent peacekeepers from Nepal to the country without constructing adequate sanitation facilities. When they arrived in Haiti, these peacekeepers, assigned to the United Nations Stabilization Mission, were infected with cholera. Until then, Haiti had not experienced a cholera outbreak in more than 200 years.

The Nepalese troops were neither tested nor treated for cholera prior to their deployment. This is despite UN knowledge that Nepal was experiencing a surge in infection at the time, and that the earthquake that ravaged Haiti left the country highly vulnerable to cholera.

UN peacekeepers were stationed on a base in rural Mirebalais where extremely unsanitary conditions existed — a corrupt US contractor knowingly allowed human waste to flow through leaking sewage pipes to be dumped in an open-air unfenced pit, contaminating a tributary that runs just meters from the base into the Artibonite River, Haiti’s primary water source.

Independent scientific studies were conducted by the US Centers for Disease Control and Prevention; by Dr. Renaud Piarroux, a leading cholera epidemiologist; by Yale Law School and Yale School of Public Health; and by a panel of independent experts appointed by the UN. The results all point to the UN’s mission in Haiti as the source of the cholera epidemic.

DNA testing further showed that the cholera strain is a perfect match to a strain active in South Asia where the Nepalese soldiers had been stationed.

Neighbors in the area also reported foul odors stemming from the camp. Later, international journalists, official investigators and the UN’s own investigation revealed that the sewage piping at the base was “haphazard” and “inadequate,” and that all wastes from the base were dumped into an open-air pit.

Accountability is the sine qua non of human rights; there can be no human rights without accountability. The International Court of Justice has a universal and undeniable interest in the fundamental human right to life, and consequent remedies for taking life.

This is why the UN signed the 2004 Status of Forces Agreement in Haiti, and expressly agreed to intentionally be bound to a claims commission that would determine accountability and compensation for causing killings and injuries. Yet the UN is on a path to destroy its core principle by violating this binding agreement, ignoring international law and denying the fundamental human rights of Haitians to appropriate remedy for this loss of life.

There are voices within the UN, and from scholars and scientists globally, agreeing that the United Nations is obligated to be held accountable, and demanding that the UN meet its mission to advance global human rights. Among them is its own high commissioner for Human Rights, Navi Pillay.

“The UN’s ongoing unwillingness to hold itself accountable to victims violates its obligations under international law,” according to a 2013 report by the Yale Law School and Yale School of Public Health. “Moreover, in failing to lead by example the UN undercuts its very mission of promoting the rule of law, protecting human rights, and assisting in the further development of Haiti.”

Reckless cholera dumping allowed by the UN has killed more than 8,500 Haitians and injured more than 700,000. The UN must be shaken from its institutional complacency and decide whether it would rather risk extinction than be held accountable.

Tim Howard is a professor of international law at Cambridge Graduate University and lead attorney for more than 2,600 Haitian families in a lawsuit filed in US District Court for the Eastern District of New York against the United Nations.