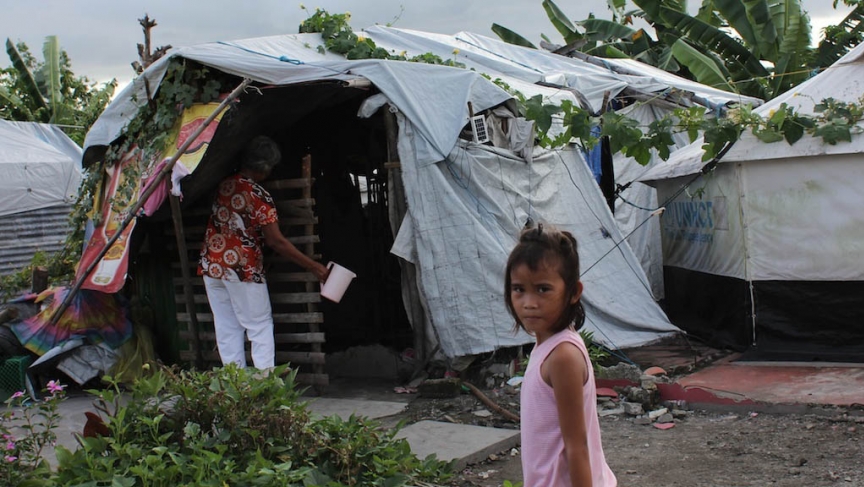 One year after Typhoon Haiyan, about 5,000 people still live in evacuation centers or tents like this one in Sandy Beach, near Tacloban.

It has been a year since Typhoon Haiyan slammed into the central Philippines a year ago, killing more than 6,300 people and displacing another 4 million. The cleanup effort by the Philippine government and international aid agencies is ongoing.

They've been providing aid to the hardest-hit coastal areas, places like Sandy Beach, a small, seaside neighborhood in Tacloban. When I visited, women chatted while children ran around an open air chapel made out of salvaged tin and wood.

Gigi Clariza’s baby was two months old when the typhoon struck this city. Now she’s walking. "Even with things the way they are, we’re happy," Clariza said. 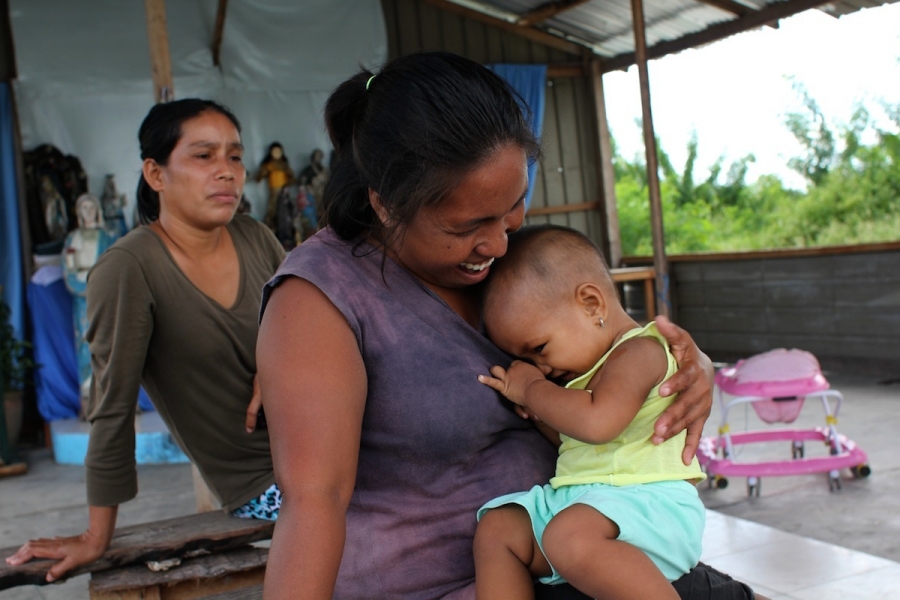 That’s hard to imagine. Sandy Beach bore the brunt of the typhoon. Winds up to 195 mph tore up trees and homes, and a massive storm surge drowned hundreds of people.

Clariza showed me around the neighborhood, saying it used to be a densely-packed slum. Today, the neighborhood is nearly empty. "Before, this used to be concrete houses, all around. When Haiyan came, they were all crushed. Not even one was spared," she said.

But the debris has been cleared, and the ruins of houses are covered in flowering vines and surrounded by wispy grasses. 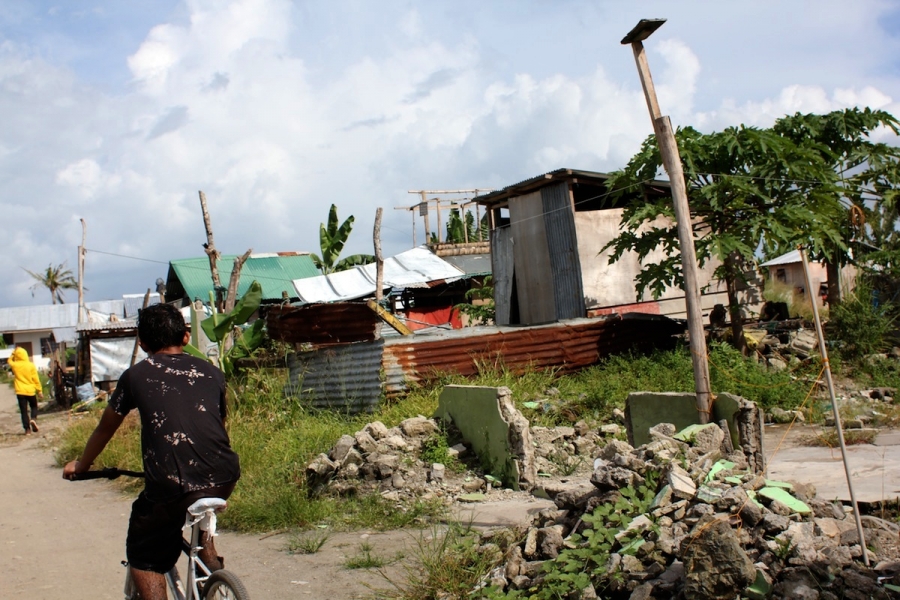 Clariza used to own a little store here, but that's also gone. With all the newly open space, she and the neighbors are doing something they never could do before: garden

They’ve planted rows of crops across from the chapel: string beans, okra, bitter melon, yam greens and water spinach. In one corner are blades of lemongrass, bunches of horseradish greens and long purple eggplant.

The garden was born of necessity, but Clariza is still proud of it. "I plant vegetables now, so even if we don’t have food, we always have a little something to harvest," her husband says. He now sells popsicles for a living, which doesn’t bring in much money.

But the garden is just a stopgap, and one that can't disguise bigger problems. The government used to distribute sacks of rice after the storm, but people in Sandy Beach say they haven’t received any relief goods since May.

"Things are harder now," Clariza says. "But there’s nothing for us to do but bear it. That’s how life is. We said to ourselves, we need to work hard, find our own way. We’re not going to depend on relief goods, because we’re not getting any." 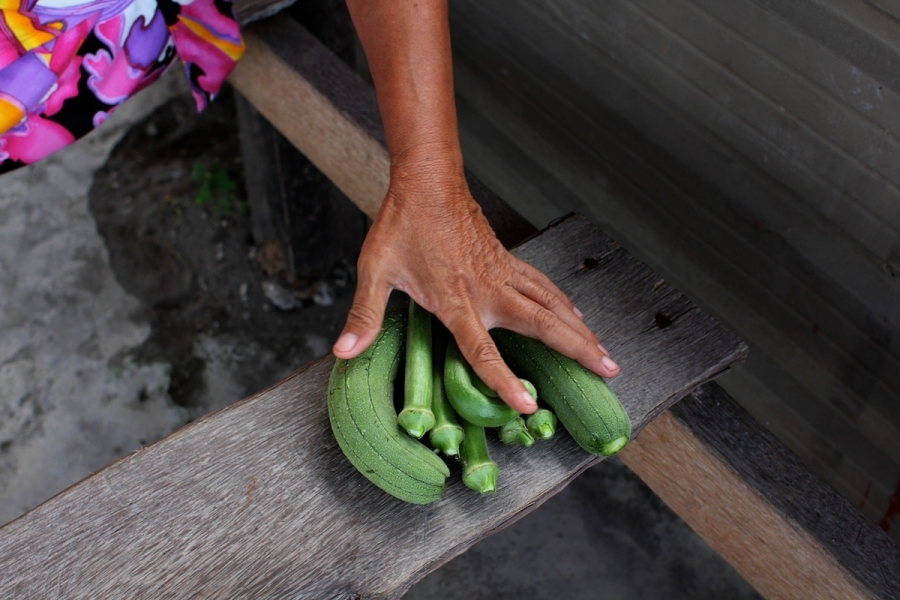 Blanca Manyon holds some freshly picked okra and patola (luffa squash). The vegetable garden is tended by, and shared between, fifteen families in Sandy Beach.

Next to the garden is Clariza’s makeshift home. It still has a roof made from a UN tarp; otherwise it's mostly built form debris. A small plastic radio hangs from a rafter in the middle of the room.

"Even if there’s just a little rain, I turn on the radio right away so I can listen to the news to see if there’s a low pressure system, or if there’s a typhoon coming," Clariza says. "So our radio means so much to us."

Batteries are too expensive and there's no electricity, so the radio is ingeniously powered: Clariza's husband spliced in a USB cord, and they charge it on the solar lamp donated by the UN. One UN official told me it’s that kind of resilience that’s helped the recovery happen faster than expected —  and the fact that people here are used to living with very little.

Clariza and her neighbors are adapting to their new lives with laughter and ingenuity. But they can’t forget how vulnerable they still are. Life at Sandy Beach was completely upturned by Typhoon Haiyan. And Clariza is afraid that as this year’s rainy season ramps up, another big typhoon could hit.

Just behind her house is the ocean. "The sea still looks the same, like nothing happened," she says. "Only everything around it changed." 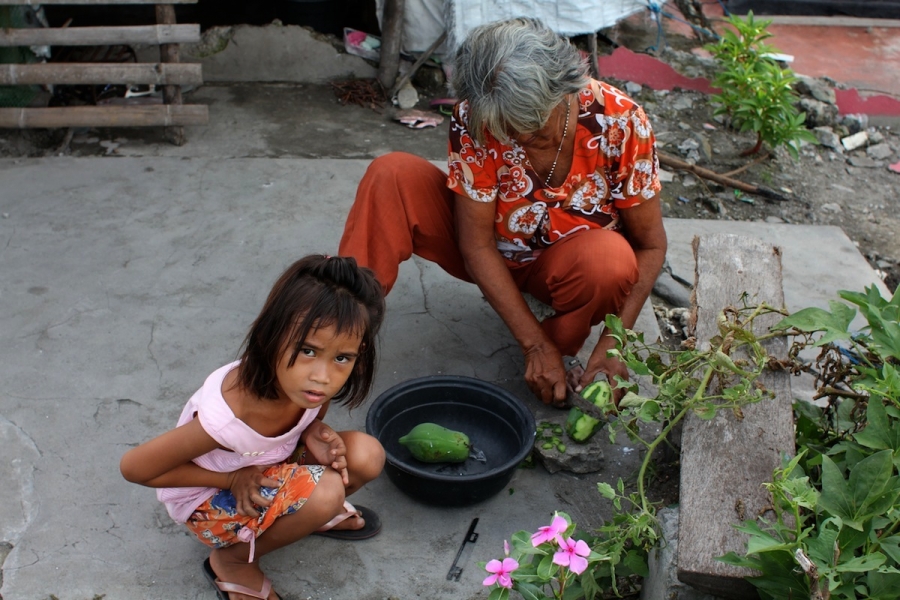 A woman peels a green papaya, which now grow wild in Sandy Beach. Before Typhoon Haiyan, the neighborhood was too densely-packed with concrete homes for plants to grow, but now that all the homes have been crushed and most plots abandoned, papaya and banana trees grow throughout the area.