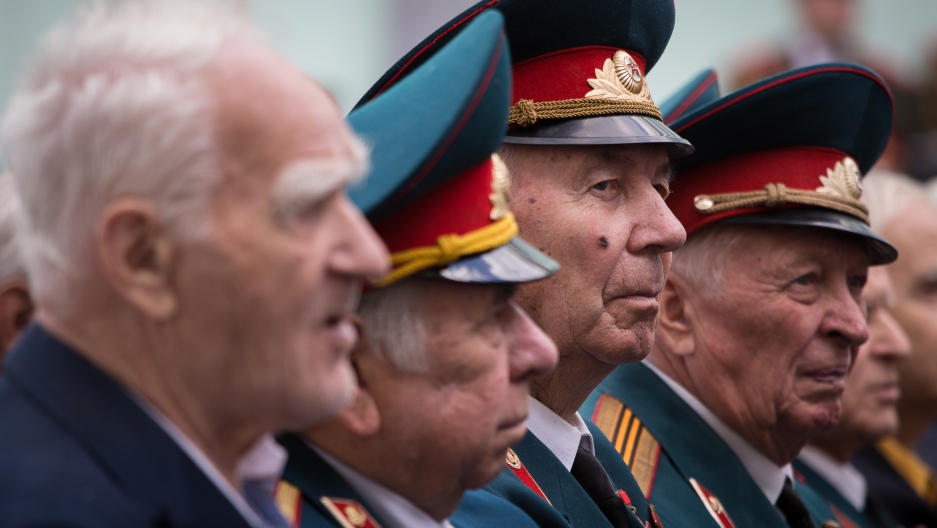 TOMSK, Russia — As the director of this country’s oldest museum of political repression, Vasiliy Khanevich spends his days inside a musty Siberian basement some 2,000 miles east of Moscow, surrounded by photographs of the dead.

His salary is modest and the state-owned museum he runs, located in the cramped detention center of a former state security building, makes no money.

But none of that bothers him.

What upsets stocky, mustachioed Khanevich is that the rest of Russia is caught in a patriotic frenzy glorifying the Soviet Union’s heroic achievements.

“People forget a lot of details about the ‘bright Soviet past,’” Khanevich says, “about the shortages, the poverty and many, many other things.”

With Russia locked in a geopolitical standoff with the West over Ukraine, the Kremlin is selectively deploying historical memory in a bid to bolster support for President Vladimir Putin and his policies.

That often means glossing over its most painful moments, such as the terror that flourished under Soviet dictator Josef Stalin.

Instead it’s resurrecting a Soviet-style narrative with the help of state-run media, casting Russia as a righteous bulwark against Western influence. The overarching theme is always “victory.”

Officials and other government supporters here have drawn increasingly absurd parallels between the seizure of eastern Ukraine by Russian-backed gunmen and the Soviet Union’s defeat of Nazi Germany — by far the most pivotal moment in that country’s history.

Critical examination of the Soviet past is rarely an option, and Putin himself typically sets the tone.
In a meeting with historians on Wednesday, he dismissed Western criticism of the 1939 non-aggression agreement between the Soviets and Nazi Germany, the Molotov-Ribbentrop pact that paved the way for Soviet Union’s forcible occupation of the Baltic states and half of Poland.

“They say: ‘Oh, how bad,’” Putin told the audience. “But what’s so wrong here if the Soviet Union did not want to fight?”

He points to Stalin’s Great Terror of 1937-38, when more than a million were killed or imprisoned, saying many are reluctant to pin blame on the Soviet system at large.

“On one hand, they understand the Terror happened, and that it was bad,” Roginsky says. “But on the other, they say, ‘Our government was always decent.’”

“So who is to blame?” he adds. “A crime took place, but there’s no perpetrator.”

The absence explains why Stalin remains one of the most popular historical figures for Russians, credited for defeating the Nazis and industrializing the Soviet Union.

A recent poll by the official Public Opinion Foundation found that 89 percent of Russians discuss their country’s history of repression only rarely or not at all. Meanwhile, a third of the population believes the media discuss the topic “too much.”

Even more ominously, the same poll also found that 48 percent expect a return of Soviet-style repression.

And it’s not just public opinion: Veteran dissidents see signs of what they say are familiar Soviet tactics making a comeback.

Critics have accused the authorities of staging politically charged show trials against protesters and even ordering alleged perpetrators to mental hospitals.

Sergei Grigoryants, an activist who spent nearly a decade in Soviet prisons, says the Kremlin’s current critics are met with a wave of “total intimidation” that may only worsen.

“Unfortunately, I’m afraid that the forms [of intimidation] used today will be deemed insufficient by the authorities pretty soon,” he told Radio Liberty late last month.

Some of that pressure is being exerted on those encouraging Russians to dig deeper into their history.

The most prominent example is an official campaign against Roginsky’s Memorial, the country’s oldest civil rights group and the lone symbol of Russia’s flagging effort to deal with its past.

The group is has gotten used to official harassment.

In recent years, it’s been hit with allegations of treachery and collusion with foreign powers seeking to foment unrest here — familiar accusations for Putin’s critics.

But now Memorial faces a Supreme Court hearing next week that could strip the organization of its legal status. It comes after Russia’s Justice Ministry asked the court last month to “liquidate” Memorial.

Roginsky says the move would unleash a bureaucratic nightmare on his organization, which maintains a vast network of regional groups, but that it would not stop their activity.

“The [regional] organizations will reregister, and we’ll keep thinking about how to reunite again,” he says.

The campaign is especially painful for veteran activists like Khanevich, who runs the Tomsk chapter of Memorial and has spent more than two decades uncovering Soviet crimes.

For him and other locals here in Siberia, the issue of historical memory hits home particularly hard: virtually everyone was affected in one way or another by the regime’s penchant for mass executions, arbitrary detentions, and forced exile.

More from GlobalPost: The EU promises to slash carbon emissions

In the Tomsk region alone, at least half a million people fell victim to Soviet repression. That number includes only those who were officially rehabilitated, Khanevich says.

From the four-chamber prison that now houses his museum, around 11,000 people were sent to their deaths in front of firing squads on Stalin’s orders.

That’s partly why he believes politics shouldn’t be involved in addressing historical memory.

“The time has come to drop the political insinuations regarding this question and simply think about the millions of people who were lost,” he says.

“No matter what you think of this part of history,” he adds, “it’s impossible to hush it up.”