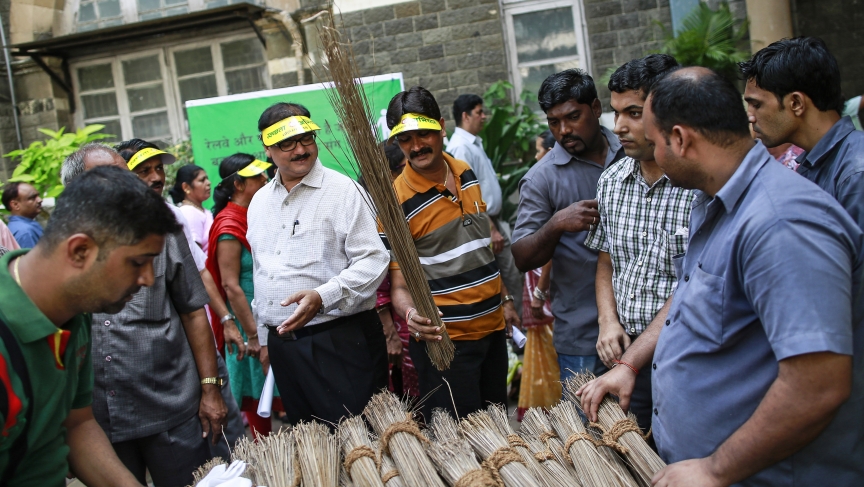 India's new Prime Minister Narendra Modi challenged his fellow politicians as well as celebrities to help him clean up the country.

Local politicians have dutifully towed the line, being pictured across the country with brooms in hand, sweeping up trash on city streets and sidewalks. Turns out, however, that in at least one instance the trash had been dumped onto the sidewalk by government workers so it would be there for the politician to sweep up. Oops.

According to the Times of India, the BJP party chief in Delhi, Satish Upadhyay, who was caught sweeping up just-dumped garbage, insists that the organizers of his visit to the India Islamic Cultural Centre were to blame. Modi is the leader of the BJP party. A BJP official said Upadhyay was a guest and not responsible for the organization choosing to dump trash on the streets for him to clean up.

Katie Mulrennan has been teaching English for three years, from Spain to the Middle East to South Korea. But when the Irish woman applied for another job in South Korea recently, she was stunned at the reply she got. An email from an agency she applied to said: "I am sorry to inform you that my client does not hire Irish people due to the alcoholism nature of your kind." Mulrennan says she was furious, but ultimately decided that sending an angry response would get her nowhere.

She told the BBC that she sent off a sarcastic reply, reported the posting to Craigslist, where she found the listing, and moved on to other applications. The 26-year-old eventually found a job and thought nothing of the reply, until a friend convinced her to post about it. It went viral, and all of the sudden media from around the world were reporting her story. Still, she wants to make clear that she's holding no hard feelings toward South Koreans in general, saying she loves being in Seoul.

Jackie Stenson and Diana Jue knew they wanted to help the poor people of the world, but as they researched how to do it, they realized that the world's businesses were having more success getting their products into wide, global use than charities that were giving their products away. So when they set out to create Essmart, they decided to establish a for-profit business, rather than a charity.

In the latest installment of the Tracking Charity project from PRI's The World, the two women talk about their big project: A solar lamp that retails for about $25 in a select part of India. One retailer who sells the product in his small shop considers the product a success — even using it in his shop to stay open later. The American women say people who spend their own, hard-earned money on products are more likely to use the products and demand products that will be useful to them.

Ever since Osama bin Laden was killed in May 2011, Americans have wondered who was the US commando who pulled the trigger. It had been a closely guarded secret, but in recent weeks, details have started to leak out about not just the man who pulled the trigger. Now Vanity Fair has collected the various pieces of information and introduces us to Rob O'Neill — the man who reportedly will go on Fox News next week to discuss his role as the individual who finally killed America's most wanted terrorist.

O'Neill's father, Tom, has already confirmed his son was the one who killed the al-Qaeda leader. But many fellow SEALs and other special operations operatives are concerned by O'Neill going public — saying he's violating the SEAL code. Government officials, for their part, have withheld comment on O'Neill, but have threatened to prosecute anyone who violates government rules on secrecy.

President Barack Obama can't run for re-election, so this week's Congressional elections are the last ones that will take place while he's in the White House. It also serves to unofficially launch the 2016 campaign to see who will replace him. And with his own party being rebuked so firmly by voters across the nation, many foreign audiences see Tuesday as a turning point for Obama — a beginning of the end for him.

PRI's The Takeaway looked at some of the reactions, as well as how Obama's foreign policy initiatives, specifically his effort to win a deal with Iran over its nuclear program, may be weakened by Republicans' victory at the polls. Not everyone is giving up entirely — many in Europe still hope for a trade deal, for example — but hopes are dimming as Obama's final two years in the White House begin to tick down.

Rome is bracing for "water bombs" after violent storms brought hail and flooding to the Italian capital. It forced officials to close city subway stations for a time, and some flights were diverted as well. According to Gazetta del Sud, more storms were expected.