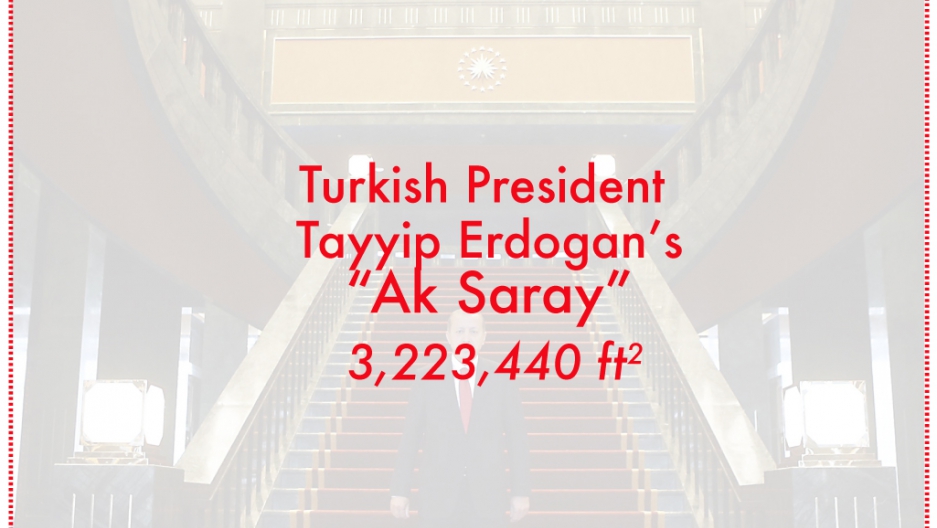 What do you do with a palace 58 times the size of the White House? Turkey's president is about to find out.

Opposition leaders aren't pleased. Umut Oran, deputy for the opposing Republican People's Party, noted that Turkey could have sent three satellites to Mars with the money it spent on the palace. And if Erdogan had been feeling more generous, he could have used the $615 million to help fight some of today's biggest human tragedies, like Ebola and the Syrian refugee crisis.

More from GlobalPost: Turkey's Erdogan just moved into the world's most expensive palace. Here's what $615 million could have bought instead

So just how massive is Erdogan's new place? We've compared it to some well-known landmarks to help you understand.

Home office of arguably the most powerful head of state in the world, the White House is so big that you'd need 300 gallons of white paint to slap a new coat on the exterior of the residential wing, which doesn't even include the East and West Wings. Still, the White House doesn't even come close to the Ak Saray, which has more than 58 times the square footage.

The Kremlin is one of Russia's most iconic structures and home to the country's government. The name translates to "fortress inside a city" and its palaces and cathedrals are enclosed by a wall that has 29 towers and five gates. The massive complex still can't compare to Erdogan's new digs.

The Palace of Versailles:

Even Marie Antoinette can't touch Erdogan, it seems. The Palace of Versailles, which Louis XIV made France's seat of power 1628, was, for a long time, the grandest palace in the world. The gardens alone feature 200,000 trees, 210,000 flowers planted annually, 50 fountains, and 650 water jets. Despite its size, Versailles would fit comfortably inside Ak Saray.

If French monarchs can't compete, how about the Brits? Buckingham palace is pretty huge. It's home to the largest private garden in London, complete with a lake, tennis courts, and a helicopter landing area. It has 775 rooms, including 19 State rooms, 52 Royal and guest bedrooms, 188 staff bedrooms, 92 offices, and 78 bathrooms. Let's see how it stacks up to Erdogan's pad. Not so well, it turns out.

If Erdogan can't be outdone by France's most decadent monarchs, or by the Queen of England, can he roll with Chinese emperors? Yep. The ancient Forbidden City Complex, by far the biggest imperial palace in China, is also no match for Erdogan's new home. Located in the heart of Beijing and over 600 years old, the complex was home to emperors from the Ming and Qing dynasties. Today, it's China's largest and most intact ancient structure, with a Palace Museum featuring over 1.8 million pieces in its collection.

Up until a month ago, the Louvre was the biggest palace in the world. The entire complex contains the old Louvre, the new Louvre, and everything in between (basically, everything you saw in the first half of the Da Vinci code). It's so big that it needs 2,000 staff members to look after the 70,000 pieces of art displayed around the museum. According to Lonely Planet, it would take nine months to see every piece of art in the museum. Nine months.