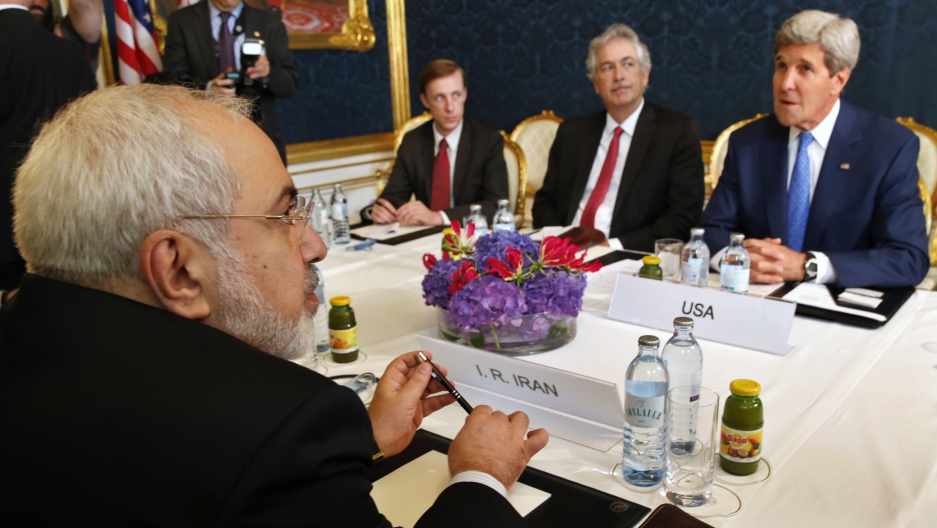 Iran's Foreign Minister Javad Zarif, left, holds a bilateral meeting with US Secretary of State John Kerry on the second day of talks over Tehran's nuclear program in Vienna, July 14, 2014.

In less than three weeks, Iran and the US have to reach an agreement on the future of Iran's nuclear program.

But both the leaders of Iran and the US face major challenges at home. On the US side, the GOP victory in Tuesday's mid-term election may be a complication.

“The Republicans have long been much more difficult and demanding when it comes to the terms of a nuclear deal with Iran,” Wright says. “They’ve been skeptical about whether Iran will meet terms ensuring that it is not capable of converting a peaceful energy program into the world’s deadliest weapon.”

The Senate would need to ratify any formal treaty, but the Obama administration is considering about using its executive authority to ease some sanctions, should agreement be reached.

Wright predicts “it will be high drama.”

But Iranian President Hasan Rouhani has had his own difficulties selling a deal with the Americans to hardliners in Tehran.

But political challenges aside, there are other things that can make those talks more complicated: Americans and Iranians each have their own set of unwritten rules for communication.

In Iran, there's the complicated tradition of "tarof."

"Instead of being very direct, like American culture, we do this kind of dance," says Leyla Shams, an architect who has a podcast that teaches Persian culture. The keyword here is dance. Tarof is a verbal dance.

"Lots of times you'd go to someone's house and they'll ask you: 'do you want tea?,'" says Shams. "And at first you always say 'no, no, thank you, don't go through the trouble, don't worry about it.' And of course, the host knows that you do want tea and they'll bring it for you any way. And up to the moment that that tea goes up to your lips to drink, you have to insist that you don't want tea."

Here's what tarof boils down to: Pretend you don't want something when you really do. Offer something when you don't really plan to give it away, or say nice things you don't mean. The most bizarre thing about tarof is that while it's confusing, time-consuming and inefficient, Iranians do it as a sign of respect.

Growing up with the culture and being bombarded with tarof, Iranians learn this verbal dance quickly. Generally, they know when someone is being genuine or just doing the tarof. But it can be very disorienting for non-Iranians.

John Limbert, former deputy assistant secretary of state for Iran and a veteran US diplomat, knows this from experience.

In 1979, he was an official at the American embassy in Tehran. Limbert stepped on Iranian soil only weeks before the Shah was over-thrown.

He recalls that during his early days in Iran, he noticed that when people gave each other gifts, they mentioned that it was worthless or insignificant, as a sign of tarof.

So he gave it a try.

"I can remember once being in a ceremony and we wanted to thank some teachers who had helped us with a program and we had bought them a very nice, framed picture of the Shah for their office and I made the statement that this was an insignificant gift," he recalls.

Seeing the faces of the people around him, Limbert knew he had misused this particular bit of tarof.

Not long after that, in November 1979, Iranian students took over the American embassy in Tehran and took Limbert and 51 of his colleagues hostage. They were held captive for 444 days. As the days went on, Limbert says, he used tarof as a weapon.

"If someone came into the cell where I was, I would say, please, you must come in, you must sit down, and he'd say, oh no, no, I could never do that. I said, no you must ... I would offer them fruits and nuts," he says.

Limbert, who speaks Farsi fluently, even used tarof sarcastically in a meeting with the man who later became Iran's Supreme Leader.

"You Iranians are so hospitable," he said, "that once you have a guest, you won't let them leave."

The exchange was captured on camera and later aired on national TV. Khamenei was taken aback by Limbert's tarof, but brushed it off.

Now 35 years later, the two countries are negotiating over Iran's nuclear program. And because the two sides have had only limited contact over such a long period, every little gesture counts.

Because the diplomats on the Iranian team have lived in the US and because the negotiations are in English, he says, there's probably little chance that tarof would make or break a deal. Americans are known for being direct — but Limbert says it won't hurt for them to at least know about tarof.

It might improve the human interaction between the negotiators and maybe even smooth the way for a final agreement.