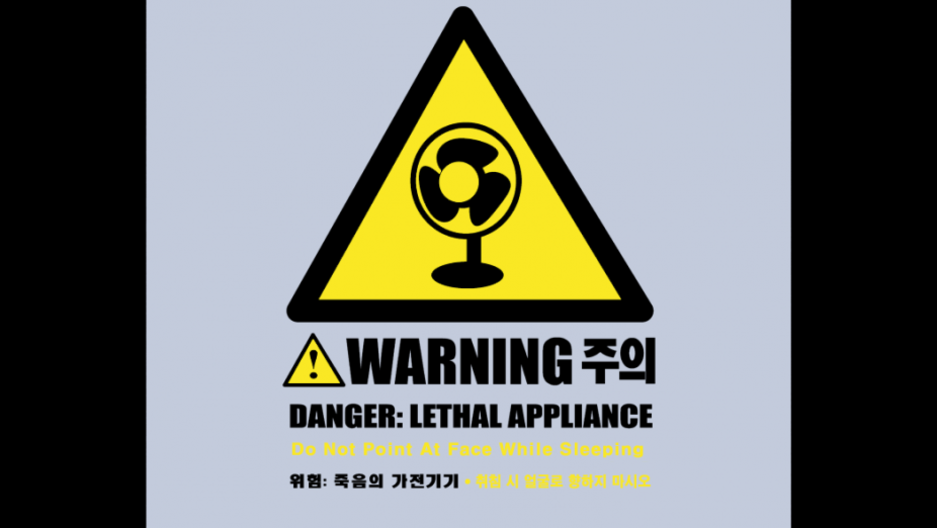 Fan death theories are so ubiquitous, they've turned up as logos on t-shirts- like this one from a t-shirt company specializing in Korean humor.

Koreans often believe you can die if you sleep with a fan on all night. It’s a phenomenon called “fan death” and virtually all Korean kids have heard their parents say, “Don’t leave your fan on all night."

My parents told me the same thing.

Growing up in California’s San Gabriel Valley in the sweltering dry heat, all I wanted to do was sleep with a fan on. My parents never let me. I used to think it was a thing everyone told their kids, but when I’d bring it up with other people, they’d give me a look of total confusion.

It turns out it’s a very special superstition among Koreans. It’s so ubiquitous that electric fans made in Korea have timers on them. Korean news outlets even report fan death incidents that are totally unconfirmed.

A number of websites espouse theories about the origins of fan death. One way Koreans believe your fan can kill you is hypothermia. As the theory goes, if there’s a fan blowing all night, it may cause your body temperature to cool down enough to cause death.

They also worry about suffocation: that a fan left on in a sealed room just circulates the heat and prevents proper breathing. There’s even a theory that the South Korean government concocted the idea fan death to persuade citizens to decrease electrical use during an energy crisis in the '70s. Of course, there's no evidence to support any of these theories.

When I call up my mom in Los Angeles to ask her about fan death, she still thinks it’s an issue. She’s sold on the hypothermia theory. “It could make sense,” she tells me, laughing.

She says even in the summer, the air chills at night. So it’s possible for your body temperature to dip enough to die. It’s not exactly science, she says, but because everyone says it, she believes it too.

When I remind her how torturous it used to be in the summer, she says she’d still make the same decision. “What if my kid dies?” she asks.

So ask a Korean, any Korean that you meet. Chances are, they will tell you to never sleep with your fan on.

Let's be fair: Korean parents aren't the only ones with superstitions. We've all heard things from our parents that turned out not to be true. What about you?  What's your family superstition, and where do you think it came from? Let us know in the comments.