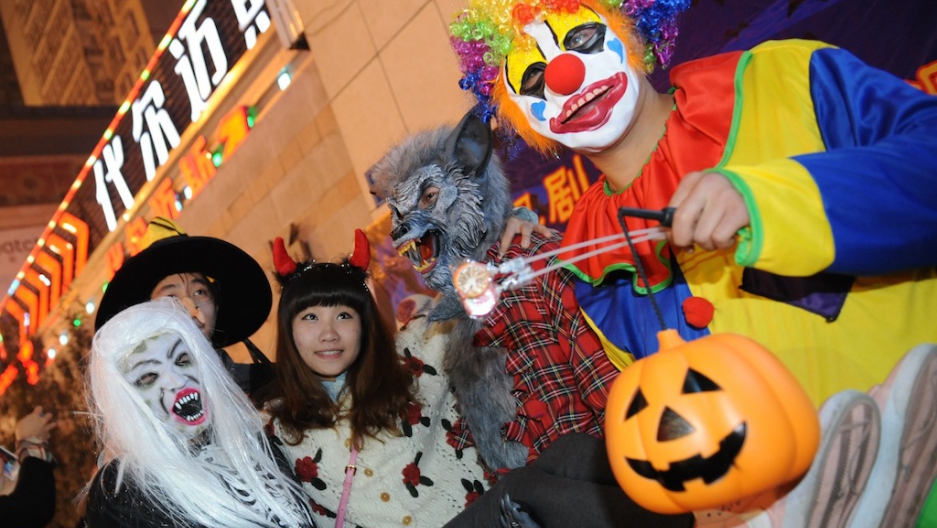 Revelers celebrate Halloween in Taiyuan, China last year. This year, police put a damper on the evening by warning against weird and scary outfits in the subway.
Credit: ChinaPhotoPress
Share

BEIJING, China — Subways can be hellish even on a normal day. But here in Beijing on Friday, officials were particularly concerned about ghosts in the machine.

A notice, posted at midday Halloween on a police micro-blog, stated that anyone “wearing [weird] clothes or scary makeup” would be refused entrance to Beijing’s crowded underground transit.

“If the chaos seriously affects safety, police will deal with it severely,” it warned.

On Halloween, the subway is to Beijing what Christopher Street is to New York City.  For the past four years, an annual Halloween subway ride has been (loosely) organized by foreign residents.

As the police message got around, some revelers found it to be confusing.

“The wording is quite vague: ‘weird costumes.’ How should that be defined?” asked Beijing lawyer Li Heping. “It’s too broad a concept.”

Party officials have not always been so anti-Halloween. This year, it turns out, is different. The Asia-Pacific Economic Cooperation forum — a meeting of economic leaders from around the region — will take place this week in Beijing.

That’s inspired a series of increasingly strict measures, designed to “publicize the capital’s and the country’s positive image.” Factories have been shuttered and schools closed ahead of the summit.

But the trickle-down effect has also resulted in official over-reach — and in response, satire. “Is Beijing really afraid of Halloween?” one expat joked as thousands of Chinese thronged the city’s dense nightlife area on Friday, many in costume despite the warnings.

Things become somewhat tense whenever an international “flash mob” type event emerges. At other times, large numbers of Santas have been known to gather in Tiananmen Square. Authorities are often baffled, but they usually relent.

The run-up to the APEC summit is “a political task that overrides everything in the city,” according to city officials. That oversight has run from the authoritarian to the faintly absurd.

All state employees have been given five days off, with travel agents offering cut-price getaways. Meanwhile, no visas or marriage certificates are being issued. Overseas journalists have found mundane activities monitored, and identity papers checked. “Wrong time, wrong place,” one security agent told a team detained filming a routine land-grab.

One main issue for the city is the terminally toxic air. Prior to 2008, most of Beijing’s coal-polluting factories were relocated to nearby Hebei province. The solution worked for that year’s Olympics but now the smog has returned — more implacably than ever.

To ensure blue skies for foreign eyes, thousands of factories in nearby Hebei are being temporarily shuttered, at considerable economic loss.

And for reasons unexplained, a planned “Zombie Walk” between four bars was also abruptly nixed ahead of time.

Meanwhile, it turns out not everyone got the anti-Halloween memo. China’s state channel, CCTV, published a Buzzfeed-style list of “10 Chinese-themed Halloween costumes to impress your friends.” The looks include Dowager Empress Cixi, a PLA general, "fuerdai" (rich kid), and the jailed socialite Guo Meimei. “Get into the spirit with these super-fab ideas,” the post enthuses. “You’ll be totally niubi!” That word means "f*cking cool."