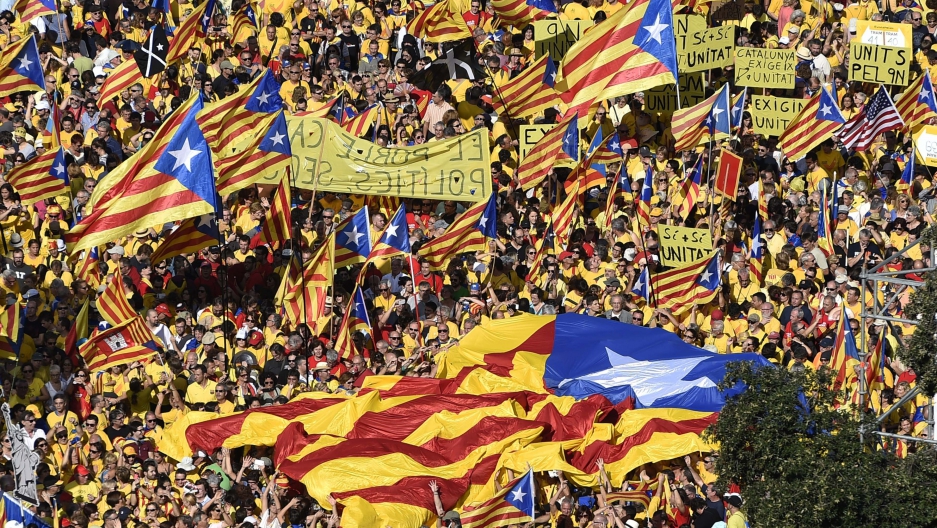 Pro-independence Catalans in Barcelona. Activists in France and elsewhere are hoping for a revival of Catalan consciousness on their sides of the border as well.
Credit: Lluis Gene
Share

CERET, France — It's a picture-postcard scene of rural France.

A fountain trickles in a sun-dappled square surrounded by pastel-painted houses. Shaded by plane trees, customers at the little bistro peruse Le Figaro while a waitress — who looks like she should be modeling for Dior — brings their plats du jour with a carafe of local rosé.

"When I grew up there, everyone spoke Catalan," says Miquel Arnaudies. "I'm part of a generation where Catalan was dominant, now it's dying out."

Ceret is located in mainland France's southernmost region, the Pyrenees-Orientales, or as Arnaudies prefers to call it: Northern Catalonia.

"The Spanish were never able to assimilate the Catalans, but the French have done it very effectively," complains the 71-year-old artist, writer and defender of Catalan identity.

With Spain's Catalonia region preparing to vote on independence on Sunday, activists in France are hoping for a revival of Catalan consciousness on their side of the border as well.

"It will have an impact up here," says Arnaudies, president of the local Catalan Cultural Center. "It will create a new awareness of Catalan identity."

Northern Catalonia — a triangle of land that runs from the Mediterranean coast through fertile vineyards to the high mountains of the Pyrenees — was handed to France in 1659. A treaty ending a Franco-Spanish war split this Rhode Island-sized territory from the rest of Catalonia, which remained under Spanish rule.

For many Catalan nationalists, the Pyrenees-Orientales form part of their historic homeland — the Paisos Catalans, or Catalan Lands — along with several other territories outside the current Spanish region of Catalonia. They include the Valencia region to the south, the Balearic Islands — including the vacation hotspots of Mallorca and Ibiza — a strip of land in Spain's Aragon region, and the tiny but already independent Catalan-speaking country of Andorra.

Although Sunday’s vote will be limited to the Spanish Autonomous Region of Catalonia — and has been stripped of any legally binding status by Spain's constitutional court — it is being closely watched in other Catalan-speaking areas.

While Arnaudies sees an opportunity, others are concerned.

Valencia and the Balearic Islands are strongholds of the conservative Popular Party of Spanish Prime Minister Mariano Rajoy, which is fiercely opposed to Catalan independence. The regional authorities there are wary of Catalonia's intentions.

"Valencia's affairs are of no concern to Catalonia," said Emilio Argueso, Valencia delegate of Citizens, a political party opposed to Catalan independence.

"The people of Valencia feel very Spanish," he added in a telephone interview. "We don't recognize the concept of Catalan Lands. We don't want independence and much less to be part of something else."

A coalition of pro-Catalan parties won five of the 59 seats in the last elections to the Balearic Island parliament, but support for "greater Catalonia" is marginal in Valencia or southern France.

"I'm in favor of re-unification, but that is a minority view," Arnaudies acknowledges during an interview at the Catalan cultural center in Perpignan, capital city of the Pyrenees-Orientales.

"It's our job to try to raise awareness,” he adds. “We're a forgotten corner of France, but we could be an important part of an independent Catalonia."

Several posters dotted around Perpignan proclaim "Northern Catalonia is also Catalonia" and offer the prospect of a "renaissance with Catalonia," but it's hard to find much enthusiasm on the streets for the idea joining with an emergent new state to the south.

"It's good that Catalan culture is strong here, but I like unity, not division," says Gilles Rochefort, selling escargots a la Catalane (snails in red pepper and tomato sauce) in the market filling Perpignan's Place de la Republique. "It's a pity that people want independence, we should all be working hand-in-hand, not against each other."

Catalans are now a minority in the Pyrenees-Orientales. Only around a quarter of the region’s 450,000 population speak the Catalan language.

Pere Manzanares, who runs a Catalan radio station in Perpignan, says the prospect of Catalonia becoming independent won't have a major political impact.

"It could boost Catalan culture here and demand for Catalan-language teaching, but won't lead to any radical change in people's lives," says Manzanares, the son of Catalan refugees who fled to France in 1939 after the Spanish Civil War.

"I'm a bit worried that there could also be a negative impact," he adds. "Some French people could perceive a political threat that really isn't there, and that could lead to a backlash."

More from GlobalPost: Are Germans really obsessed with austerity?

Artur Mas, the nationalist leader of the Catalan regional government in Barcelona, has given assurances there are no expansionist designs behind his independence drive.

However, a rival separatist party that’s currently topping public opinion polls in Catalonia is explicit about including the wider Catalan-speaking lands in its program.

"The Catalan Republican Left will work to build a social majority favorable toward independence for the Catalan Lands," the party's website says. "The objective is to obtain independence for Catalonia in 2014 and contribute eventually to the complete liberation of the nation."