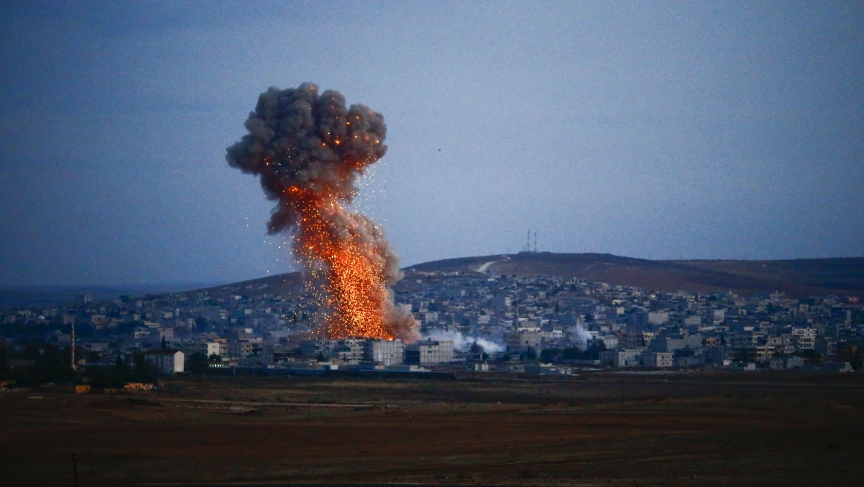 Smoke rises over Syrian town of Kobani after an airstrike, as seen from the Mursitpinar border crossing on the Turkish-Syrian border in the southeastern town of Suruc in Sanliurfa province, October 18, 2014.
Credit: Kai Pfaffenbach/Reuters
Share

A new United Nations report says more foreign jihadi fighters are traveling to Iraq and Syria than ever before.

The report, which was obtained Thursday by The Guardian newspaper, was submitted to the UN Security Council by a panel of experts who monitor al-Qaeda and the Taliban.

"Numbers since 2010 are now many times the size of the cumulative numbers of foreign terrorist fighters between 1990 and 2010 — and are growing,” the report says, finding that "15,000 people have travelled to Syria and Iraq to fight alongside the Islamic State (ISIS) and similar extremist groups.”

Spencer Ackerman, the national security editor for The Guardian's US edition says what’s surprising is "the fact that not only is the conflict in Iraq and Syria attracting an astonishing number of foreign terrorist recruits, but the fact that some of them are coming from so many diverse places.”

The panel says fighters from more than 80 countries are working with al-Qaeda associates in Syria and Iraq and "form the core of a new diaspora that may seed the threat for years to come."

The UN’s numbers match up with recent estimates from US intelligence about the scope of the foreign fighter problem. And the report also points to a strong upsurge in foreign fighters working for ISIS, but not al-Qaeda.

“It seems like al-Qaeda is on a bit of a downward trajectory,” Ackerman says. “[Al-Qaeda] is viewed among foreign terrorist fighters as being less sort of 'native' in terms of speaking their own language — meaning the language of young people on the internet. ... Basically al-Qaeda looks washed. And ISIS looks vibrant by contrast.”