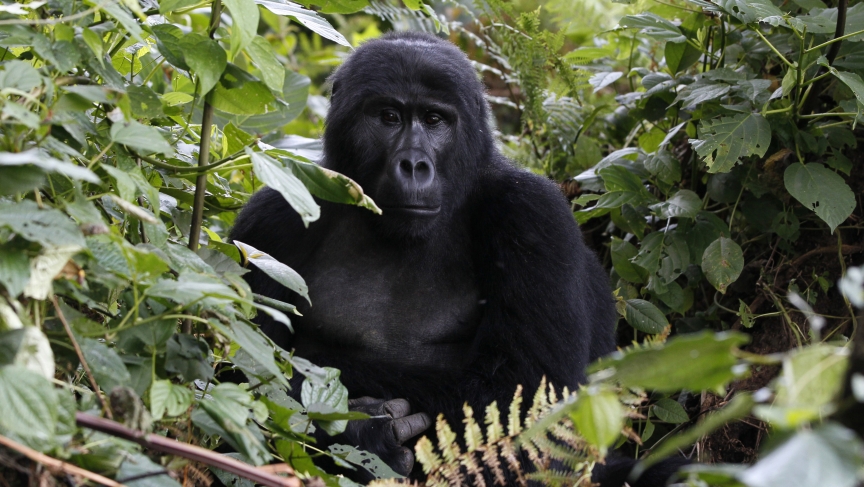 An endangered mountain gorilla rests inside a forest in a Bwindi Impenetrable National Park in Rwanada.

Throughout the course of the current Ebola epidemic, there has been a lot of misinformation circulated — for instance, how the disease is born and spread.

But as is the case with most diseases like Ebola, there is a definitive ecological and biological start to the virus. The task that’s left for scientists is to determine what that starting point was.

That’s why science writer David Quammen travelled deep in the forests of central Africa. His investigations are now the subject of his latest book, “Ebola: The Natural and Human History of a Deadly Virus.”

“The purpose is not so much to solve this outbreak, this epidemic, or come up with a vaccine, but to be able to prevent the next one,” he says.

With the Ebola virus, few things are known to be absolutely true. For instance, we know that the disease can be spread through certain animal hosts.

Quammen witnessed this firsthand during his time in central Africa two years ago — during the last Ebola outbreak. He and his team spent 10 days in a forest known to be a gorilla habitat, but encountered none.

Earlier, however, locals had found a pile of 13 dead gorillas. It appeared as if the virus had swept through the forest as well as the village, killing both gorillas and humans alike.

“We learned from that that Ebola can come through these immediate hosts — chimps or gorillas,” he explains.

But what remains to be known about the virus is which animals harbor it permanently and asymptomatically. These are called “reservoir hosts” and are crucial in the fight to contain Ebola.

“[Gorillas and chimps] can’t be reservoir hosts because it kills them too quickly,” Quammen says. “They’re as susceptible to it as we are. So there has to be some other creature in which the virus hides for years at a time between these dramatic spill overs, and we’re still trying to find out what that creature is.”

During this most recent outbreak, it was widely thought that fruit bats could be that creature. But Quammen remains weary of these claims, saying that there isn’t sufficient evidence to be positive that the animal is the reservoir host.

For instance, a specific breed of fruit bat — the Hammerhead bat — has been shown to carry antibodies to Ebola, meaning it has been exposed to the virus.

“But that doesn’t necessarily mean that the virus lives in it, thrives in it, replicates abundantly in it, and then spills over into other creatures,” he explains.

Quammen says there are two possible options when it comes to dealing with the major issue of reservoir hosts — either to cure the host completely, or prevent humans from coming in contact with that specific animal. But, he says, the former is nearly impossible.

These preventative measures could have been used to prevent the spread of another deadly virus — AIDS. A precursor virus spread during a single chimp to human interaction that can be traced back to as early as 1908.

Epidemiologists agree that human intervention in natural environments is often the catalyst for viruses to spread from animals to villages.

“We know that all the species of animals, plants, fungi and bacteria in these dense and diverse tropical ecosystems carry viruses. They may carry as many as 10 unique viruses — each species,” Quammen says. “And this is where new viruses come from. This is where new emerging diseases emerge from.”

The transfer occurs when humans kill, eat and ship wildlife for food, cut down trees, create mining camps or settle villages. During these disruptions of ecosystems, the viruses are given the opportunity to spread from the reservoir hosts to humans. 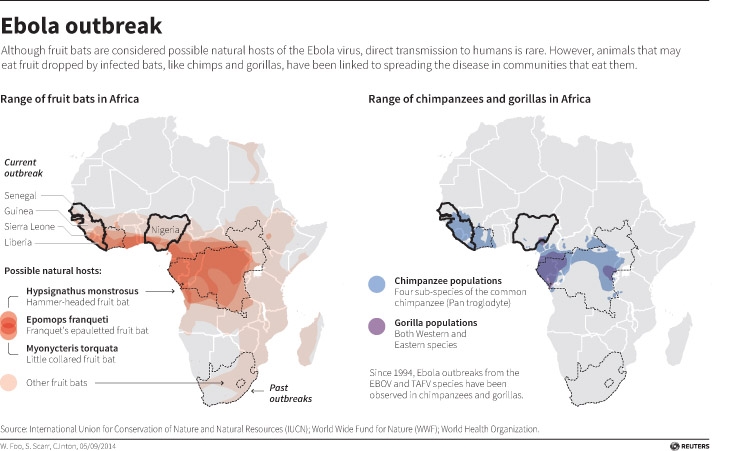 Map showing the range of fruit bats, chimps, and gorillas in Africa, all linked to spreading the Ebola virus in communities that eat them.

While this is important research, there’s only a small group of scientists doing the legwork — most of whom have been looking for the host for years.

Quammen says that comes out of necessity during a time of crisis.

“Scientists hardly have the luxury to worry about the scientific origins of the epidemic when it’s so important to control it, to contain, and to stop it,” he says. “But I can tell you that work is still going on. There are a few scientists who are still out there, on the fringes of this epidemic, trying to solve the mystery of how it began, and therefore help us prevent the next one.”

Ebola: The Natural and Human History of a Deadly Virus (Norton, October 2014), by David Quammen