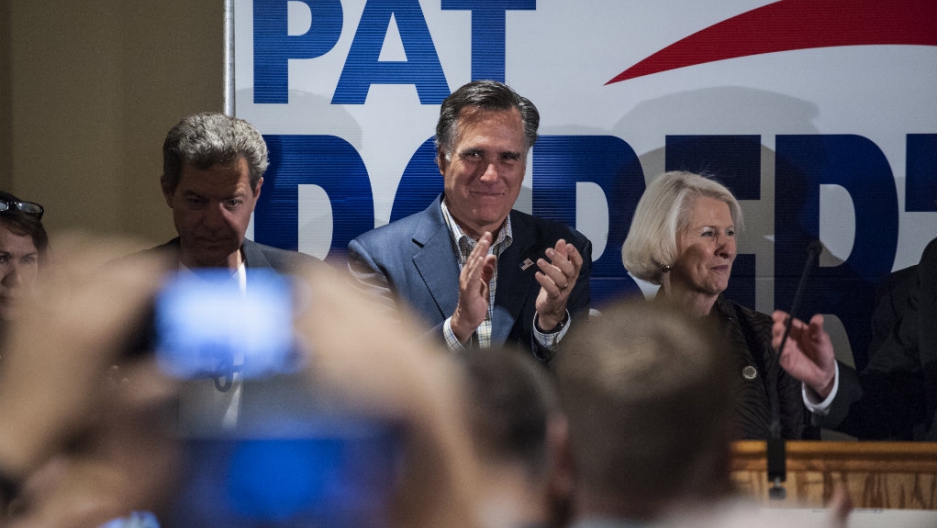 Former Massachusetts Gov. Mitt Romney and Kansas Senator Pat Roberts' wife Franki Roberts share the stage at the Prairie Fire shopping center Oct. 27, 2014 in Overland Park, Kansas. Experts say both Republicans and Democrats will need to exert extra effort in bringing the millennial vote to their side of the campaign for the midterm elections.
Credit: Julie Denesha
Share

America’s youth have become fair game in the upcoming midterm elections and beyond, according to a new national survey by the Institute of Politics (IOP) at Harvard University’s John F. Kennedy School of Government.

“In contrast to where they were four years ago, young people are very much up for grabs,” IOP polling director John Della Volpe said during a conference call Wednesday that discussed the results of the survey.

The poll found that US millennials – 18- to 29-year-olds in this case – are dissatisfied not only with both major political parties, but also with the government as a whole.

In the last few years, young people have grown both less supportive of President Barack Obama and the Democrats, and disappointed with Republican performance in Congress, according to the survey. A majority of young Americans would be content to replace all members of Congress, including their own representatives, the poll found.

“Young voters are clearly troubled with how Washington is working,” reads the poll results.

The poll, which surveyed more than 2,000 young Americans across the nation, found that more than half of those who say they will “definitely be voting” in the Nov. 4 elections intend to vote Republican – a notable shift from the 2010 survey, when 55 percent of the same cohort said they preferred Democrat control in Congress.

The president’s job approval rate among millennials has dipped to 43 percent, his second lowest since taking office, according to the survey. Hispanic support for Obama has also declined, dropping from 60 percent in April to 49 percent this fall. In 2009, the figure was at about 80 percent.

Still, Della Volpe noted that declining support among millennials for the president and his party does not necessarily translate to growing confidence for Congressional Republicans, whose approval rate is at less than 25 percent.

“This is less about young people being Republican [than being] less Democratic than they were in 2008 to 2012, the Obama years,” Della Volpe said.

In addition, when asked who they think is responsible for the political gridlock in Washington, the majority of young people in nearly every demographic – whether categorized by gender, race, party affiliation, level of education or intention of voting – placed the blame on “all of them.”

“On a wide range of issues and questions, young voters have ceased to be outliers and now look very much like the electorate at large,” according to the poll’s executive summary. “[They are] pessimistic, untrusting, lacking confidence in government.”

The poll’s results come as no surprise to Evan Feinberg, president of the nonpartisan youth advocacy group Generation Opportunity.

“We’ve known that news has been out there for a long time,” he said. In working with grassroots activists across the country, Feinberg added, “You see a lot of angst and anxiety among a generation who have never seen a country with a lot of economic opportunity.”

As of September, youth unemployment was at almost 14 percent – more than double the overall rate for adults. Student debt has also skyrocketed to an average of $33,000 per person.

These numbers – a result of both the hard-hit economy and the inability of both Republicans and Democrats to prevent young people from becoming the main casualties – are in large part behind millennials’ growing distrust for government, experts say.

“With a mountain of student debt, an unemployment rate hovering around 15 percent and an array of major institutions that don’t appear to be in tune with the problems that they face, the fact that younger Americans aren’t running out to salute the flag should come as little surprise,” Holland continued. “It’s a perfectly rational reaction to the world in which they’re coming of age.”

“After growing up under the Bush and Obama administrations, the millennials are overwhelmingly skeptical of government’s ability to do anything well,” Nick Gillespie, another author on political policy, wrote in The Daily Beast.

Politicians who want to regain the confidence of the youth must therefore empower millennials and seek their contribution and participation in upcoming campaigns, Harvard’s Della Volpe said. Ignoring the needs of this generation could result in a swing toward one party or another, he added.