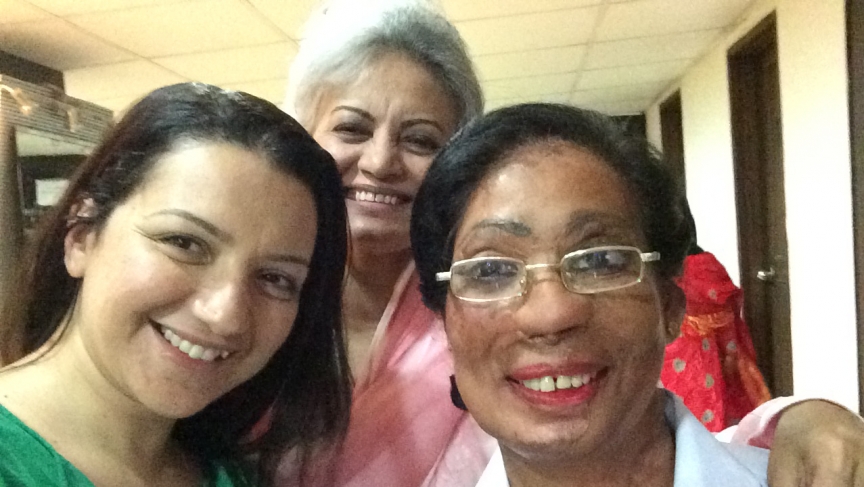 From left, BBC reporter Shaimaa Khalil, salon owner Murtasa Misbah and acid attack victim Bushra Shafi, who got medical attention for her burns thanks to Misbah and now works at her salon.

At least 160 women in Pakistan have been victims of acid attack this year. If the woman survives and is lucky, she faces surgery — perhaps many surgeries — to put her body, and often her life, back together.

The acid causes excruciating pain and disfigurement. And often the women are cast out by their family and forced to live in isolation.

The BBC's Shaimaa Khalil thought she knew the "typical" victim of an acid attack in Pakistan. "I think before I spoke to women who were victims of acid attacks, it was easy for me to generalize and assume they were from poorer backgrounds and largely uneducated," she says.

All that changed after she interviewed some victims. "One of those victims was a university professor," Khalil says. "She was on her way back from work and had acid thrown on her face and on her arms — just outside her home in a very affluent and well-to-do suburb of Lahore."

The victim herself held some of the same beliefs, Khalil says, about who could be a victim of an acid attack. "She said, 'I never thought this would happen to me. I thought this was something that happens to the lower classes. It wasn't something that happened to more educated people. But here I am, a university professor.'" Her alleged perpetrator is a doctoral student who is still at large.

It's assumed in Pakistan that men will get away with acid attacks, Khalil says: "Women are seen as easy targets. The acid itself is so easy to get." Khalil went to a couple stores in Lahore herself and asked for a bottle of acid. No problem. "For less than a dollar, you can have a liter of acid and basically destroy someone's life," she says.

Acid attacks weren't even a crime in Pakistan until 2011. But even after the law was amended, there have been few prosecutions. Khalil says even when the cases go to court, they take so long that people either gave up or settle out of court.

"There isn't really anyone or anything that's fighting for these women on a systematic level, and that's really the root of the problem," she says. "These women feel that they just don't have the support within Pakistani society."

They do have the support of Musarat Misbah. She's a makeup artist and businesswoman who runs a high-end salon in Lahore. One day 10 years ago, a woman who had been disfigured by an acid attack came to her salon.

Khalil says the woman had her whole face covered. She removed the veil from her face and Musarat told me she was so shocked, she had to sit down because she felt so numb. The woman in front of her basically had no face, as she described it: no eyes, the lips and nose melted into a lump.

"The woman asked Musarat Misbah: 'Look, you're a beautician, you've been in the beauty business for 35 years. Can you make me beautiful again? Can you fix my face, please?'" Khalil says.

Misbah called up some doctors and they came in to help. Then she went out deliberately looking for these women and put out an ad. "She said she expected two or three women but the first day, she had 42 women come through her door who were acid attack victims," Khalil says. Misbah was moved to start a charity to provide surgeries for Pakistani victims of acid attacks.

She also trains them to be beauticians. One of her trainees is Bushra Shafi, who was attacked about 15 years ago by her in-laws because they thought her dowry was too meager. Her mother-in-law held her down while her husband and father-in-law threw acid on her.

"When I was speaking to Bushra, she's such a lovely character. She was laughing all the time. She was calm and together when she was speaking about this horror story she had to live through," Khalil says. "But even though she's over it — after 150 operations — the pain is still there."

Khalil says you can see the scars and skin grafts on her face. Here eyes are skewed a little bit and she has a new nose that's not quite right. But "all in all, you can see that there is so much hope and happiness now that she is over this," Khalil says.

Khalil felt she had to ask if Bushra ever felt envious. She works in a beauty salon, after all, making people who are already good looking even better looking. "And actually she said no and said she felt quite grateful," Khalil says.

"I had so many mixed feelings when I came out of that salon. I thought I was going to go in and do this really really grim sad story of women who've been disfigured, who kind of have a job and are moving on. But really it's a sad story," Khalil says. "Actually there's so much strength in these women and so much determination to move on."

Customers at the salon told Khalil they were happy to be treated by Bushra and her other colleagues. But when she asked Misbah, the salon owner, she got a slightly different answer.

"She said some customers are quite reluctant to be treated by the beauticians who have been acid attack victims," Khalil says. "Her argument is that women come to her salon to relax, get facials and massages, be pampered — and when you're faced with an obvious acid attack victim, it takes you by surprise. It can be shocking."

So what does she says to reluctant clients? "I tell them that they have a choice to go elsewwere, but these women don't have a choice. So they stay here."