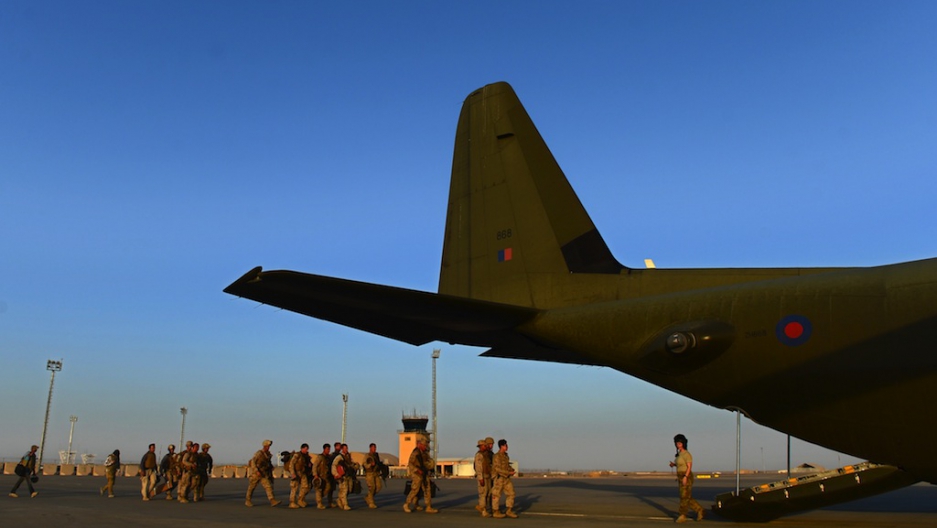 US Marines board a plane as British and American troops withdraw from the Camp Bastion-Leatherneck complex at Lashkar Gah in Afghanistan's Helmand province on Sunday.
Credit: Wakil Kohsar
Share

Editor's update: Now toward the end of 2015, the Taliban is on the verge of taking over Afghanistan's southern province of Helmand. More than a year ago, in October 2014 GlobalPost reported that the US and UK troops' pullout of Helmand left Afghan forces vulnerable to Taliban attacks, which last year were already taking a deadly toll in the province. That 2014 analysis follows:

KABUL, Afghanistan — It was not exactly an escape in the dead of night. There were no fulsome speeches, no congratulatory international attention.

The United States and British forces' pullout Sunday from Afghanistan's Helmand province was not even announced in advance, ostensibly for security reasons.

In just 20 hours, one of the largest NATO complexes in Afghanistan — with more than 40,000 soldiers at its peak — turned into a ghost town.

US and UK military officials tried to put the best possible face on it.

“Helmand has been particularly dangerous,” US Army Gen. John Campbell, commander of the US-led coalition, said at a ceremony marking the handover, according to The Wall Street Journal. “But I think Afghanistan is a much better place than it was. Each year it continues to get better.”

In reality, the handover of the US’ Camp Leatherneck and the UK’s Camp Bastion marks a major step in the winding down of the war. But looking at some of the area's biggest, persisting problems, it may also result in a highly regrettable mess.

Here are just four reasons to sit up and take notice.

Helmand is ground zero for Afghanistan’s poppy industry. The frightening findings making the rounds recently — despite a $7.6 billion counternarcotic effort, there are more opium crops than ever — largely center around Helmand. This one province, roughly the size of West Virginia, produces almost half of the country’s monstrous poppy crop, making Helmand one of the world’s largest opium producers all by itself.

Not that the US and UK were doing all that much to stop it. As the newspaper the Guardian put it:

“One of the biggest failures for the UK is that it did not stem the cultivation of poppies for heroin production. The UK was given specific responsibility for the eradication — or at least reduction — of the poppy crops and failed spectacularly.”

But with just the notoriously corrupt police and security officials to stop the flow of drugs, Helmand could have a banner year in 2015. Helmand is one of the Taliban’s major strongholds in Afghanistan, with several areas almost completely outside of government control. Sangin, one of Helmand’s most unstable districts, has seen some of the fiercest fighting of the war — including just lately, when the Taliban made significant advances.

The combined casualties of the British and US forces in Helmand are more than 850 — twice as high as in any other province, journalist David Rohde wrote for Reuters.

The Afghan troops who are supposed to be taking over have been given great billing by NATO.

“Because of the competence, resolve and combined skills of the ANSF, insurgent networks have become ineffective in Helmand province,” said a statement from the International Security Assistance Force, referring to the Afghan National Security Forces, The New York Times reported.

This, unfortunately, does not jibe well with the facts: As they square up against the Taliban, the Afghan forces are taking record casualties: 2014 was their deadliest year yet.

More from GlobalPost: Concerned Obama's war against the Islamic State is a clusterf*ck? Here's how Britain sees it

Helmandis say privately that they have limited confidence in the Afghan forces’ ability to protect them outside of the major centers, such as the capital, Lashkar Gah.

The British were a bit less Pollyannaish about the future. UK Defense Secretary Michael Fallon acknowledged mistakes were made, and added that there was “no guarantee” that Helmand would remain “stable and safe” following the withdrawal, the Independent reported.

But hey, look on the bright side, as Brigadier Rob Thomson, the senior British official in Helmand, did.

“We have not seen any evidence of ISIS in Helmand at all,” he said, referring to a widely used acronym for militants calling themselves the Islamic State, according to the Guardian.

Remember the Kajaki Dam? A major US foreign aid project, the Kajaki Dam, was supposed to tap the Helmand River to provide power to southern Afghanistan, shoring up the Afghan government’s authority and undercutting Taliban influence. No such luck. Despite massive investment — over $300 million — the dam remains unfinished, with the crucial third turbine still sitting at the bottom of a hill. There is little chance that it will be installed before the US mission ends. The Taliban has vowed to block it no matter what, and so far they have been successful.

Way back in the 1950s, Helmand was the beneficiary of US largesse as American engineers, along with their families, flocked to the desert to build a new community. Schools, hospitals, and US-style tract housing appeared, making Helmand’s capital, Lashkar Gah, into what was known as “Little America.”

It was all part of the Cold War — a means of wooing the Afghan government to the capitalist side of the conflict, keeping it out of Moscow’s predatory clutches.

Now the US is pulling out, and Russia is once again becoming active in Afghanistan. New Kremlin-sponsored projects are once again taking hold, with factories, cultural centers and other types of construction appearing all over the country.

Who knows, Lashkar Gah could one day be known as “Moscow on the Helmand.”

More from GlobalPost: An author questioned God in Afghanistan's press. Here's what happened next