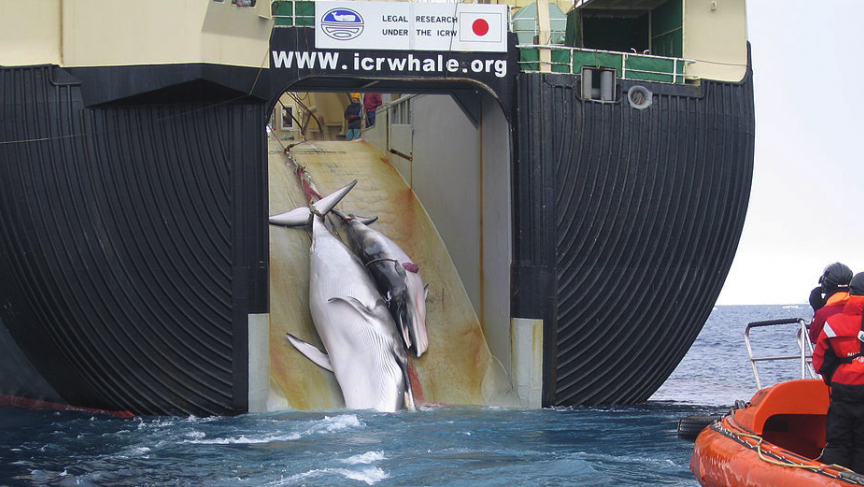 An adult and sub-adult Minke whale are dragged aboard the Nisshin Maru, a Japanese whaling vessel that is the world's only factory whaling ship. Australian customs agents took this image in 2008, under a surveillance effort to collect evidence of indiscriminate harvesting, which is contrary to Japan's claim that they are collecting the whales for the purpose of scientific research.

Despite the global moratorium on commercial whaling that began in 1986, Japan continues to kill thousands of whales under the guise of “research.”

“Japan claims it’s necessary research, important for the management of whaling,” says Phillip Clapham of NOAA’s National Marine Mammal Laboratory in Seattle. “Many of us believe it is simply a convenient way around the moratorium.”

“There's very little the Japanese are doing that is of direct relevance to the management of whales,” Clapham argues. “Even if it is, nowadays there are many non-lethal techniques that are as good, or in many cases better, than killing a whale to study it.”

Since 1987, Japan has killed more than 14,000 whales under a program run by the Tokyo-based Institute of Cetacean Research (ICR). “The ICR is funded by government subsidies and by the sale of the meat in Japanese markets,” Clapham says, “So there is a very strong incentive to continue whaling — because, essentially, if whaling stops, then that institution goes out of business.”

The ICR program exists in two places: the Antarctic, and the North Pacific. Clapham says the program primarily targets the minke whale, the smallest of the so-called “large whales.” In the North Pacific, larger whales are being taken, including Sperm whales, Brutus whales and Sei whales.

In 2010, Australia and New Zealand took Japan to the International Court of Justice, claiming Japan’s whaling program was not for the purposes of scientific research. Clapham says the court looked at a number of factors: the scale of the Japanese catch in the Antarctic; the way that they calculated the sample sizes; the number of animals they've killed relative to the sample size; the research publication record and how well they had coordinated with other research programs.

The court concluded that Japan’s program was not for the purpose of scientific research and that it violated Article VIII of the Whaling Convention. It ordered Japan to cancel and revoke any permits for the Antarctic program and not to issue any more. The ruling did not affect the North Pacific program. The International Whaling Commission was optimistic that Japan would abide by the ruling and end its Antarctic program — and perhaps even extend the stoppage to the North Pacific. “But as we've seen in subsequent months, none of that has happened,” Clapham says.

“They continued the North Pacific program this summer, albeit with a somewhat smaller catch, and they've announced their intention to submit a new proposal to the Whaling Commission,” Clapham says. “And no matter what criticism they get of that proposal, they will say that it is in keeping with the ICJ judgment and start whaling again starting in Antarctica in late 2015.”

The Japanese also argue that they must limit the number of whales because whales eat fish the country relies on. “That’s a ridiculous argument,” Clapham says. “First of all, many of the big whales don't eat fish at all. In fact, the largest biomass of the world's baleen whales live in the Southern Hemisphere, and they consume primarily krill.”

Moreover, current whale populations are a fraction of their levels in pre-whaling times and back then commercial fish populations were larger and much healthier than they are today, Clapham says. Human overfishing is the cause of the precipitous decline of commercial fish stocks worldwide, not whales.

“In fact,” he says, “recent studies have suggested that, to put it bluntly, through defecation whales contribute invaluable nutrients in large quantities to the marine environment, and in doing so stimulate primary production, which is the base of the whole food chain.”

The good news is, despite Japan’s whaling practices, many whale species are starting to recover now, Clapham says. “Humpback whales, for example, have come back remarkably well in most places. There are an estimated 20,000 in the North Pacific right now, and probably around 10,000 to 15,000 in the North Atlantic.”

“They seem to be doing very well without human interference,” Clapham says. “They're very resilient.”