It was 1988, and the Soviet Union was preparing to end its disastrous war in Afghanistan. But Soviet officials still wanted to leave the country with a bit of positive spin.

"[They were] trying to stress that what the Soviets had brought to Afghanistan was not just war, but that they had also brought science, modernity and technology," says Jenny Norton, producer of a new BBC documentary called "The Spaceman of Afghanistan."

So what better way to show that than sending an Afghan into space? None, apparently. That's how Ahad Momand ended up spending a week at the Mir space station.

Momand is the first and still only Afghan to ever fly in space. He was born in the countryside of Afghanistan and always dreamed of flying. Living in rural areas meant there was no street lighting, so Momand would get a stunningly clear view of the night sky.

"He said he would often be out on the fields with his dad, looking at the stars and dreaming of maybe one day flying," Norton says.

When he was 16, Momand moved to Kabul and ended up training at a Russian flight school in Bishkek, Kyrgyzstan. "It was a very interesting flight academy," Norton adds. "Other people who have trained there were the former President of Syria, Hafez Assad."

After his training at the academy, Momand went back to Afghanistan and was selected to train for a Russian space mission. Yet he wasn't the only Afghan who would go through the training.

"It's common in space missions to always have a back up crew because right up to the very last moment, something can go wrong," Norton says. So Momand was competing with Mohamed Davron, who was older and higher-ranking. Many thought Davron would be the one going to space.

But just a few weeks before the mission, Davron came down with appendicitis and had to drop out. "It must have been very difficult for Davron to be the person who got so near, but so far," Norton says.

In fact, when Momand landed and become a national hero, Davron had to come along for all the celebrations. "[Again], he had to be the back up person," Norton says. 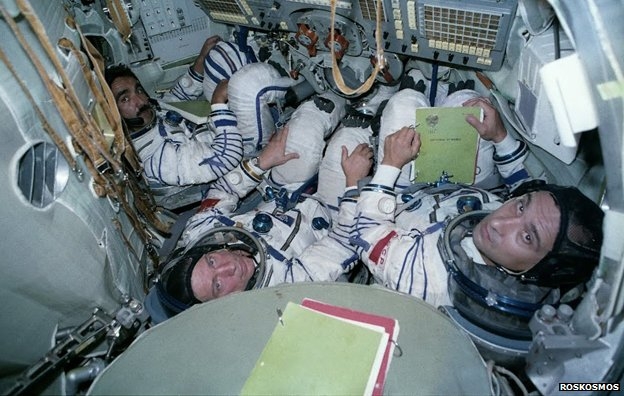 Ahad Momand at the Mir Station in space.

Of course, that required Momand to come back in the first place, which wasn't a sure thing.

"The return flight should have taken them a few hours, but there was a computer malfunction," Norton explains. "Their engines stopped working and they were at risk of being stuck in space."

Momand and his mission commander were stuck in their small capsule for 24 hours. They had no food, no water and no guarantee they would make it back to Earth.

"The most amazing thing is how Momand and his mission commander really brushed aside how frightening and stressful this must have been," Norton says, "They told each other jokes, and it was only when they got back that it hit both of them just how close they had come to dying."

Today, Momand and his family live in Germany, where he works as an accountant. And as the war in Afghanistan winds dow, Norton says Momand hopes to return and mentor young Afghans so that he won't be the only Afghan astronaut for much longer.