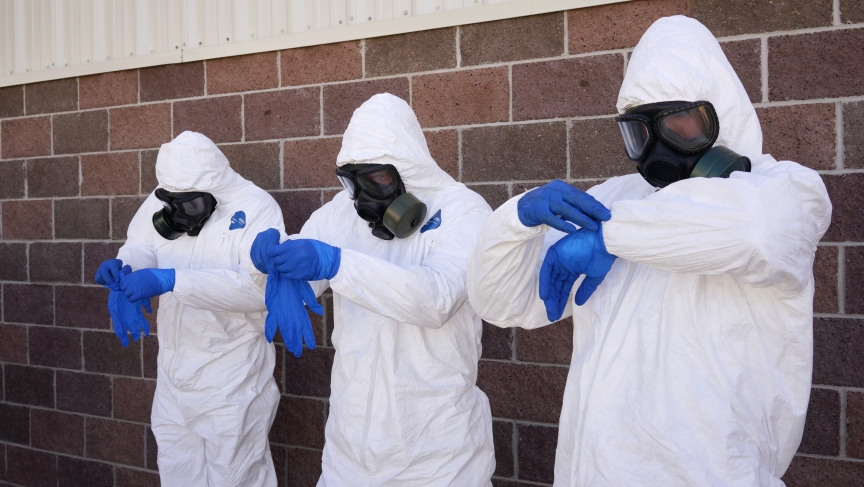 Soldiers from the US Army put on one of three pairs of protective gloves during their final session of personal protective equipment training.

Big data is a buzzy term right now. It's supposed to be changing the world, one dataset at a time.

But what, exactly, is big data?

Essentially, big data consists of data collections so large they are unable to be computed using traditional software tools. What falls under the category of “big data” is vast — it can be anything from financial transactions to Tweets, emails, videos, and text messages. Because the data is so broad, big data tends to allow analysts to predict sweeping trends and possible outcomes more than it does concrete statistics or results.

Now there's some hope that big data could be put to use to rein in Ebola.

What does this have to do with Ebola?

Epidemiologists have a vested interest in big data, especially when it comes to Ebola.  In particular, they're interested in mobile call data records, or CDRs. When a cell phone makes a call, the user’s network automatically creates a record that logs the receiver’s number, the caller’s number and the cell tower that processed the call.

“The base station that handled the call is a rough approximation of location,” explains Kenneth Cukier, the Data Editor for The Economist. “So what you would be able to do is have a rough proxy for where people are and where they’re going.”

Previously, health organizations would have to track the route and lifespan of a disease through surveys and censuses — a flawed system, as that data isn’t updated frequently enough to get a clear idea as to where the outbreak has spread.

But with CDRs, the information is logged in real time. If this method could be effectively implemented in a place like Sierra Leone, researchers could track population flow, thus anticipating where the disease might spread before it even gets there. Then health officials could put proper protocols in places.

It's important to note that its nearly impossible to catalog the CDRs of just those infected with Ebola. Rather, the CDRs would be those of anyone who uses a cell phone. But this information is valuable in understanding where the general population is going to and from during an outbreak.

This wouldn't be the first application of big data in the epidemiological space.

Previously, researchers used big data technology to track Malaria outbreaks in Namibia and Kenya. And in 2009, it was implemented to keep tabs on the efffectiveness of government health warnings during the Mexican swine flu crisis.

With Ebola, using big data could prove to be a more difficult proceess — only one-third of West Africans own a cell phone. But many organizations — including Flowminder, a Swedish non-profit — have already managed to map population mobility throughout the region, regardless.

The main problem, Cukier says, it generating institutional change to get these tactics implemented on a larger scale.

“This data is not being used. And the reason why is for a lack of leadership, because the mobile phone operators haven’t made it available to approved outside researchers, because the governments haven’t ordered them to do so, and it’s because the entities that could do that — whether it’s the United Nations ... or it’s the Mobile Phone Trade Industry Association — they have just been incompetent in trying to get both the regulators and the operators to open up these call data records.”

When it comes to big data, it's usually hard to pinpoint individuals within the data. The way in which CDRs are aggregated makes it so researchers don't know who is there specifically — only that someone is there.

"The fear of death should be a greater incentive to do this than the potential privacy violation that would come from using this information," he says. "This is a global health crisis. If we don't use this information now, when?"