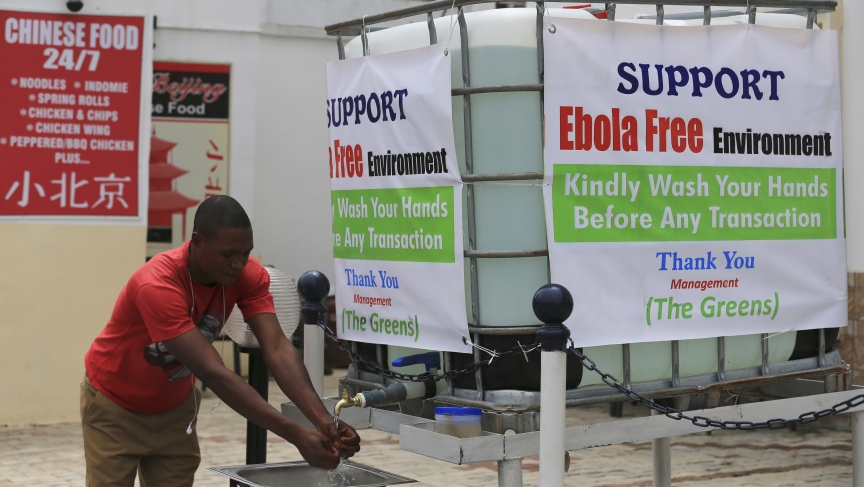 A man washes his hands at a tap outside the Green Pharmacy at Area 8 in Abuja, Nigeria.

This week finally brought some good news for a part of the world that needs it badly: The World Health Organization said on Monday that Nigeria is now “Ebola free” after 42 days with no new cases.

“This is a spectacular success story that shows to the world that Ebola can be contained,” said Rui Gama Vaz, a WHO representative in Nigeria, to reporters Monday. “But we must be clear that we only won a battle — the war will only end when West Africa is also declared free of Ebola."

So what did Nigeria do right, and what can it teach other nations on how to cope with the crisis?

“The lesson is that Nigeria really took charge from the get-go,” says Alexis Okeowo, a freelance journalist based in Lagos. “When the first patient with Ebola landed in Nigeria— a Liberian-American man — they initially thought it was malaria. But, due to his symptoms, they quickly realized that it could be Ebola. They did rapid tests, they notified officials, and it was quickly declared an emergency.”

Many Nigerians have called their government incompetent, especially when 200 schoolgirls were kidnapped this spring by terrorist group Boko Haram. But the response to Ebola was a welcome surprise.

“Especially with the kidnapping of the girls last April, there was a sense that we really couldn’t trust our government to do much to protect us," Okeowo says. "But with Ebola, [the government] really turned things around and handled the crisis pretty well, unlike its neighbors. They surprised us and have given us some renewed faith.”

The doctors who treated Nigeria’s first Ebola patient acted quickly, Okeowo says, wasting no time in placing him in isolation.

“The patient wanted to be released and to sort of walk around and be outside,” she says. “They prevented that, and many of them died. After that, officials here with the local and state governments sent out teams of health workers and volunteers who were really effective in visiting thousands of homes and educating thousands of families.”

Okeowo adds that healthcare workers and volunteers in Nigeria tracked down almost 1,000 people who had contact with Ebola patients and monitored these individuals for 21 days.

“If they did get sick, they were treated well and isolated,” she says. “It was really from the top down — from government officials to volunteers on the ground who were really vigilant. As a result, they made Nigerians more vigilant in the way we interacted with each other.”

Over 100 Nigerian volunteers are now working to fight the Ebola virus in Liberia, a country that has lost more than 2,400 people to the disease. “It’s nice to hear that Nigeria is not just satisfied with having eradicated it from its own country, but it’s going to help its neighbors deal with the disease,” Okeowo says.