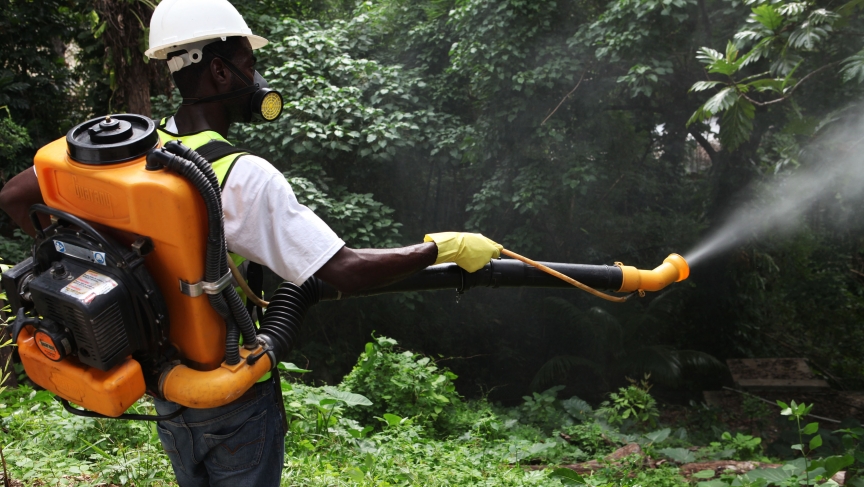 A worker from a private company fumigates a property for mosquitoes in Port-au-Prince, May 23, 2014. The painful mosquito-borne virus called Chikungunya is spreading quickly through the Caribbean, causing alarm in Haiti and the neighboring Dominican Republic.

Jamaican Prime Minister Portia Simpson Miller announced on Monday that her country is in a "national emergency" this week after the outbreak of the chikungunya virus.

The diesase shares many of the same symptoms as dengue: high fever, headaches, muscle and joint pains, nausea and rashes. The symptoms can last up to 10 months, and have lasted years in some cases.

“This [disease] tends to occur in people who have, maybe, an underlying disease, such as hyper-tension or a cardiovascular issue, and our elderly," Olowokure says.

The disease has spread throughout the region since surfacing on the island of St. Martin in 2013. Now there are almost 800,000 suspected cases in the Caribbean.

“This particular virus has been introduced into the Caribbean population for the first time, so there’s been no previous experience with this virus amongst the people in this region," Olowokure says. That means there's no immunity in the region, and the virus can — and has — spread quickly.

The virus’ name comes from Makonde, an East African language in which "chikungunya" translates as “that which bends up." The name is a tongue-twister, but not for 11-year-old Jamaican rapper Wayne J, who released a song devoted to the subject.

Earlier this month the Jamaican government created an Emergency Response Team to coordinate national actions to contain the virus and reduce the number of cases. Dr. Olowokure believes that this could slow the spread of the virus.

“I think declaring a state of emergency is a step toward ensuring that people take this particular situation seriously," he says. "It would mean that Jamaica is pushing resources in that direction, is communicating with the population — informing them of how the virus is transmitted and how they can protect themselves and prevent further propagation of the vector in and around their homes.”