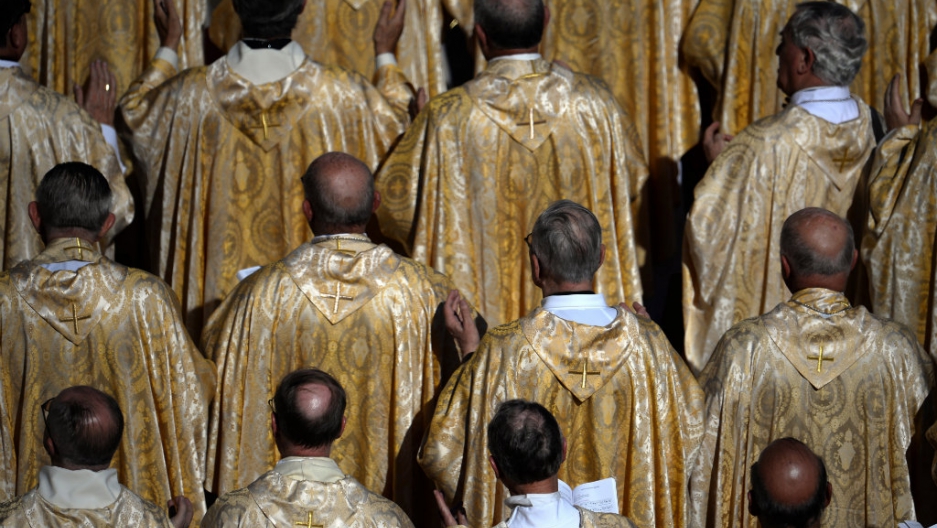 Bishops attend a papal mass for the beatification of Paul VI, who died in 1978, and the end of Vatican's synod on the family at St. Peter's square on Sunday, Oct. 19.
Credit: FILIPPO MONTEFORTE
Share

VATICAN CITY — The closing of the Extraordinary Synod of Bishops on the family was celebrated in a Mass for thousands, led by Pope Francis in the Vatican City on Sunday.

It followed the release of the official record of the synod, or Relatio Synodi, which was approved paragraph by paragraph by the assembled bishops on Saturday, with three of the 62 paragraphs failing to get the necessary votes. Though most synods don't generate much news, a draft version of the report released last week ignited a firestorm when a section under the heading “Welcoming Homosexuals,” said, “homosexuals have gifts and qualities to offer the Christian community,” and asked if the community was capable of welcoming people with such “tendencies.”

“It's very disappointing that the synod's final report did not retain the gracious welcome to lesbian and gay people that the draft of the report included,” DeBernardo wrote. “Instead, the bishops have taken a narrow view of pastoral care by defining it simply as opposition to marriage for same-gender couples.”

The section in question is now titled “pastoral attention to persons with homosexual orientation" and the new text removes mention of LGBT communities having anything to offer Catholics. It reads:

“55. Some families live the experience of having within them people with homosexual orientation. In this regard, we have questioned what kind of pastoral care is appropriate to deal with this situation by referring to what the church teaches: ‘There is no basis whatsoever on which to assimilate or to establish, even remotely analogously, the notion of same-sex unions with God’s plan for marriage and the family.’ Nevertheless, men and women with homosexual tendencies must be accepted with respect and sensitivity. "In their regard, every sign of unjust discrimination should be avoided.

“56. It is totally unacceptable that the pastors of the church suffer the pressures in this matter, and for international bodies to condition financial aid to poor countries on the introduction of laws that institutionalize ‘marriage’ between persons of the same sex.”

“[The] comment about supposed ‘international pressure’ to accept same-gender marriage selfishly views the hierarchy as the victims, not LGBT people who receive unjust and oppressive treatment by governments, church, families and society,” DeBernardo said of paragraph 56. Paragraph 55 did not pass the vote, needing a two-thirds majority vote.

Several members of the clergy spoke in support of the new language.

“It [the final Relatio] is open, embracing and accepting everybody,” said Cardinal Oswald Gracias of India. “I think it is very balanced, it also admits we don’t have all the answers today. But it is also an implicit invitation to continue…”

And the fact that some of the language did not pass the vote does not mean they were completely rejected, said Father Thomas Rosica, CEO of the Salt and Light Catholic Media Foundation in Canada and consulter for the Pontifical Council Social for Communications.

“It means it’s still a work in progress,” he clarified. “The fact that there has been this open discussion shows the maturity of the process, though there is still a long way to go.”

This Relatio Sinodo will act as the document for bishops to take back to their respective conferences, and to use for discussions and debate over the course of the next year. It will then go before an Ordinary Synod in October 2015 for final approval.

But the question that will continue to be asked over the coming year is: Are homosexuals welcome in the Catholic Church or are they considered sinners?

“Yes, they are most certainly welcome,” said Cardinal Gracias. “They are part of the church and we care for them. There’s no question of the condemnation of a person.”

“The synod is naturally a walking together so there have been differing views and opinions, but there is distinct uniformity,” he continued. “There are different views because of different needs, different backgrounds, different cultural realities… there are the catholic principles which we all know… there is also the question of openness. The bishops of the world are searching for how to address the pastoral challenges.”

The idea of the church as a welcoming organization, Cardinal Gianfranco Ravasi later added, is not a new one. He cited Jesus’s encounter with lepers, who had been excommunicated by society: “People stayed far away but Jesus touched the lepers and created physical contact with them,” Ravasi said. “The church should welcome as Jesus did.”

The clergy should be “ready to see, ready to listen” to the changes in society. But, he warned, “on the other hand, the church has its own identity — its own message, its own ideas.” A balance needs to be reached, to include families that are different, he said.

While still praising the work of the synod and happy for the discussion that is now open around the rights of LGBT Catholics, DeBernardo called on the church to take the next year to change its perspective on LGBT communities.

“Pastoral care should focus on for LGBT people as total human beings, many of whom have suffered significant alienation and personal harm, and not just as sexual beings,” he said, adding that fathers should look back to the first draft of the Relatio and “focus on the gifts that LGBT people bring to the church.”