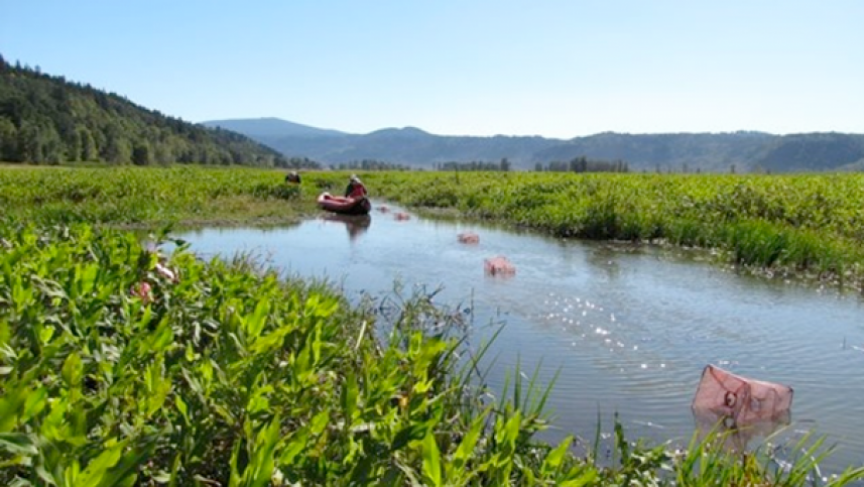 Scientists with the US Geological Survey gather samples near coal train tracks in the Columbia Gorge near Washougal, Washington. Little research has been done on how coal interacts with the environment.

The US Geological Survey is wading into an environmental controversy in Washington State — literally.

Port operators in Washington have proposed building two new large coal terminals that would export 100 million tons of coal across the Pacific. But the USGS wants to know what effects coal dust might have on surrounding wetlands.

Bob Black, the lead researcher for the new USGS study, is hoping to add good science to what has already become an emotional debate. “I understand people’s concern, but our role here is to try and see if the science supports those concerns or not,” he says. “We have to be as unbiased as we possibly can be.”

Black and his team are gathering samples from a stretch of marsh between the Columbia River, near Portland, and the tracks carrying the trains transporting loads of coal. Right now, only one or two coal trains come through here per day. But if the proposed coal terminals are built in Longview and near Bellingham, Washington, that number could rise to more than 20 trains per day.

Coal contains mercury, arsenic and other metals, but scientists don’t know whether those contaminants are easily released from the coal when it gets into the environment. So Black and his team are looking for potential signs of coal pollution in the food chain, from fish to dragonfly larvae.

Tiny organisms in marshes break down organic material, which gives these areas their familiar rotten egg smell. The fear is these organisms might do the same thing to coal, releasing the mercury from the coal into the food chain. “I like to think of it as ‘activating’ the mercury,” says Collin Eagles-Smith, a USGS ecologist. “it makes it more biologically active, more toxic.”

But the scientists don’t know for sure if that’s actually happening in places like this, where coal and wetlands briefly collide. And they also don't know yet where exactly where any potential mercury comes from. Mercury can travel in air pollution for thousands of miles, and some research has traced mercury pollution in the US to coal that was burned in Asia.

The scientists will examine the "isotopic fingerprint" of any mercury they find to see if coal trains that pass through wetlands are serving as a sort of "direct deposit" of mercury pollution. “There are multiple locations through the Northwest where tracks are near water, so it should be a concern,” Bob Black says. “[It’s] something to consider in more than in just a few locations."

The USGS hopes to have results from their study within the next six months. They’ll be sharing their findings with the state and federal agencies that are studying the environmental impact of the proposed coal terminals.

This story was reported by Ashley Ahearn of the public media collaborative, EarthFix, and aired on PRI's Living on Earth with Steve Curwood.