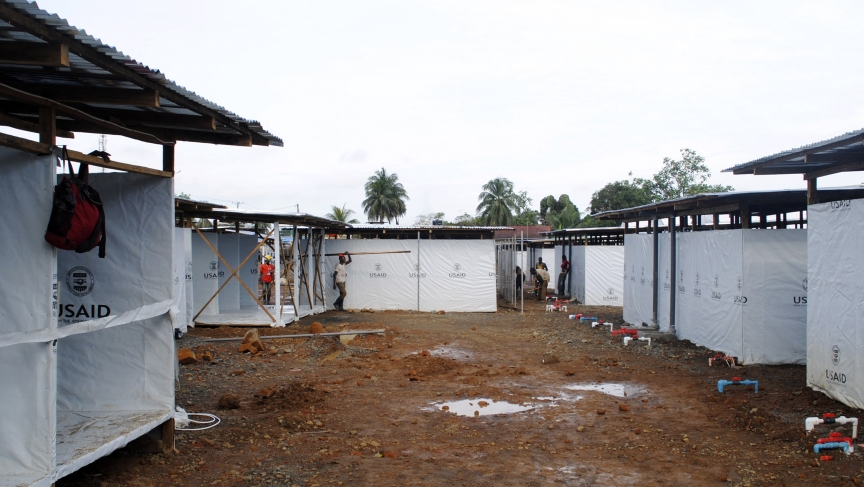 Workers put the finishing touches on an Ebola virus treatment center in Monrovia on October 9, 2014.

More and more healthcare providers are being diagnosed with Ebola, hammering home the fact that the outbreak isn't just dangerous for patients. So how are treatment centers making sure everyone is safe?

One way is by managing the flow of patients, says physician Sheri Fink, who's reporting on the outbreak in Liberia for The New York Times. It's essentially a one-way flow from low to high risk — if you survive, you leave.

That means your shoes and hands are blasted with a chlorine solution. Only then can you begin to enter the patient areas. The next step is to pull on several bulky full-body suits, giving people the yellow-Michelin-man look you might see on the news or in the movie "Outbreak." "And then there are masks and goggles and multiple layers of gloves," Fink adds.

Once you've got all of that on, you can get to one of two different wards. The first is a suspect ward, the place people come when they are suspected of having Ebola. They wait in the ward for their test results; if those results are positive, they move to the second ward, the confirmed ward.

It's in this ward where patients are treated. If they recover and pass a blood test, they're moved into the final section of the facility. "They got through a shower. They have to put all their personal belongings into bleach solution, including their cell phones and SIM cards," she says. "And then they come out and they get to go home."

Fink has seen people get to go home, and says it's a wonderful moment when that happens. It's still been a difficult story to cover, but she's not tempted to drop the notebook and start treating patients. Instead, she says, there are little things you can do.

“You can help our by smiling at a patient, or handing a water bottle over," she says. "And I think that’s human and any reporter who is in a situation like this in a big emergency can do. Humanity comes first. And when there are opportunities to cheer people up, to give them a smile, to encourage them ... there’s no problem with the dual job description in that case.”