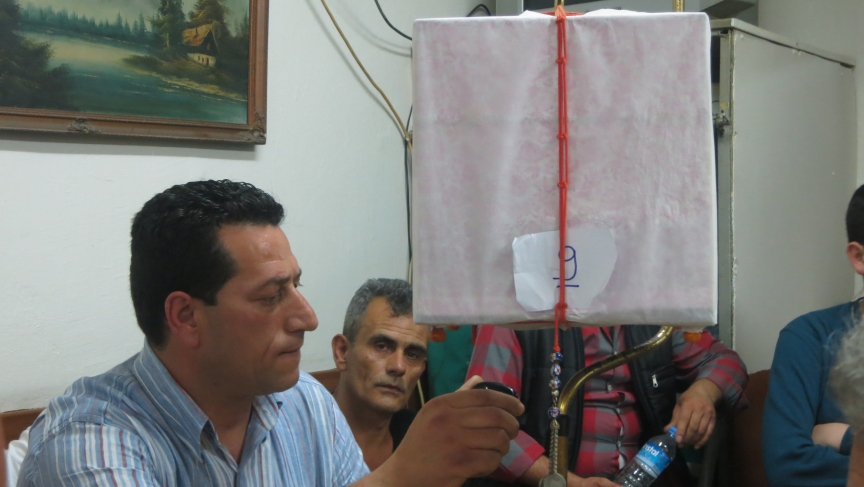 Competitors try to get their birds to sing by playing bird calls on their phones. They compete for the bird with the longest song.

In his small home in a historic district of Istanbul, Nedim Kasap has birds; dozens of birds. He keeps greenfinches, to be specific. They’re kept in small cages, about a foot wide and a foot tall. Most of them are in a room together, but Nedim’s favorites are hanging in the hallway, the living room, the kitchen and every other room of the house.

Why? Because he sells them to men who want to compete in song competitions.

Nedim explains that back when people didn’t have TVs at home, men would gather at each other’s homes and listen to their pet birds sing. "They’d drink tea, play board games like backgammon, hang out and chat,” Nedim says.

Greenfinch competitions are a centuries-old tradition that dates back to the Greek residents of the Ottoman Empire. “After we Turks took it over, we totally ruined it!” Nedim laments. “We all live in apartment buildings with no gardens that smell like roses.” He’s bummed that everyone is home by 7, watching their favorite TV shows.

The culture of keeping songbirds in the family garden isn’t around anymore, but the competitions still are. But Nedim complains they’ve become too competitive and not so fun.

At this competition there are about 50 to 60 guys ranging in age from 17 to 70. They’re all gathered in a small stuffy basement, sweating and drinking tea. Some are there to compete, and others, like Nedim, are just there for the companionship.

“The first time I heard their songs, their voices, I fell in love,” says Recep, Nedim’s friend. “Our friends are all like this. You hear a bird sing like that one and you just can't turn back after that. You love it!”

Recep — like most of the guys at this competition — isn’t using his last name because what they’re doing is technically illegal. But he says they can’t help it. “Once you hear these birds sing, you become obsessed!”

Keeping greenfinches, which are small, wild birds, is forbidden, Recep explains. But he says he and his finch-keeping friends want to find a middle ground with the government. “This is our illness, our obsession, our hobby,” he argues, echoing the sentiments of everyone in the room. “It’s such an old tradition.”

If the authorities do catch them, they get fined 500 Turkish Liras per bird — that’s about $250. Most guys have multiple birds, and no one has that kind of cash on hand. But they take their competitions seriously, and it’s worth the risk to keep them going.

Everyone gets quiet as the competition is about to begin. Contestants are placed in groups of 4 after picking numbers out of a hat. Then, they get 10 minutes to make their birds sing.

If a bird stays quiet, his keeper tries to coax him, gently rubbing the outsides of the small cages. Some use a birdcall from their phones to get their birds to reply. Others make a fluttering sound with their lips.

If they get lucky, two birds start calling to each other.

“You get points for length — 30 points, coordination is 20 points, a good original song is 15 points, a variety song is 10 points,” one judge explains. Contestants can get points docked if their bird’s song comes out harsh or aggressive, or if they don’t sing at all.

These guys get that to an outsider it seems a little weird: a bunch of men getting together with small cages obsessing over little birds. But most of them have been doing this for decades; Nedim was 7 when he started. Now he’s 60.

Yasar has been at it for 35 years. “We take better care of them than our kids,” Yasar declares. Clearly that work has paid off, because he won the competition this time.