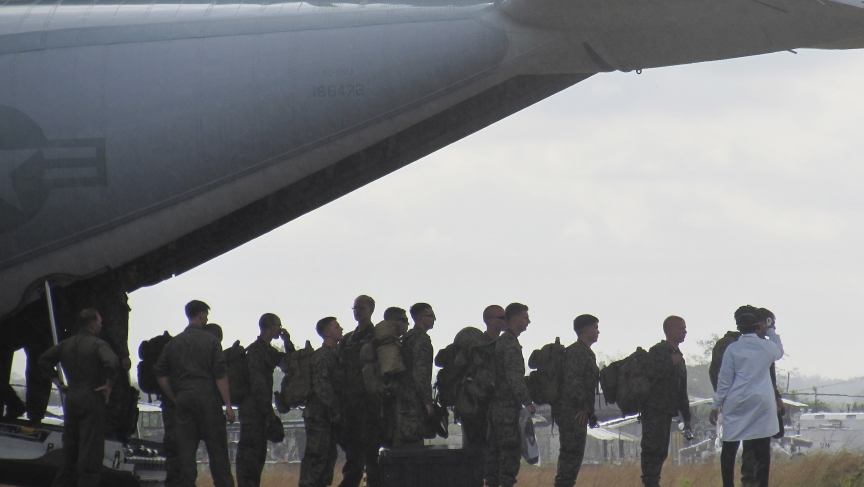 US Marines have their temperatures taken upon arrival at Roberts International airport outside Monrovia, Liberia, on October 9, 2014.

About 100 US Marines arrived in Liberia Thursday to help fight the Ebola outbreak. They're part of the response to what the US ambassador to Liberia calls the biggest diplomatic challenge of her career.

"It's very easy to look at this and say 'Oh disease outbreak. We know how you break the chain of transmission, it must be quite simple,'" says Deborah Malac, the American envoy to Monrovia. "'All you need to do is take people out of communities and put them some place where they can receive safe care in the hope that perhaps they will recover.'"

But the reality on the ground is far different, she says: "The complexity of the response is something that you don't realize when you're looking at it from the outside."

The Marines that landed on Thursday brought the American military force in the country to about 350 people. Eventually, some 4,000 American servicemembers will be deployed to help tackle the epidemic in West Africa.

Malac says the Marines will help build Ebola Treatment Units, or ETUs, outside of Monrovia, often in places where access by medical providers is difficult and supply lines can be hard to maintain.

"Building an Ebola Treatment Unit is not only about clearing a space and putting up a tent and moving sick people in," Malac says. "There's a very precise outline of where the patient flow needs to go in order to protect both the patients and the caregivers, and there's a great deal of supplies and equipment that needs to come in, as well as the rotation of staff."

And that, she points out, is just talking about a single unit. "It you're trying to multiply that because of the scale of the problem we have here, it becomes very difficult very quickly," Malac says.

The ambassador has watched the outbreak from its first days, seeing it rapidly engulf the life and culture of Monrovia.

"We see less commerce in the street, children are not in school, so we see a number of children in the streets," she says. But, she adds, there's plenty of normal life happening as well, with people working and shopping.

"So in many ways it looks normal on the surface," she says, "but then you see the ambulances going through the streets taking sick people to the ETUs, and occasionally you will see the trucks carrying the dead bodies when they are headed out to the crematorium."

But Malac is hopeful the strategy of intervention is working. "We are making progress," she says. "All of the pieces that are needed to create all of the interventions that are necessary to break the Ebola transmission curve are here. We just need to build on them more quickly."