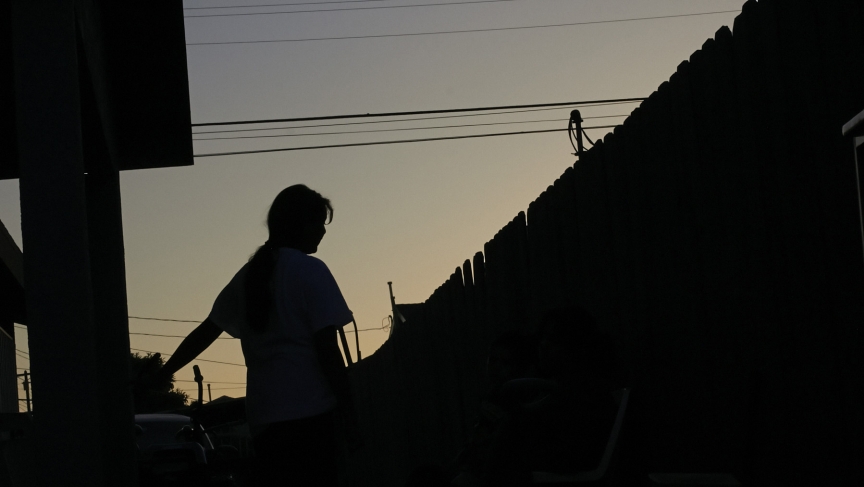 At dusk in Los Angeles, Maria, 15, who escaped gang threats and extortion in El Salvador, waits to hear from US Citizenship and Immigration Services' office about her asylum plea.

While other kids enjoyed summer break, a teenager named Maria had something more serious on her mind. One day in June, she slipped into her only dressy jacket and traveled south to Anaheim, to a nondescript building housing the local office of US Citizenship and Immigration Services.

The girl knew she’d be less than a mile from Disneyland, “the happiest place on Earth.” But for Maria — a pseudonym — fun was a luxury she couldn’t afford that day. At the tender age of 15, she faced an interview to plead, essentially, for her life.

“Two years ago a friend of mine died in a very cold-blooded way. She died cut to pieces. My best friend,” Maria said, starting to recount what she told an asylum officer. She was asking for refuge from violence so chilling her family thought it better to smuggle her to the United States in the spring of 2013.

As she recalled the story again, Maria’s soft voice trembled, and tears spilled down her cheeks.

She said police in El Salvador asked her to identify body parts pulled from a bag dumped in a river — she recognized a birthmark on her friend’s leg. She said she also witnessed a boy shot and dragged off after a soccer game, a boy later found hanged. And before she fled, Maria said, she’d been asking her father, a truck driver in the US, for more and more money so she could pay MS-13 gangsters $60 a month to leave her alone.

“I was traumatized,” Maria sobbed. “I still am from seeing that body split apart. That dismembered head. Those arms. ... As time went by, I didn’t want to go out, or eat, or do anything. The only thing I wanted to do was to die. I told myself that the same thing could happen to me.”

After the 90-minute interview, the asylum officer told Maria she might know the outcome of her request in two weeks. More than three months later, after starting 11th grade this fall at a public high school in Los Angeles, she is still waiting for an answer.

A test for US asylum

So far in 2014, there has been an 88 percent increase in “unaccompanied minors” detained at the border; more than 66,000 kids traveling without parents were apprehended by Border Patrol between October 2013 and the end of August.

That glut of young people will test the US asylum system as never before — both on American soil and in Central America as well. A record number of those young people, including Maria, are expected to apply for asylum based on gang persecution, a basis for refugee status that’s becoming more common and is a highly debated area of law.

On Sept. 20, the White House also approved a plan to allow a limited number of minors to apply for refugee status — the equivalent of asylum — from inside those three Central American countries. They can do so if their parents are in the US with legal status, potentially including parents with only temporary permission to remain in the US.

The US has previously done in-country refugee screenings in Haiti and Vietnam. But just like Maria, who crossed the border illegally in 2013, children applying for refugeee status in their home countries will face eligibility requirements that go beyond simply experiencing fear.

And in the US itself, the asylum application system for has been designed to be deliberative and compassionate, but is by no means a sure thing for kids like Maria.

Some Americans have reacted with unvarnished hostility to the flood of teens and preteens and their claims to be seeking a haven from relentless violence. “They’re going to be sucking us dry,” said Cape Cod resident Mary Woodruff, as Boston’s WBUR radio taped public debate over a proposal to shelter detained kids at a National Guard base in the popular vacation region.

Most of the public seems conflicted. Fifty-two percent of respondents in an Associated Press-GfK opinion poll in late July said children claiming to be fleeing gang violence shouldn’t be treated as refugees in need of asylum. But a survey by the nonpartisan Public Religion Research Institute the same month found that 69 percent support allowing minors to stay if US authorities decided it was unsafe for them to be deported.

Unaccompanied minors have an indisputable right to request an immigration hearing and seek asylum, but skeptics want them to be treated more like adults. Those grown-up applicants are subjected to rapid “credible fear” tests that can lead to their “expedited deportation.” Refugee rights advocates, meanwhile, are trying to make sure these kids — who have no right to appointed counsel — have help from attorneys.

And as federal officials rush to resolve the issue, members of Congress are aggressively attacking the current asylum system — as well as children’s claims they actually face mortal threats.

Meanwhile, volunteer lawyers are struggling to document the horrors some teens have faced — while the asylum officers must make decisions the children say could mean life or death.

This story is an excerpt from an investigation in collaboration with the Center for Public Integrity. To read the full piece, please click here.