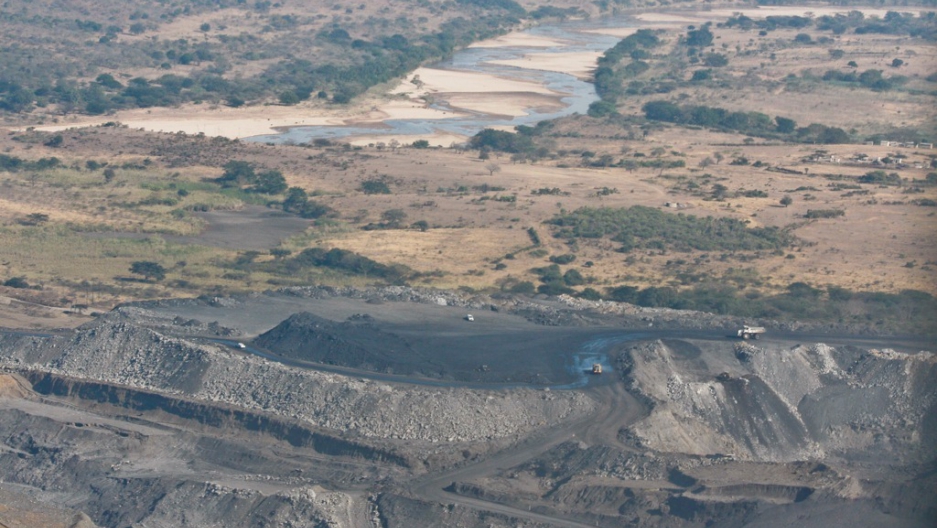 One of several coal mines in the area around the Hluhluwe-iMfolozi game reserve in South Africa's KwaZulu-Natal province. In the background is the iMfolozi River, which runs to the estuary at St. Lucia, an important wetlands area and breeding site for sea fish.
Credit: Erin Conway-Smith
Share

OCILWANE, South Africa — The view from above is startlingly beautiful: gentle green hills roll for miles, crisscrossed only by the paths of animals tracking through what was once King Shaka Zulu’s private hunting grounds.

This is the Hluhluwe-iMfolozi game reserve — the oldest proclaimed park in Africa, dating to 1895, and one of the most important in the world. Here, the white rhinoceros was saved from extinction in the 1960s. Today the park offers a symbol of hope at a time when South Africa’s rhinos are being slaughtered in record numbers for their horns.

But all around the park, beneath its hills, are valuable coal reserves. Flying over the southern boundary, a swath of sooty black suddenly comes into view. Several large, open-cast coalmines — plus a handful of small-scale operations — surround Hluhluwe-iMfolozi, in astonishing contrast to the wild green of the reserve.

Now there is a new threat: the planned Fuleni Anthracite coal mine, which would border the park and which many fear will cause irreversible damage to this historic reserve, its endangered rhinos and the people who live nearby. The application earlier this year for the new 36,000-acre colliery by mining firm Ibutho Coal, has alarmed environmental groups and local communities.

Roger Porter, a conservationist, ecologist and retired member of the provincial parks board that governs Hluhluwe-iMfolozi, said the proposed mine could open a new front for rhino poaching. Already this year, 821 rhinos have been killed in South Africa, approaching the record 1,004 poached in 2013. South Africa is home to nearly all of Africa's white rhinos and many of its black rhinos.

“Undoubtedly, poaching will increase because of the mine,” Porter said. “It is well known that crime increases around mines.” This is in part due to the rise in population and activity around mines, making it easier for outsiders to come and go in what were once rural areas where everyone knew each other.

More from GlobalPost: Forget cocaine: Rhino horn is the new drug of status

The potential environmental side effects could be far broader. For one thing, Porter is concerned that winds blowing coal dust from the open-cast mine could lead to toxic fallout in the game reserve, poisoning the land and water.

Also at risk is the iMfolozi river, which flows through the area and into the estuary of Lake St. Lucia — the largest estuarine lake in southern Africa, and an important nursery for sea fish. There are concerns that sulfuric acid and other impurities from mining could affect the fish, crocodiles and other creatures that live in these wetlands.

At a meeting held recently under an acacia tree, a shelter from the heat of the sun, the Zulu chief and elders of Ocilwane village said that existing coal mines in the area have already caused health problems.

Bhekukwenzelwa Ndimande, an elder, said he has seen cattle fall sick from mysterious diseases after drinking from water sources near mines. People have become ill, too.

“When they are blasting that side, the dust travels to here. Here we are living with asthmatic people and the dust has an effect on them,” he said.

His son, Phila Ndimande, said that 18 of his cattle have died from strange illnesses in the past year alone. The community thinks this is related to mining, and fear their cattle’s grazing pastures will be ruined if the new mine is built at their doorstep.

“This is where I grew up. I wouldn’t want to lose a place like this,” Phila Ndimande said.

Both father and son worry that the animals of Hluhluwe-iMfolozi park will also be hurt by pollution — and by poachers — if the Fuleni mine is built.

“One of the concerns about the mine is that if it comes, the wildlife will go extinct, the rhinos and the elephants,” elder Ndimande said. “If the mine comes no one will be able to monitor who is coming and going.”

“We will be the last ones to know about these animals. Our ancestors will never know them. They’ll die because of the pollution. That’s exactly what is killing the cattle.”

Ibutho Coal applied to South Africa’s department of mineral resources in January 2014 for permission to build the mine. The required process of environmental impact assessments and community consultations has been grinding along since, and a decision could come early next year.

A government spokeswoman, Phuti Mabelebele, said the department was awaiting an environmental management plan report. This will be sent out for consultation with other government departments, and with the provincial wildlife authority.

‘The department will make a final decision when all processes have been completed,” Mabelebele said.

Ibutho Coal says it has commissioned various studies of impact — for example, looking at the potential effects of coal mining on the surrounding environment — and held meetings with “relevant stakeholders,” meaning community and civil society groups with an interest in the project.

“At this stage the results have not yet been finalized and specialist studies are in process. Any statements made on the potential impacts, negative or positive, on both the community and environment at this stage would be premature and in some cases amount to hearsay,” spokeswoman Megan Hunter said.

“Ibutho Coal is aware of the concern that the mine may result in an increase in rhino poaching activity,” the company said in a factsheet. “A Wilderness Risk Assessment will be conducted with specific attention to the aspect of increased poaching risks.”

It’s not just Hluhluwe-iMfolozi and its rhinos under threat due to the interest in South Africa’s abundant mineral reserves. A similar controversy erupted starting in 2010 when a coal mine was built next to Mapungubwe National Park, a 1,100-year-old World Heritage site along South Africa’s border with Zimbabwe and Namibia.

Following opposition from UNESCO and other groups, in July the South African Cabinet approved a new buffer zone to further protect the area around Mapungubwe, which has been deluged by prospecting and mining applications.

Sheila Berry, a coordinator with Global Environmental Trust who works with communities affected by coal mining around the Hluhluwe-iMfolozi game reserve, said that South Africa’s protected areas have been considered “fair game” for mining.

“Mining is one of the most damaging activities, and in South Africa it has a very bad record,” Berry said.

“It’s not just South Africans but all over the globe people are aware of the iMfolozi game reserve. We’re prepared to destroy a sacred place that has got immense value worldwide.”