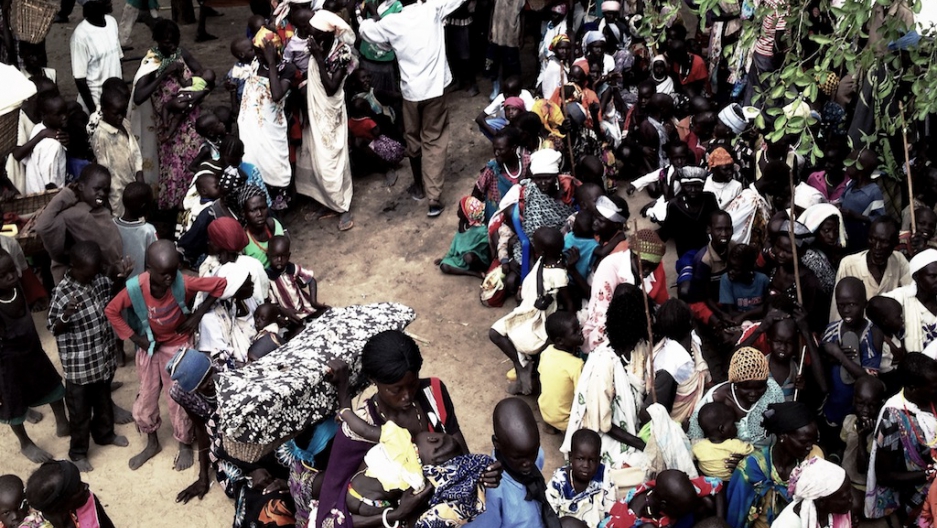 Families line up to register for emergency food and to receive immunizations in Pathai, South Sudan.
Credit: Tristan McConnell
Share

NAIROBI, Kenya — The relationship between South Sudan’s government and the rest of the world is falling apart, just when the fledgling country most needs help ending a war and saving lives.

Since a political rivalry between the president and his former deputy turned violent in mid-December, South Sudan has been mired in conflict and catastrophe.

“If we continue with this mediation it will not bring peace,” said Lueth, referring to the process led by Ethiopian chief mediator Seyoum Mesfin.

Lueth accused Britain, Norway and the United States — collectively known as “the Troika” in their support for South Sudan — of seeking “regime change” in Juba, South Sudan's capital, and even accused them of being “responsible for the beginning of the crisis.”

Lueth’s comments drew an exasperated response from diplomats involved in the talks.

“The government of South Sudan cannot continue to blame others,” said Europe’s special envoy Alex Rondos. “If they are, as they claim to be, sovereign, then they have to exercise the responsibility that’s needed to get their country back to some state of peace and reconciliation.”

Both government and rebel sides are seen as being fundamentally uninterested in the peace they are supposed to be negotiating.

Rondos told GlobalPost that both sides continued to “play at negotiating as opposed to actually negotiating” and warned that the coming dry season would likely mean a resumption of fighting. “That’s what’s really worrying because this is looming now,” he said.

The fighting has so far uprooted 1.3 million people, left 4 million hungry and killed many thousands of civilians, but there is no winner in sight.

The talks have achieved almost nothing: ceasefires have been agreed and then broken, deadlines set and then ignored. All the while those most responsible for the suffering in South Sudan have been staying at luxury hotels unable to agree during daytime sessions but happy to mingle at the bar in the evenings.

The feckless approach to talks on which the lives of millions hang has infuriated everyone outside of the warring parties. Even China, a big buyer of South Sudanese oil, has been forced to recalibrate its long-standing policy of non-interference.

More from GlobalPost: This tiny, distant village explains everything that is wrong with South Sudan right now

But the relationship between South Sudan and the rest of the world has been souring for some time.

“You are all responsible for this crisis,” said Hilde Jonson in an address aimed at the political leadership, whether government or rebel. “After decades of sacrifice and suffering you got your freedom, you got self-determination and independence. And then you turn on each other, and wasted all the goodwill and opportunities you enjoyed.”

The comments may have had more power if Johnson had not waited until she was in the departure lounge at Juba airport, on her final day in office, to speak up.

Johnson’s words were, in any case, reactive. In January Kiir accused the UN of attempting to hijack his country and Johnson of seeking to rule alongside him “as co-president of South Sudan.”

“We did not know, when the UNMISS was brought to South Sudan, they were brought as a parallel government to the government of South Sudan,” Kiir said, using the acronym for the United Nations Mission in South Sudan.

Wild rumors have been stoked and spread, including one in March mistaking gas mask canisters for land mines, and anti-UN protests have been organized in Juba.

Then in September the government announced that foreign workers, including aid workers, must be replaced by South Sudanese employees.

The directive, aiming to “protect the rights and interest of the people of South Sudan,” was met with horror, derision and some confusion as decades of civil war mean that there are few South Sudanese who have the necessary education and skills to take over from foreign workers.

Mwangi Kimenyi, senior fellow at Washington’s Brookings Institution, branded the directive “stupid” and compared it to the actions of Idi Amin who expelled tens of thousands of Asians from Uganda in 1972, triggering economic collapse.

The government quickly backtracked but the directive was a further sign of the strained relationship between South Sudan’s embattled government and the large expatriate community of humanitarian workers, diplomats, donors and businesspeople who are based in the capital.

Frustrated by stalled peace talks and the carelessness shown toward their citizens by leaders on both sides, some donors have cut aid. Most now openly describe South Sudan’s crisis as a “man-made” disaster, thus pointing the finger of blame squarely at the local leaders.

More from GlobalPost: A snapshot of South Sudan after 9 months of civil war

“This is a man-made crisis, not one caused by the vagaries of the weather, and though humanitarian aid is vital it cannot fix a political problem,” said Tariq Reibl, head of the charity Oxfam in South Sudan.

Asked if there was a breakdown in relations between South Sudan and foreign governments and organizations, Jean-Louis de Brouwer, director for humanitarian operations at the European Commission, said there is “not growing dissatisfaction” but that the Juba government has to do more.

“The first responsibility for protection of civilians lies with the state,” said Brouwer. “They accept this but it must be transferred into deeds.”

But what if the state fails to protect its people? What if it shows little or no interest in safeguarding them and is, in fact, actively involved in harming them through war?

Rather than seeking ways to solve the political crisis, end the fighting and alleviate suffering, political leaders have stalled in Addis and it is widely predicted that fighting will resume when the rains stop.

Meanwhile in Juba, the government busies itself with passing new laws restricting the activities of non-governmental organizations and granting broad powers of arrest and detention to the national intelligence agency, and trying to prevent aid agencies from issuing famine warnings (this despite the fact that Kiir himself has said famine is likely).

“The South Sudanese need to understand that not only are they responsible for the fact their citizens have been put to the sword but that with a rising wave of refugees running away from famine and fighting they are exporting insecurity,” said Rondos.

South Sudan’s crisis is “a tragic indictment of the political leadership and no one else,” he said.