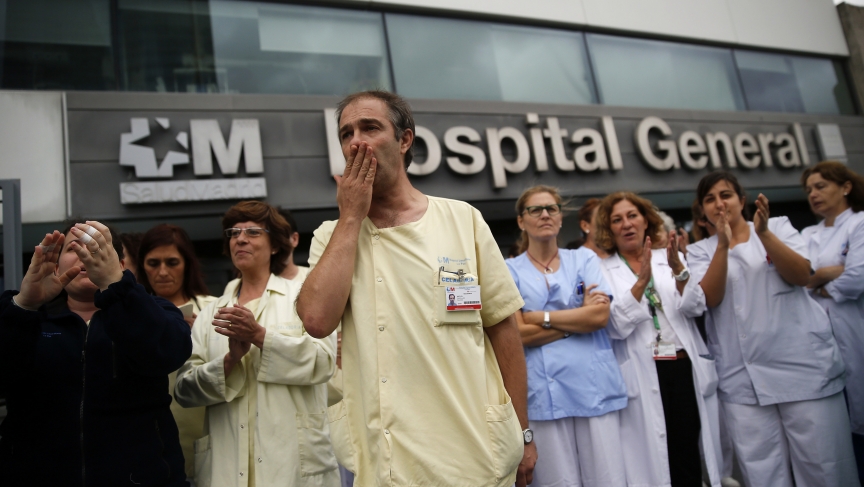 Spain is now the home of the first known case of the Ebola virus contracted outside of Africa during the current outbreak.

The infected patient, a woman who is not being named, is a Spanish nurse who was part of a team in Madrid caring for two Spanish missionaries who contracted Ebola in Sierra Leone and Liberia. Both of the missionaried died, and the nurse was placed in isolation after experiencing diarrhea and other Ebola symptoms.

Gerry Hadden, a reporter in Madrid, says "there's a lot of nervousness and concern that even in Europe, where there are better protocols to deal with these types of emergencies, that human error can occur."

The Ebola virus spreads through direct contact with the bodily fluids of an infected person, and Hadden says the nurse had collected waste from the room of one of the infected Spaniards, a priest.

The Carlos III hospital where the woman works was designated to deal with potential Ebola cases. Hadden says one wing of the hospital was set up to treat such patients and treat them. But last summer, nurses and hospital workers protested because they felt they hadn't received adequate anti-infection training.

Hadden says the "nurses and staff had received training on how to protect themselves, but not on the more complex procedures such as how to transport a patient through the public hallways or how to sterilize and clean beds or chairs where the patient sat."

The government hasn't identified where the breakdown occurred, but they have asked for the public and the media's help in allowing the investigation to proceed before "adding to the panic," says Hadden.

The European Union sent a letter to the Spanish health minister, Ana Mato, asking her to explain how the nurse contracted the disease. Hadden says members of Spain's opposition group have also called for Mato to resign.