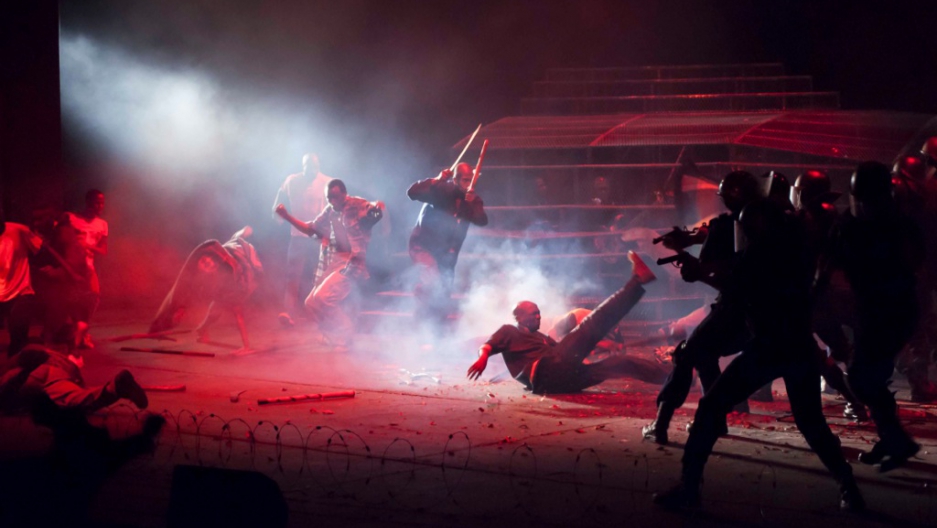 PRETORIA, South Africa — The lights went down and miners in helmets and gumboots rose up from a dark pit beneath the stage, headlamps aglow, singing a rousing song of struggle.

The packed crowd of hip young South Africans whooped and cheered. It was opening night of “Marikana: The Musical” at the country’s most stately theater, an unlikely tribute to a tragedy still fresh in the minds of many here.

Two years ago, South African police shot dead 34 striking mineworkers at the Lonmin-owned Marikana platinum mine northwest of Johannesburg. It was the bloodiest police action since the end of apartheid, and a day that shocked the nation. An official inquiry into these deaths, and 10 others during the unrest, continues.

But unusually, the Marikana story is already being staged as “living history” — as director Aubrey Sekhabi describes it — during a three-week run at the State Theater in Pretoria. Sekhabi argues that the unfinished story of Marikana needs to be told now.

“For me, it was like — this is happening during our lifetime, so do we want to wait and write it 10 years later, or do we want to do it now, so we can deal with it, we can start to engage?” Sekhabi said in an interview.

“So that we can understand what happened, and never let ourselves get to that position again where so many of us can die and we can kill each other like that.”

The audience at the gala performance responded to the mineworker characters as heroes, with the biggest cheers during choreographed dancing and fighting scenes as the miners protested for wage increases. Sappy ballads evoking the emotions of police officers, and depictions of wrangling among union leaders, were less successful.

“Skeptics have asked, ‘Why a musical?’” Sekhabi wrote in a program note, “and by this question they argue that it would be distasteful for such a tragic story to be told in the upbeat form that a stage musical implies. My answer is a simple one. During the Marikana strike, the miners expressed their frustrations, miseries and poverties through song.”

It is these haunting songs — some of them, the same ones sung during the strike at Marikana — and the stirring portrayals of miners protesting with "pangas" (machetes) and "knobkerries" (wooden clubs) that are the strongest parts of the musical.

Other evocative scenes show the men being anointed with "muti," or traditional medicine, by a healer to gain strength and protection in their battles. In songs the miners describe hard lives working for little money in difficult conditions — same as their fathers and grandfathers before them.

“All the way from our villages, to dig up the riches from the motherland for the benefit of foreign scavengers,” sang the chorus of miners. “It’s just like yesterday. Being the honeypot for the West, this past refuses to die.”

The lyrics of a song titled “Marikana” recount what happened on Aug. 16, 2012: “Live ammunition, teargas, machetes and war cries. They shot us down, we fell and died. Ma-ri-kaaaaan-aaaaaaah!”

Sekhabi based the musical on a book titled “We are going to kill each other today,” an account of the Marikana tragedy written by South African journalists who covered the story.

Vuyisile Mshudulu, 34, and a friend arrived at the theater dressed in green blankets in honor of a slain leader of the mineworkers dubbed “The Man in the Green Blanket” by local media for the one he wore knotted at one shoulder, a buffer against the South African winter cold.

“We want to attach a name and an identity to him,” Mshudulu explained. “He was a strong black leader, and his name was Mgcineni Noki.”

Mshudulu described the musical as “a good interpretation,” adding: “It is also a rehashing of the pain of what was experienced and meted out against us black people.”

A sample of song lyrics from the production:

"Panga" is another word for machete. South African State Theatre