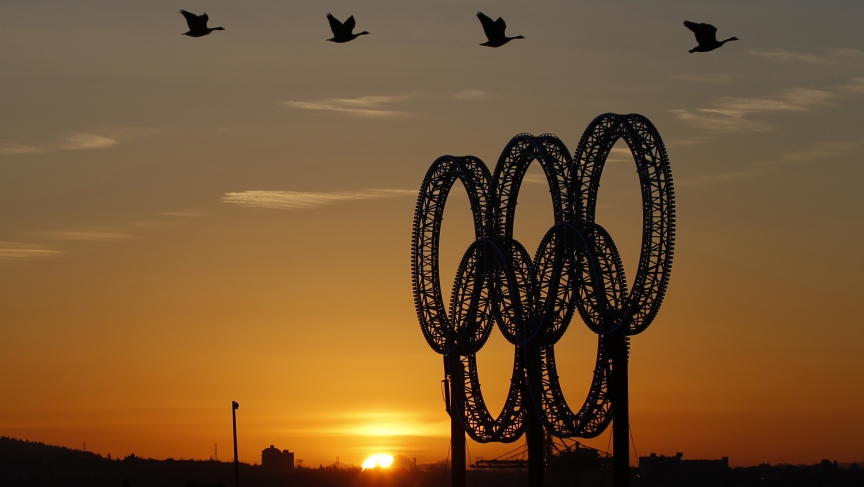 Geese pass the Olympic rings, afloat on a barge in Vancouver's harbor, one morning during the Vancouver 2010 Winter Olympics.

Oslo has dropped out of the competition to host the 2022 Winter Olympics, leaving the International Olympic Committee to choose between Beijing and Almaty, Kazakhstan, for the international games.

In the IOC evaluation, Oslo was far and away the preferred venue. It's interesting that every other city in a democractic country that was vying for the games has pulled out, too. And now, perhaps, we have an idea why.

Sure, there's the $5.4 billion price tag, reportedly half of which the IOC wanted Norway's government to pick up. But the National Post has come up with a list of "other" demands the IOC made on potential Olympic hosts. For example: "Separate lanes should be created on all roads where IOC members will travel, which are not to be used by regular people or public transportation," and "Meeting rooms shall be kept at exactly 20 degrees Celsius at all times."

And then there's our favorite: IOC members will be greeted at their hotels "with a smile." Apparently, that's required whether deserved or not.

How do you protect women in this Colombian town? Ban men from the streets

Violence against women is a problem in many parts of the world. And suggested solutions range from encouraging women to carry guns to special police to catch gropers on public transportation. But here's a strategy that might give you pause.

A Colombian city is proposing a one-night curfew on men, so women can be out on the streets without fearing for their safety.

Vice reports that the curfew in Bucaramanga is largely symbolic. There are real restrictions, and fines for violators, but the mayor of the city said the fines would be more symbolic than significant. What he is hoping is that men will voluntarily stay home, without needing to be forced to do so. The city is also encouraging bars and clubs to host women-only events. The curfew will be in effect the night of Oct. 9.

For years, restaurants, especially Chinese restaurants, have been touting their MSG-free recipes. That dates to studies in the 1960s that concluded people were getting sick from consuming MSG. It turns out, though, that the research had flaws. Now, new research is directly contradicting what those 50-year-old studies found.

PRI's Science Friday talked to several food scientists about MSG — monosodium glutamate — and how it is used in food. When MSG is used in incredibly large doses, it can cause problems for people — as can many common foods. But the main components of MSG, sodium and glutamate, are common parts of the human diet. The new research suggests people don't need to worry about MSG, unless, of course, they are allergic to it.

India's female police squads strike back at men who harass

India has a bad reputation for the way women are treated in public, especially on public transportation. They are often harassed, groped and otherwise assaulted by men in the community. Now, the government is creating a police unit comprised entirely of women to take on these male offenders directly.

Vocativ reports on the new anti-pervert police — policewomen who will patrol the city's subways undercover, ready to attack men who assault or harass women. In particular, they'll focus their attention on the women-only subway cars the government introduced last year  — which are often taken by men anyway. In several videos, you can see how the new police force isn't merely arresting or writing citations on these men, they're literally striking back.

These UN peacekeepers sexually abused a disabled boy. And all they got was a slap on the wrist

United Nations peacekeepers have been stationed in Haiti since 2004 to protect law and order and help people in the impoverished and disaster-stricken country. And, no doubt, most of the peacekeepers do just that. But PRI's The World has a disturbing story about Pakistani peacekeepers who were convicted of sexually assaulting a disabled boy. Repeatedly.

And while the story is outrageous, what is equally outrageous is that the offenders were essentially above conviction. UN peacekeepers, by international law, are subject to the jurisdiction of their home countries, not the jurisdiction where they are stationed or where they commit a crime. In this case, the Pakistani government elected to punish the peacekeepers with a dishonorable discharge. One was subjected to a year in prison.

It's been a rough weather season for residents of Baja California in Mexico. And it doesn't seem like things are going to get any better anytime soon. Tropical Storm Simon formed Thursday morning with the potential to reach hurricane strength in the days ahead. It's expected to head out to sea before curving back toward Baja California. the western-most Mexican state. The storm is expected to bring rain and winds to the peninsula over the next few days, but not make actual landfall until sometime next week, according to AccuWeather.