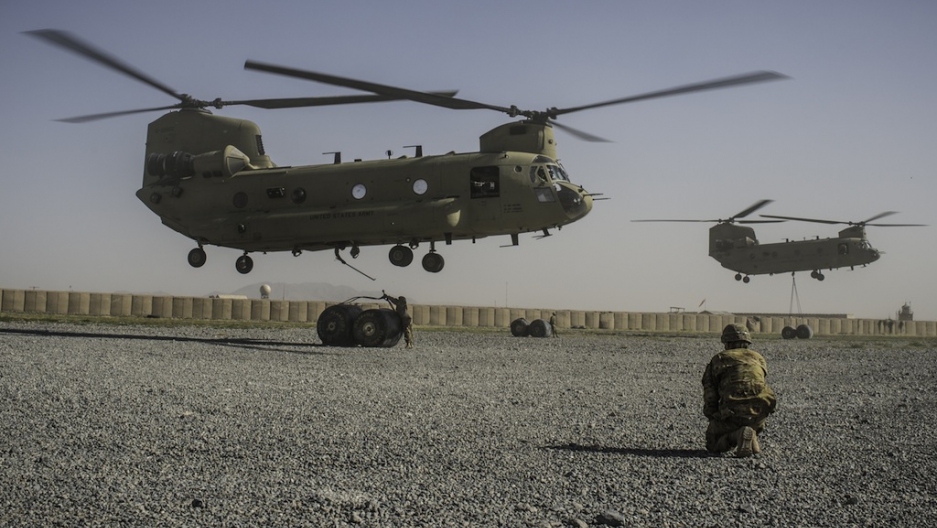 Deep into the drawdown, fuel is no longer distributed to smaller bases by road — it is too dangerous and there aren't enough trucks. Two Chinooks at Kandahar Airfield prepare to deliver fuel containers to a small contingent of troops at FOB Apache in neighboring Zabul Province.
Credit: Ben Brody
Share

KANDAHAR, Afghanistan — In ten years of covering the American military at war in Iraq and Afghanistan, I’ve become pretty used to the avalanche of Orwellian strategic messaging that comes with an embed. “Good news” is highlighted and discussed without context or sense of irony, “bad news” is excluded.

This last trip to Afghanistan was different. I was primarily there to cover the mechanics of the drawdown of troops, so of course the drawdown itself was presented as running along pretty smoothly. Fair enough. But this time there was no attempt to put the current mission into the larger context of a successful endgame. Even the military’s own messaging experts won’t touch a conclusion that absurd.

Iraq was always more saturated with strategic spin than Afghanistan, and no amount of unbridled optimism was ever considered unseemly or naive in the military’s eyes. I’ll never forget when a brigade commander told me that he expected his 4,000 soldiers to control Baghdad so thoroughly that no additional troops would be necessary at the end of his tour.

This was in January 2005, the insurgency in full swing, Sadr City boiling over. As the cradle of civilization burned, his media embeds were shown pointless construction projects and soldiers handing out Beanie Babies to children.

In Afghanistan, embedded reporters have been typically given more free rein, particularly during the 2009-2012 troop surge. At that time, it was easy to get to an isolated combat outpost and patrol alongside ground troops for weeks at a time. That brings its own editorial challenges, as reporters are expected to bond with troops through shared hardship, gradually nudging war coverage toward the positive. A battle-damaged pickup truck is stripped for parts at Bagram Airfield.  (Ben Brody/GlobalPost)

Certainly, the story of the American war in Afghanistan has its positive aspects, but you can’t accurately tell the story of building a school for girls without putting it in the context of its tenuous lease on life and impending collapse.

As US troops leave their combat outposts, the Taliban is resurgent in a few key places and the Afghan Army is hard pressed in Helmand, the poppy-growing capital. Kabul is more dangerous for foreigners than ever, due to a new Taliban strategy of opportunistic assassinations. A few weeks ago, a US soldier momentarily stepped out of his armored truck to help a Kabul police officer direct traffic.

A Taliban fighter who happened to be nearby seized the moment, and stabbed the soldier to death before fleeing on a motorcycle.

Whether or not the Afghan Army can hold their ground against the Taliban in the Pashtun south, electricity is about to become a serious problem there with USAID’s failure to move the Kajaki Dam hydroelectric project forward. Kandahar City could be essentially without electricity from 2015 to 2018, according to the US military’s best-case-scenario projections.

The Taliban’s murderous goals and the continuing debacle of Kajaki, however, are relatively minor problems compared with the makings of a civil war that have been brewing over the presidential election. Afghanistan has been in a state of political and economic paralysis for the last ten months, as a tainted election threatens to draw at least four northern provinces into open rebellion against the central government.

The makeshift power-sharing solution, with Ashraf Ghani named president and his rival Abdullah Abdullah as chief executive, is a tenuous arrangement at best. Both men have different visions for Afghanistan, and it’s hard to imagine an era of compromise and consensus springing forth in Kabul.

Many soldiers and airmen I spoke with casually — at the chow hall, at the bazaar, waiting at the flight line — said they felt conflicted about the drawdown. They all see Afghanistan quickly descending into chaos as the Americans leave, perhaps even before, however they disagree about whether 50 or more years of occupation would fundamentally change anything about the place for the better.

“It’s rewarding to be able to say that we’re helping get NATO home,” said Maj. Chris Carmichael, whose unit is responsible for shipping the bulk of military equipment from Bagram Airfield to the United States. “But in my own opinion, we need to be here another 50 to 70 years. Look at South Korea and how they’re a major economic powerhouse now. How can you change a whole culture in 10 years?”

After 13 years of war, you’d be hard pressed to find a soldier who believes that a few more years of boots on the ground in Afghanistan would put the country on the road to stability, much less prosperity. Of course many young soldiers want to go out and fight there anyway, but that is not because they believe in the larger strategic gambit. Combat is the central rite of passage in America’s all-volunteer military culture, and an entire generation of soldiers before them have had that experience.

One clear winner has emerged from the murky, indecisive conflict in Afghanistan: the companies employing military contractors. Troop levels are a bit misleading, as they do not prescribe the number of contractors on the ground. At the end of 2014, Bagram Airfield will house approximately 5,000 troops, and 10,000 contractors.

President Ghani has signed a deal that permits 9,800 US soldiers to remain in Afghanistan after 2014, but soldiers already there say that number is arbitrary and that the military will hire as many contractors as they need to in order to accomplish the missions they prioritize.

Bagram Airfield is the nerve center for the military drawdown in Afghanistan, and the place where the most US troops will be stationed after 2014. The mechanics and machinery of the drawdown are impressive. The new hardened US headquarters buildings have an amazingly solid, imperious feel to them, as though they are meant to last forever as monuments to an occupation that transformed Afghanistan for the better.

They also feel more sterile than a building in Afghanistan has any right to be, insulated from both Taliban rockets and from the reality of the continuing conflict — as well as the country’s history as the graveyard of empires. The crumbling Soviet office buildings and aircraft hangars next door probably felt the same way 30 years ago.