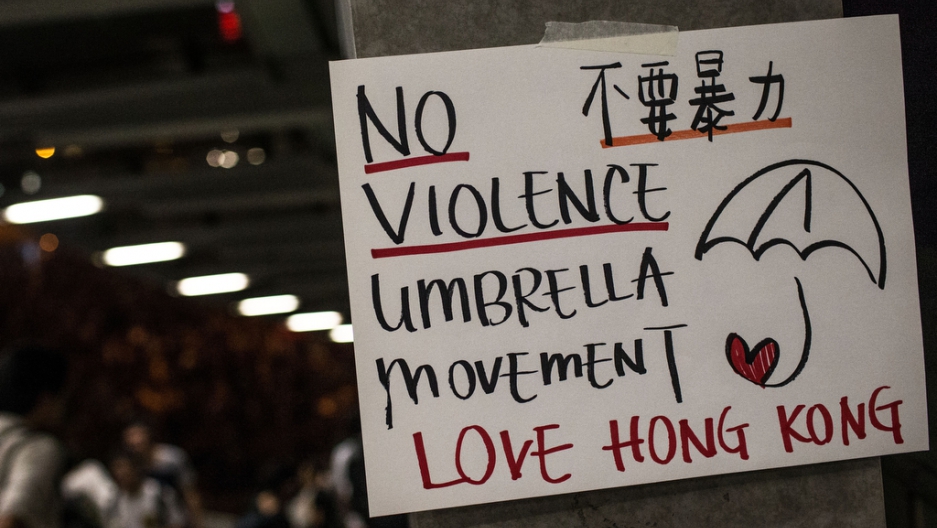 Chinese state-owned media has described the thousands of pro-democracy protesters camped on the streets of Hong Kong as “extremists” and "radical."

Well, they would say that.

But after examining dozens of photos of protesters posted on social media networks and elsewhere, we realized they had a point. These guys are extremists, as in extremely clean, polite, generous and orderly.

Just look at these protesters diligently cleaning up after themselves, even taking the time to remove the tops from plastic bottles so they can be recycled efficiently.

Many of the young protesters have been on the streets for days demanding full democracy in leadership elections in 2017. Volunteers are distributing buns, chocolate, bananas and bottles of water to keep them fed and hydrated.

Islands of supply - food, water and protective gears - for participants at #OccupyCentral pic.twitter.com/Cm9UJK0YCf

Such is the determination to keep this protest movement clean, participants are turning banana skins into an organic cleaning fluid. Seriously.

These guys are making organic cleaning fluid out of decomposing bananas #occupyhongkong pic.twitter.com/fnoUFhRAt2

Some protesters haven’t changed their clothes for days so this girl is kindly offering to freshen up stinky t-shirts.

When thousands of people take over the center of a city the size of Hong Kong, transport and local businesses are bound to be disrupted. The protesters have sincerely apologized for any inconvenience they have caused.

A very polite note from a protester in Mongkok. pic.twitter.com/314yeVcUOj

Peace-loving demonstrators have even said sorry to the police when one of their own has stepped out of line.

This was on a vandalised police van in Admiralty today pic.twitter.com/sSiTI3kaMw

Graffiti is not tolerated either.

#OccupyCentral removing graffiti from the side of the road. pic.twitter.com/pf8dqI9wO1

Many school students have joined the growing protest movement. But just because you are protesting for democracy doesn’t mean you don’t have to do your homework.

Hong Kong students are starting to do their homework while occupying. pic.twitter.com/HJzk1l8cue

School kids do their homework in the streets at Hong Kong protest pic.twitter.com/pZXkDOaSTp

When protesters aren't using their now iconic umbrellas to shield themselves from tear gas, torrential rain or the burning sun, they hang them neatly on a fence.

Hong Kong is hot right now, with temperatures reaching 90 degrees Fahrenheit during the day. These people are doing what they can to keep protesters cool.

Demonstrators create a lane for an ambulance to drive through.

Even when demonstrating, Hong Kong protesters still obey signs to keep off the grass.