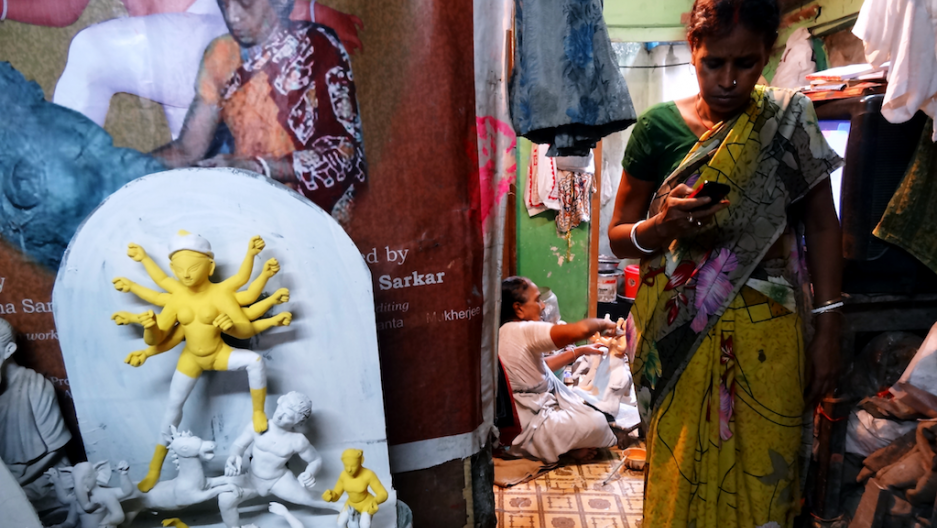 Mala Pal tries to reach out to a money lender over the phone, from her working shed in Kumortuli, Kolkata, India. The idol made for a German client stands to her right.
Credit: Priyanka Borpujari
Share

KOLKATA, India — Fall in India brings with it the festivity of the goddess Durga among Hindus, who observe the triumph of goodness over evil. Several states in eastern India surrender to a 10-day frenzy, whereby large idols of the goddess are put up in mammoth tents.

Thousands flock to seek her blessings and to marvel at the detailed art work of the idols. In the eastern Indian metropolis of Kolkata, once known as Calcutta, Durga Puja is celebrated with utmost pomp. However, it is only in recent times that women artisans are foraying into the male-dominated sphere of making the idols.

Mala Pal, 34, learned the art of making sculptures from her father and brother. The walls in her workshop are layered with photographs of her honors — she has won several state and district level prizes for her creations. She points out to one idol in progress, about two feet tall, which she says has been bought by a buyer in Germany for 22,000 rupees (about $350). Her aging mother Maya assists her in painting the delicate limbs.

"Girls are usually not taught this work as it is laborious, but I began to work when I was 14. My father was very encouraging, and so is my husband," she says, adding that she is teaching her daughter this work.

Mala works four months a year at the shed in the potters’ quarter of Kumortuli and the rest of the year is spent working in other places. Currently, she has taken leave from working in the central Indian state of Chhattisgarh, where she is part of a team that is constructing a 35-foot statue of the Hindu monkey god Hanuman.

“When I begin to make the idols, I am concerned about perfection. After it is complete, I see a goddess in full form,” Mala says, smiling brightly.

After what can be months of work for larger idols, the artisans are often known to feel melancholic when the idols are taken away by their respective buyers to head to the tents. To the artisans, it is a farewell from the goddess, whom they have created with their bare hands.

Yet, “the goddess visits us again,” they say.

It was in the late 1700s that the British East India Company set up districts for different artisans in northern Kolkata. The potters residing in Kumortuli, in the vicinity of the Hooghly River, slowly took to making idols of gods and goddesses, and eventually began to supply the idols to different parts of the country. Today, these idols — made in their sheds of bamboo and mud — are also ordered by Bengali associations around the world, particularly in North America.

Kumortuli Mritshilpo Sanskriti Samiti (Kumortuli Clay Art Cultural Committee) was formed about 50 years ago, to bring together the artisans under a singular platform to bargain collectively for any assistance they might need to pursue their work for the festival season. It is one of three similar committees.

The Samiti initially had the names of 124 artisans, but later, every artisan added the name of his assistants and family members who were involved in the work. Today, there are about 3,000 artisans living and working in Kumortuli. While the original Samiti membership lists just four women, there are more women doing the work today, albeit not all of them in the primary work of making the idols.

After her husband's demise a decade ago, Kakoli Pal, 38, was forced to make idols for a living. Before his death, she would assist him in his work. During the festive season, she hires two men to assist her. Unlike Mala, she has a small and local clientele, enough to keep her afloat through the year. Today, her teenage daughters are studying in good schools and assist her sometimes.

"But I want them to study and do better in life," Kakoli says.

But conservative notions about the role of women in society persist here.

According to Ranjit Sarkar, joint secretary of the Samiti, the few women who make the clay idols are doing it under duress, and should instead focus on traditionally female jobs.

"The women make the food and clean up the place. That is an important work. But if the woman begins to make sculptures, who would do the cooking? Some women have the talent, but often their circumstances push them to take up the work head-on," he says.

Another woman artisan, Chaina Pal, took up the work because she was her parents' only child, and thus the only heir to her father's skills. But not all of the artisans' children are interested in their parents'  work, despite their acclaim.

Sarkar's 18-year-old son paints with him sometimes, but his daughter, who is doing her undergraduate studies, is not keen on learning the art.

"The new generation does not want to take up the job. They see how it is a work of immense hard work, and often, an artisan whose work does not sell, falls into a debt cycle.  Who will pick up this art after us? We are worried about the art dying," he rues.

Mala's concerns, however, belie the prospective death of the art.

“I have clients from different countries and have managed to make myself very comfortable,” she says. “But this is not the same for everyone here. Most people working here also live here, and it is not comfortable. They need better living conditions.”