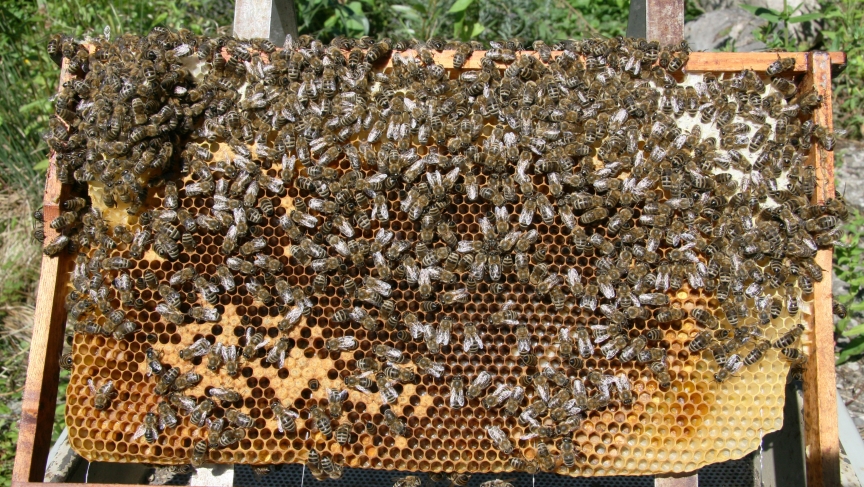 Colonies of honeybees have been dying off for no apparent reason over the past seven years.
Credit:

Seven years ago, scientists became alarmed when whole honey bee colonies would suddenly die off — and it was happening at an alarming rate.

At the time, beekeepers began to report that the adult bee populations within a colony would suddenly disappear. In all cases, few adult worker bees were found in or near the colonies. This phenomenon became known as Colony Collapse Disorder.

While worker bees would disappear, the queen and young bees would remain in the hive, which was left with, in many cases, an abundance of honey and pollen reserves. But hives cannot sustain themselves without worker bees. But a new story from the Retro Report reveals that the disorder — and its impact — is much more complicated than meets the eye.

“Bees have this behavior called altruistic suicide,” former Pennsylvania State Apiarist Dennis vanEngelsdorp says. “What happens is a bee somehow knows she is sick and flies away so she doesn't infect her nest mates. So we think that explains this behavior of collapse — why we're not finding dead bees and why we see this quick spiral down in population."

Though scientists have been studying the disorder for the last several years, it continues to be a mystery.

“There’s not any one particular thing we can pin it on,” says Retro Report producer Joshua Fisher. “That was the idea early on — that there was some sort of novel pathogen out there that might be causing this mysterious disappearance. But [the conclusion] scientists have really come to is that it’s lots of different factors working together in ways that they still don’t entirely understand.”

According to Jeffrey Pettis, a bee research scientist with the US Department of Agriculture (USDA), there are a variety of reasons that we are losing colonies, and it’s not just this particular disorder.

“We haven't seen as much CCD over the past few years, and the classic symptoms of CCD have changed or disappeared, but we're still losing a lot of colonies,” Pettis says. “That can be for a variety of reasons — parasitic varroa mite, pesticide exposure, poor nutrition, nutritional stress, and in particular we’ve been seeing a lot of queen loss.”

Pettis says the USDA is conducting research on queen bees that may help shed light on Colony Collapse Disorder and other ailments impacting bee populations.

“The varroa mite is definitely probably the biggest issue facing beekeepers today, but that does not necessarily mean that it’s the cause of the colony collapse,” Fisher says. “There’s been a lot of confusion. ... It’s kind of became this catch all phrase referring to any time a bee colony died.” Fisher says CCD is a very specific kind of death, adding that a death from an infestation of the varroa mite parasite is quite different.

For many beekeepers, CCD has presented difficult challenges.

“We're buying bees to keep our heads above water,” says Dave Hackenberg, a commercial beekeeper. “It's not the basic beekeeping that I remember as a kid and as a young guy running bees. There’s a whole lot of things that have changed. There's a lot of days I'd like to pull the plug and walk away. But I like what I’m doing — it's something that gets in your system and doesn't go away.”

This report was produced in collaboration with Retro Report. See a video of their findings, below: