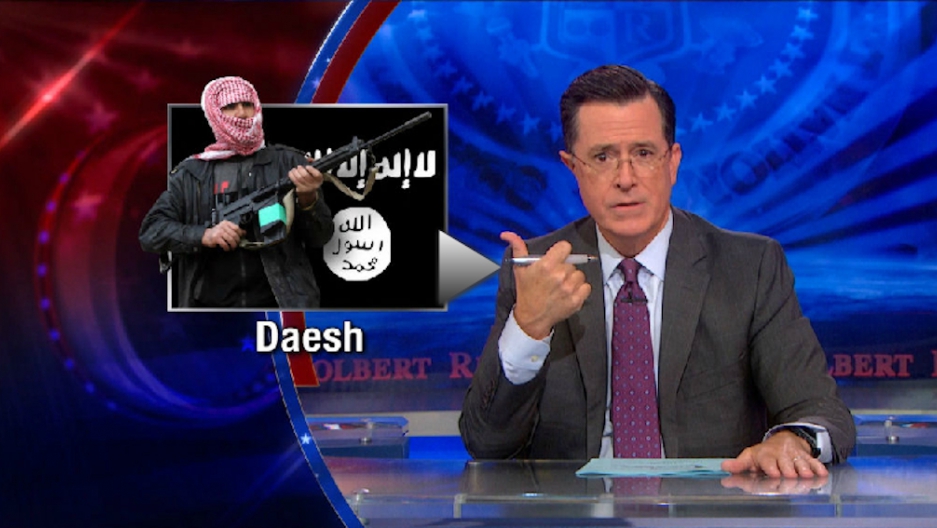 A still from a recent episode of Comedy Central's Colbert Report.
Share

Worried about the latest round of hostilities in the Middle East? No problem — just kick back and tune in to “The Daily Show with Jon Stewart,” which can make you forget, just for a few minutes, how miserable everything is.

America’s new military campaign in Syria is “the iPhone 6 of wars,” Stewart gushed Tuesday night. “So anticipated … It's expensive, a little bigger, a little more unwieldy than you thought it was going to be … It's going to be at least a two-year commitment.”

And, he added, “It kinda feels like you just f*cking got the last one.”

With war in Iraq and Syria, Ebola in Africa, and hopeless partisan gridlock at home, it’s no wonder Americans are looking for escape. Humor provides some welcome relief, although there’s often a bitter aftertaste to the gags.

Fans of a certain boy band were not at all amused at what they perceived as a slight to one of their own. The Twitterverse exploded with outrage when Daily Show regular Jessica Williams ridiculed the hysteria over the multiplicity of strange new terror groups.

After detailing such fearsome gatherings as “Al Qil U’Al” and “Al Fa’aq U Ab,” she goes on to describe the baddest, “superest” team of all:

“Just as you were talking, a new terrorist group has formed, with one member each from ISIS, Al Nusra, Al Qaeda, Hamas, One Direction and the Zetas drug cartel."

For those not in the know, One Direction member Zayn Malik, heartthrob of teens everywhere, is Muslim, and his protectors felt that the skit unfairly branded him a terrorist.

In a plea for tolerance and peace, one outraged fan tweeted:

“The daily show should know better than to not make stupid disgusting racist jokes about zayn im going to kill.”

Perhaps irony and humor are not a Directioner strong suit.

More from GlobalPost: 5 questions we should be asking about this Syria operation

Stewart was not the only one trying to make light of the war, of course.

Stephen Colbert got a few licks in as well, expressing delight at the outbreak of hostilities, since he could now punch a new hole in his “Mideast frequent bombing card.”

“All we need to do is bomb Oman and I get a free falafel,” he said.

Even those whose mission is not primarily comedy can bring a smile to the face — or maybe it’s more of a wince.

Fox News, for example, was eager to gladden the hearts of feminists everywhere by touting the accomplishments of Mariam al-Mansouri, the United Arab Emirates’ first and only female pilot, who has been taking part in the bombing raids on Syria.

“After she bombed it, she couldn’t park it,” Greg Gutfeld cracked, prompting the equally neanderthal Eric Bolling to ask, “Is this what you call ‘boobs on the ground’?”

Colbert decimated the pair with his own riff, upbraiding the “the cocks on Fox” for their lack of respect, and slyly equating their drivel with the “oppressive and narrow-minded view of women” expressed by the extremist Islamic State.

After praising the pilot for giving “hope to other intelligent and capable women who right at this moment may be suffering halfway around the world,” Colbert flashed to a shot of Fox’s Kimberly Guilfoyle, cringing at Bolling’s comment.

The staid and sophisticated New Yorker magazine is also getting in on the act, with satirist Andy Borowitz skewering Syria, the Bush administration and Fox News in one outrageous mix.

“In a Thursday appearance on the Fox News Channel, former Vice President Dick Cheney said that it was ‘no fair‘ that President Obama gets to bomb Syria. ‘I’m envious as hell,’ he told Fox’s Sean Hannity. ‘That was on my bucket list,’” the satirist wrote.

Borowitz also made light of the nation’s new enthusiasm for war, with his post: “Americans Who Have Not Read a Single Article About Syria Strongly Support Bombing It.”

Late night comedian Seth Myers just had to pitch in, with a Q&A in which he asks and answers a series of provocative questions, such as “Did we just go to war last night?” or “What is a moderate rebel?”

The answers, needless to say, are barbed: A “moderate rebel” is some who “is a rebel on the weekends, like a wind-surfing enthusiast or a foodie.”

In answer to “Do we really think the moderate rebels can stop ISIS?” Myers laughs and says, “No, but it’s a nice thing to say.”

In June he broke new ground with a piece on Syrian President Bashar al-Assad, who, we learn, has been caught downloading Western pop music from iTunes. One of his favorites turns out to be a song by the British band Right Said Fred.

Picture, if you can, Assad humming “I’m too sexy for my shirt” as he struts his stuff on the catwalk.

Oliver invited the musical group to New York to reprise their 1992 hit, especially tailored to Assad. The audience was ecstatic, even if the band members were a bit less sexy this time around.

A quick trip through the internet shows just how long humorists have been milking the Syria conflict. Files of jokes, memes, cartoons and tropes about Syria have been accumulating for months and, depressingly enough, most of the time it’s impossible to tell the new ones from the old.

A tweet by shoe designer Kenneth Cole seems particularly apropos, until one realizes it was from last September, not this one:

"Boots on the ground" or not, let's not forget about sandals, pumps and loafers. #Footwear

Then there’s this gem from Jay Leno:

”On Tuesday President Obama is planning to address the nation. Instead of calling his plan to attack Syria ‘a war,’ he is calling it a ‘limited military intervention’ — which sounds better than ‘potential endless quagmire.’”