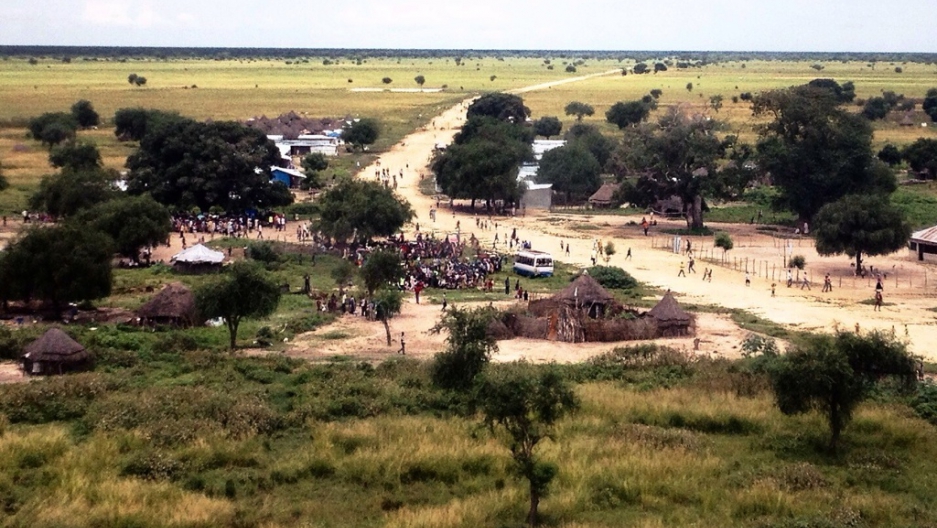 People gather in Pathai, South Sudan as aid workers arrive, the first to reach the remote area in the nine-months since the civil war began.
Credit: Tristan McConnell
Share

PATHAI, South Sudan — Some of the remotest parts of South Sudan are now also the safest. But that isolation, which protects people from an ongoing conflict, also separates them from the help they need to survive.

One such place is the village of Pathai, located in a rebel-held expanse of Jonglei State in the east of the country, far from roads or towns.

There are a handful of tin-roofed buildings among the thatched huts, and a metal shipping container repurposed as a prison. Except for a jumble of broken down vehicles, there’s not much else. Pathai is a week’s walk from the nearest major town, yet it is heaving with people.

Thousands streamed into the village last week, walking for days across swamps and grass plains in the hope of food and basic medical care delivered by a small team of aid workers. They had to helicopter into the settlement because there are neither roads nor even an airstrip connecting it to the rest of the country.

South Sudan's new civil war started in December. A political dispute quickly turned into a tribal conflict and, less than three years after it won independence, the civil war has Balkanized the new nation. Since fighting broke out, some parts of the country have been effectively cut-off. Persistent fighting has ravaged others. Frontlines have severed roads and rivers bringing trade to a halt. People forced to flee their homes with nothing have no crops to plant. The communities hosting the displaced, largely spared the direct impact of the war itself, shared what they had until stores ran out.

In Pathai, government salaries and resupplies stopped so schools and medical clinics have shut down. Two of the four wells in the area are broken and spare parts cannot be found.

Local administrators say 14,000 people fled the towns of Bor and Malakal to the relative safety of Pathai, increasing the local population by a half. Among them was 25-year-old Nyakuoth Banyuot, who clutched the youngest of her four children, a 13-month-old baby boy, to her chest.

She escaped Bor, which sits on the eastern bank of the Nile, when fighting erupted in December. She is an ethnic Nuer, like former vice president turned rebel leader Riek Machar. His enemy, current South Sudan President Salva Kiir is a Dinka. So Banyuot’s enemies are also now the Dinka. Here in Pathai, she is surrounded by her fellow Nuer.

“I left Bor with nothing. Only my children and the clothes I am wearing,” Banyuot said. “We have nothing. No food, no water, not even a blanket.”

In March, Banyuot walked for two weeks to reach the safety of her relatives’ village. On Friday, she walked again — for three hours — to reach a plastic table set beneath the spreading branches of a shady tree in Pathai where whole families were registering for emergency rations from the World Food Program.

Next to them, UN Children’s Fund (UNICEF) workers immunized children against polio and measles, checked them for signs of malnutrition and took the details of those who were separated from their families in the fighting. Families line up to register for emergency food and to receive immunizations in Pathai, South Sudan. Tristan McConnell/GlobalPost

A widely predicted famine was averted in recent months after food was air dropped across areas of the country most affected by the conflict. But a poor harvest is expected, and aid agencies warn the threat of famine has receded, not vanished.

“Famine was prevented temporarily,” said Jean-Louis de Brouwer, director for humanitarian operations at the European Commission. But he warned that the situation remained “dire.”

“This is not a natural disaster, this is a manmade disaster,” he said. “Humanitarian aid is not the solution to this political crisis.”

But while peace talks in Addis Ababa continue to make negligible progress, and South Sudan’s leaders continue to ignore the needs of their own people, humanitarian aid is essential to saving lives.

Quantifying South Sudan’s crisis throws up seemingly impossible numbers: 1.3 million uprooted, 4 million hungry and 10,000 dead (this figure has not been updated since April and fighting has continued, so it’s like much higher).

“Life is difficult in South Sudan but it’s got a whole lot worse as a result of the ongoing crisis,” said Jonathan Veitch, the head of UNICEF in South Sudan.

When the first aid workers to reach Pathai in nine months arrived, thousands quickly gathered, clamoring for help. On one day alone 2,700 people were registered for emergency food, more than 600 children were vaccinated and four cases of malnutrition identified. Within four days 15,700 had registered.

Among those waiting for help was Elizabeth Nyachang, 45. She had lived a relatively prosperous life in Malakal in the north of the country working for a government radio station and earning a regular salary. She had a small home with three rooms, a television, a fridge, sitting room furniture and a car.

The new war took it all away, leaving her and her seven children destitute and dependent on the kindness of strangers. “I have to start from nothing,” she said.