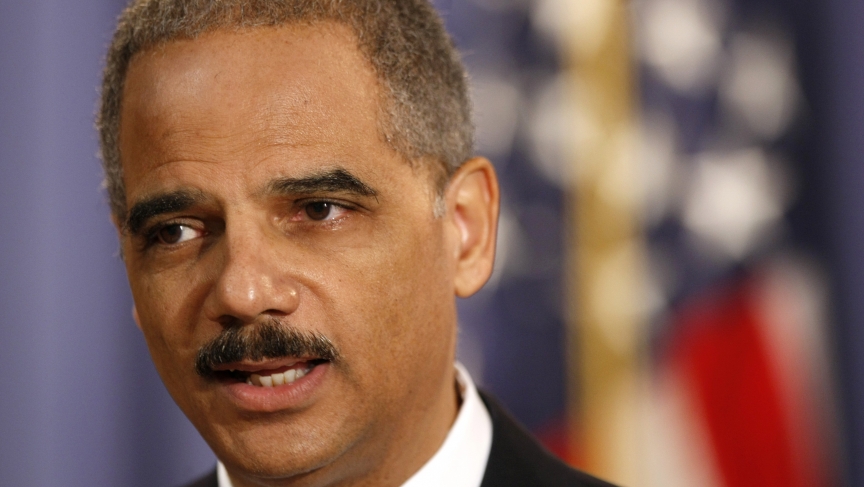 In Novemeber of 2009, Eric Holder announced that the accused mastermind of the September 11th attacks, and four other top terrorism suspects held at Guantanamo Bay, would be prosecuted in criminal courts.
Credit:

Thursday, Attorney General Eric Holder annnounced he will step down after almost six years of service. He was the first African-American to hold the nation's top law enforcement position, but his legacy will be equally defined by controversial decisions on national security issues.

While there was no indication that Holder's resignation was imminent, he had previously hinted he might leave the post by the year’s end. Holder will officially resign once President Obama has found a replacement, but there are no indications when that decision might come.

Holder was a notable, but unsuccessful advocate of moving military-run trials of Guantanamo Bay inmates into American domestic courts. “He has made clear that we can use ordinary law enforcement tools to bring terrorists to justice, and often more effectively than through the military justice system,” says David Cole, a professor at Georgetown University Law Center.

But under Holder, the Justice Department also took a hard line against leaks and other disclosures of information it deemed sensitive, including targeting the journalists who reported them. Cole also gives Holder’s Justice Department some poor grades for the techniques it used to identify potential terrorists.

“We see a number … of cases where FBI agents found a young man — often somewhat vulnerable man — and encouraged and solicited and prodded and eventually got him to agree to some sort of terrorist plot that was of the government’s devise,” he explains.

“Those are very troublesome cases. They are driven by this desire to prevent another terrorist attack — by the realization that we don’t know where that attack might come from. But I think those cases continue to demonstrate a kind of over-reliance on a preventive model that, I think, has created as many terrorist plots than it has disrupted actual terrorist plots," Cole argues.

With the US opening up a new war against ISIS in Iraq and Syria, Holder’s replacement will be faced with a series of national security challenges. But Cole says these cannot be solved by the Attorney General alone. “He’s just once voice in the room. I don’t think he can possibly turn it around on his own,” Cole says.

But Cole thinks Holder’s most lasting contribution will be his effort to change how the justice system handle crimes committed here in the United States. This year, for the first time in decades, the US saw a decline in its federal prison population.

“What [Holder] has done is take on this very unfortunate reality that the United States is the world’s leader in incarceration,” Cole says. “I think this is what Eric Holder’s legacy will ultimately be. On the matter of criminal justice reform, he has been the most progressive, most forward-thinking attorney general that we have seen in living memory."

Holder accomplished this by pushing for state-specific reforms to curb reliance on incarceration, and by directing federal prosecutors not to charge low-level drug offenders with maximum prison sentences.

“I don’t think it’s an accident that you have an African-American Attorney General … saying, ‘Wait a minute — we have to do something differently,’” Cole says.

Overall, Cole adds, “I think he’s faced a lot of very serious challenges as attorney general, but I think his heart has always been in the right place.”