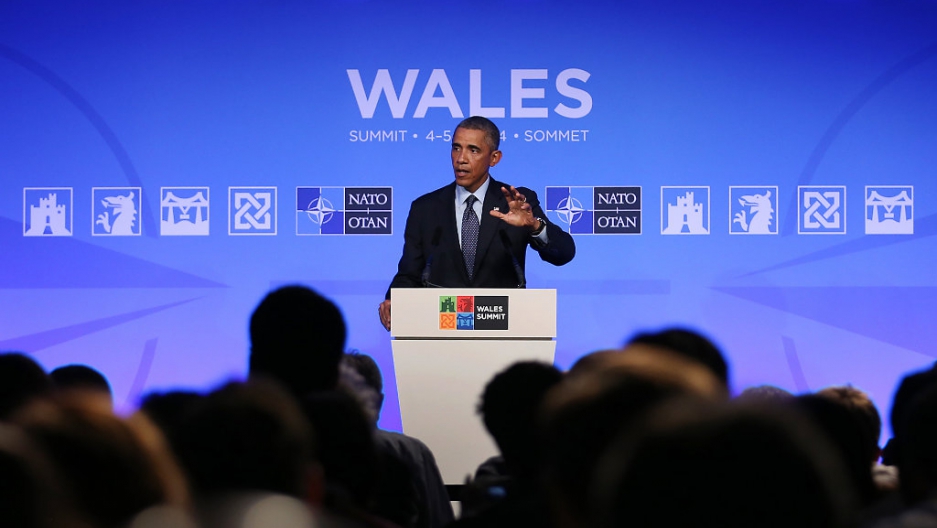 NEWPORT, WALES -- US President Barack Obama talks to reporters at the end of the NATO Summit on Sept. 5, 2014. Leaders and senior ministers from around 60 countries attended the two-day summit, with Afghanistan and Ukraine at the top of the agenda.
Credit: Peter Macdiarmid
Share

WARSAW, Poland — The NATO summit in Wales this month was planned to tell a success story about the alliance’s engagement in Afghanistan; a historic moment after more than a decade in Central Asia and the ongoing troop drawdown from the country.

Russia’s actions in Ukraine, however, challenged the security architecture in Europe and forced NATO to change the summit’s priorities. Although not a present danger, terrorist threats both in Afghanistan and across Central Asia remain a worry for the international community and for local governments.

The post 9/11 campaign against the Taliban has highlighted the role of the Central Asian regimes in the global war on terror. The five post-Soviet countries were a strategic part of the Afghanistan theatre. Kyrgyzstan and Uzbekistan allowed the US Army to use its military facilities, greatly alarming Russia. Two major air bases, Karshi-Khanabad and the Manas Transit Center, served as operational hubs. NATO forces, mainly French and German, operated out of the Dushanbe and Termez airports. In addition, NATO had transit and refueling arrangements with Turkmenistan, Kazakhstan and Tajikistan.

Providing assistance to a NATO mission was not a charitable gesture. The region’s governments secured tens of millions of dollars in military aid, rents and credits. Between 1992 and 2010, the United States alone spent nearly $6 billion to aid Central Asia. Security-related expenses amounted to one-fifth of this amount. Local regimes knew exactly how to make the most of these economic, security and political deals.

Local governments have serious concerns that once Western security assistance is gone, Central Asian Islamic extremists now fighting in Afghanistan and Pakistan may have a free hand to come back to their homelands. It is believed that a few hundred were trained in combat and are actively involved in operations against the International Security Assistance Force and Afghan forces.

The threat is real, but it should not be overestimated. A spillover effect of terrorism is difficult to verify at this stage. Terrorist incidents in Central Asia, in comparison to other regions, are few. Since 2000, the Middle East and South Asia have experienced about 20,000 attacks each, while in Central Asia it was less than 100. The influx of Islamic militants will not be a decisive factor leading to further instability in the region.

The approach of the Central Asian governments toward terrorism is striking. Widespread alarms of danger offer a range of possibilities to crack down on opponents, whether radicals, opposition or unfriendly media.

In recent years, the regimes have been implementing laws to counter terrorism. In Kazakhstan, new legislation includes criminalization of agitation and obligatory registration of all religious groups. Dushanbe prohibits children under 18 and women from attending mosques. Turkmenistan both sponsors and controls official Muslim clergy, leaving no room for extreme behaviors. Finally, Islam Karimov, a long-serving president of Uzbekistan, holds monopoly over religious publications.

While measures to combat terrorism are inadequate, the oppressive nature of the regimes in Central Asia should be taken into account. Political opposition and religious groups have been stifled from the very beginning of their independence. Now, such restrictions are in the name of war on terrorism.

Putting aside the scope of the threat, Central Asia’s authorities face a task for which they are not fully prepared. The countries share similar obstacles while dealing with the problem.

The agencies in charge of counter-terrorism are typically inefficient. They lack equipment and specialized training. Corruption is present even, or in this case especially, among the top management. In 2013, a Turkmen head of the state border service was dismissed being accused of bribery.

Central Asia is itself unstable and fragile. Ethnic complexity, social and economic discrepancies within countries, regional tensions over borders and water, pervasive corruption, as well as patrimonial and political regimes lusting for private gain, create an explosive mixture.

The US withdrawal from Afghanistan could open a window of opportunities for the Central Asian extremists, adding another piece to a regional mosaic. It is not clear to what extent they would be able to destabilize the countries in question. The elites use the terrorist threat as a justification and rule with a firm hand, which deepens radicalization. As a consequence, the countries are in the grip of self-perpetuating mechanisms in which politics fuel terror and vice versa.

Michał Romanowski is a program coordinator with the German Marshall Fund of the United States in Warsaw.