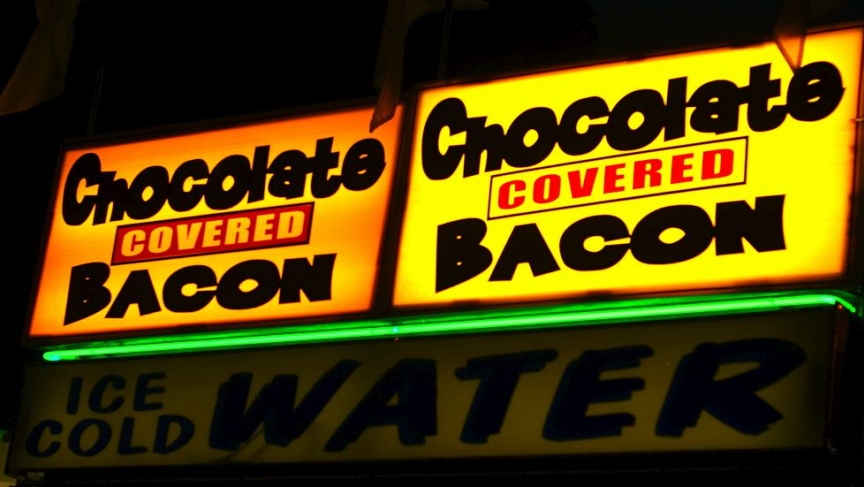 You are what you eat, or so the saying goes. And much of what we eat — and how we eat it — is influenced by what linguist Dan Jurafsky calls the "grammar" of food.

“The grammar of cuisine is the idea that every culture has a different way of thinking about what makes up a meal," says Jurafsky, whose new book, The Language of Food, comes out this month.

Part of what makes up a meal are the words that we use to describe it. Take the word entrée, for example. Americans think of an entrée as the main course — the meatloaf or the roast chicken. But the French word actually means "entrance." On a menu in France, an entrée is more of an appetizer.

But if you think Americans simply messed up the original French, you're wrong. Americans actually got it right, according to Jurafsky. The original meaning of entrée — as it was used during the late Middle Ages and early Renaissance — was much closer to the American meaning. It meant a heavy meat course that was just the first of many meat courses to come.

“So American English kept that sense of a substantial meat course, and [from] France and then England came some sense of this idea of entrance," Jurafsky says. "So the word really changed in France and England from meaning a heavy meat course to meaning a light appetizer."

The grammar of food impacts not only the order of the meal, but the types of dishes that are acceptable to eat at different times during the meal.

“We grew up with these rules that say that the salty things happen first and the sweet things happen at the end," says Jurafsky. "And coffee is a morning thing or maybe a dessert thing, but certainly not a main course thing.”

Of course, the rules are broken all of the time: savory is mixed with sweet, dessert becomes the main course or the meat becomes the dessert. Think bacon ice cream or cappuccino-flavored potato chips. They make an American eater do a double take because they violate the American rules of culinary grammar.

But some things just don’t translate, like one of Jurafsky’s favorite Chinese delicacies: hasma, a Cantonese sweet soup. It's made of a mix of dates and frog fallopian tubes. 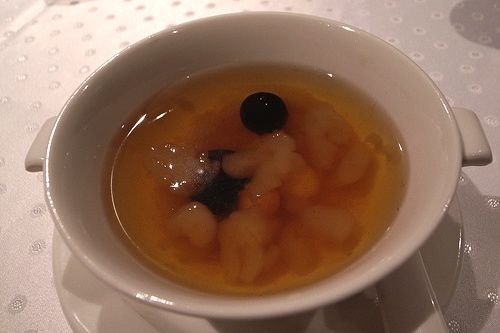 Hasma, a Chinese sweet soup or dessert that combines the dried tissue around the fallopian tubes of some frogs with jujubes (red dates) or other fruit.
Credit:

“Texture is very important in Cantonese foods, so there’s your crunchy things and slimy things," Jurafsky explains. "There’s a lot of very slimy foods in lots of cultures that don’t work ... in the grammar of American food."

Then there are some food items that seem universal, like tea. Tea was introduced to the world via China. Lots of languages have a word that begins, like the English word, with a “t” sound. But many others, like Arabic or Russian, use words that start with a “ch” sound, like “chai.”

“All the languages that got tea via the south of China from trading with the Fujianese, all of those languages pronounce the word with a ‘t’ because they got it from the English or the Dutch — who got it straight from the Fujianese," Jurafsky explains."Everybody else who uses a word like ‘chai,' they got the word over land from China through Central Asia, where the northern Chinese dialects start with a ‘ch.’"

In his book, Jurafsky also looks at correlations between the description of food and food quality. By analyzing restaurant reviews online, he found that food descriptions often fell into two categories: sex and drugs.

“If someone likes an expensive restaurant they use amazing sensual terms: ‘orgasmic pastry,’ ‘very naughty deep fried pork belly,'" he says. "There’s something about sex and food that’s obviously linked, but it’s interesting that we only talk about that when we’re thinking about our expensive restaurants. Expensive food is a sensory pleasure, just like sex.”

Cheap food is another story: “‘Oh, those wings, they're addicting.’ ‘The chocolate in their cookies, they must have crack in it.’ It’s as if the food forces us to eat it. It’s not my fault that I ate those wings. The wings forced me to devour them. It lets us distance ourselves from eating these awful foods."

The meanings of many food-related words have often been lost to history. Like why do we "toast" someone at the dinner table? What does a celebratory act have anything to do with charred bread?

Turns out toast was long ago used as a seasoning agent for wine. We used to put grilled bread in wine with spices to enhance its flavor.

“And people said ‘Oh, the belle of the ball, the lady of the evening, she spices the party like the toast spices the wine,’” Jurafsky says. “So there are these historical explanations for how the word came about. But it’s true that, as a modern eater, you just have to learn the words.”