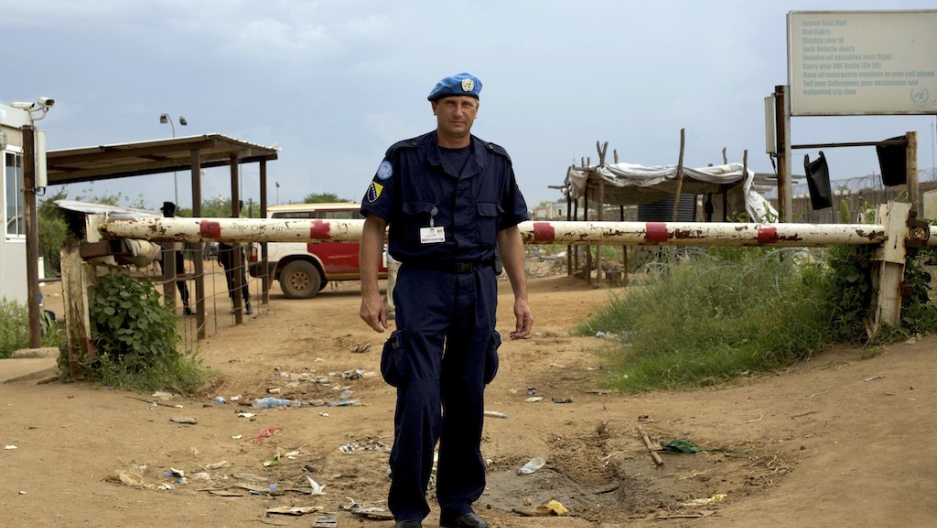 JUBA, South Sudan — In July 1995, Nedzad Handzic survived the Srebrenica massacre. More than 100 of his relatives, friends, and neighbors did not.

When Serbian troops descended on the Bosnian city, United Nations peacekeepers who had declared it a safe haven stood by as 8,000 people were killed. It was a dark, shameful episode in peacekeeping’s short history, and one the UN has endeavored not to repeat. On March 18, 2015, Serbian authorities made their first arrests in the decades-old case.

On Dec. 15 that year, he watched from inside the UN compound in Juba as terrified civilians, mostly women and children, began to throng the gates, hours after a fresh round of civil war had erupted.

“When it started happening, all the memories of Srebrenica, all the faces, came back to me,” said Handzic, a father of two. The career police officer has been part of UN peacekeeping forces in South Sudan since early 2012.

“I remember thinking, ‘What happened in Srebrenica must not be repeated here.’”

Handzic had been awakened earlier that morning by the sound of gunfire coming from the center of the capital.

It was 1 a.m. The shooting was sporadic at first, but by dawn there was sustained gunfire all over town — some of it very close — and then the louder sounds of tanks and artillery. “Moment by moment shooting was growing, more and more,” said Handzic.

A lull in the middle of the afternoon gave civilians their chance: they grabbed their children and what few possessions they could carry and headed for the large UN base next to Juba’s airport, where they begged for protection.

At first they came in small family huddles. Then entire neighborhoods started showing up together, until there were more than 5,000 people gathered outside the UN gates.

“You could see on their faces that they were very scared. They were civilians, they were not part of the fighting,” Handzic said. “My opinion was: if we don’t open the gates these people will be killed.”

Handzic briefed his superiors. On his advice, a request was sent to headquarters in New York asking permission to open the gates to let the people in. Within two hours Handzic was at the western gate with a team of 16 UN police officers ordering it open.

“In that moment you could see they felt somehow that they were protected, they were safe now,” said Handzic.

More from GlobalPost: South Sudan has reached the lowest point in its entire history

Everyone who entered was searched. As dusk fell, the terrified civilians filed in silently and lay where they could — on the dirt road or among the undergrowth on the edges — as the shooting in town grew to a crescendo again.

Other UN bases around South Sudan followed Juba’s lead. At the peak of the conflict, more than 100,000 people sheltered behind the razor wire of UN bases. Not all found protection: in April an armed mob forced their way into the UN base in Bor, attacking and killing dozens of the civilians inside.

No one has yet counted the dead in South Sudan’s new civil war. An estimate of “over 10,000” was made months ago and has not been updated since. Nor has the fighting stopped. But it could have been a lot worse.

“Had we not opened that gate a lot of people would have died,” said Handzic. “My very bad experience I had in my country — a situation very similar to this one — I felt it would be similar here if we did not take action.”

“My people, my relatives, my cousins,” he said, “if somebody did [in 1995] what we did here, those people would be alive today.”