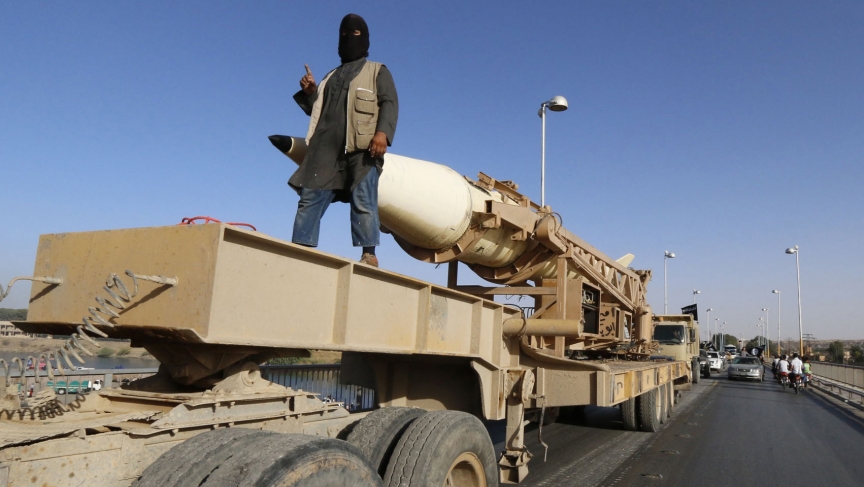 A militant Islamist fighter gestures as he takes part in a military parade along the streets of Syria's northern Raqqa province on June 30, 2014. The fighters held the parade to celebrate their declaration of an Islamic "caliphate" after the group captured territory in neighboring Iraq.
Credit:

If you've been following the news out of Iraq and Syria over the summer, you've heard about the group that calls itself the Islamic State ... or ISIL ... or ISIS ... or something.

News outlets aren't much help — all of us seem to prefer a different style for the group. Governments aren't any better. But the French government broke new ground this week by announcing it will call the group by its Arabic acronym: "Daesh," or "داعش" if you prefer.

Daesh simply stands for "Al-Dawla Al-Islamiyya fi al-Iraq wa al-Sham." That's the exact same phrase as "Islamic State of Iraq and al-Sham [aka the Levant]," which people use to form the commonly-used ISIS and ISIL. But the group reportedly hates the term.

For one, it just sounds ugly. But there are deeper reasons. "It’s been said that one of the reasons they don’t like it is that it’s very similar to another Arabic word: Das [دعس], which means to step on, trample down or crush," says Tarek Masoud, a professor at Harvard's Kennedy School of Government.

And indeed, it's the anti-ISIS crowd that uses Daesh for the group. Masoud says the word Daesh is used in a Free Syrian Army slogans that makes use of the pun, saying something like “the Free Syrian Army is stepping on Daesh and on Assad."

There's also the issue of legitimacy. The group wants to be called by the name it has chosen for itself, which is “the Islamic State." That gives it a very theoretical claim to the world's Muslims and the historical weight of the caliphate. Calling them anything else denies those ambitions, making them just another armed group.

Masoud says those claims have sparked a big debate in the Arab world about the group. Many Muslims feel that ISIS — or whatever — is impromperly trying to claim "the mantle of Islam" and want to reinforce "real Islam" against the extremist version.

Of course, none of this really solves the argument over the name. Masoud says he's had debates among his friends and colleagues about the best way is to refer to the group. He personally prefers ISIL, as does the US government. Others like ISIS, which Egyptians hate because it's also the name of an ancient Egyptian goddess.

But what's really important, Masoud says, is that the group doesn't represent his Islam: "As a Muslim American, I chafe whenever I hear this group of thugs referring to themselves as an Islamic anything — and I do like when the French deny them that."